We in RGA are hosting this guest article as call to action from trusted local antifascist organizers, we ask that you share this throughout social media, on blogs and everywhere possible to signal boost and spread the word!

Islamophobes plan to hold a rally at the state Capitol in Austin on June 10th against “sharia law”. We must first and foremost defend the people against these organized fascist hate groups. We have recently seen fascists converge on Austin in an attempt to make our city the Berkeley of the south. The far right sees Austin as a crown jewel which it wishes to capture; they want to be able to hold open hate rallies and move without being impeded. To do this, they need to go through the organized antifascists and the people of Austin. They see this city as a liberal oasis and like Berkeley they wish to combat this with uncompromising violence to go with their hateful rhetoric.
They have recently been known to ship fascists into town from all over the state to better carry out their reactionary agenda. This is the only chance they have at giving local antifascists a run for our money. This call can been seen from some of Houston’s most outspoken Neo-Nazis like William Fears, who in a recent video encouraged other fascists to converge on Austin specifically to attack the antifascist presence here. The fact that this video was produced by ex-con Fears who openly admits to being a Nazi and has a criminal record which includes aggravated kidnapping charges, burglary charges, criminal conspiracy and acquiring a fire arm with falsified documents should come as no surprise. All the far right calls for “law and order” are just more lies they tell to confuse people away from seeing these scum for what they are—predatory human-hating bigots.
The whole country reads report after report of white supremacist terrorism from a media which never calls it what it is—terrorism. Just this week we see news out of Portland Oregon where a white supremacist that was harassing some women he perceived to be Muslim turned to kill two men who tried to talk him down, seriously injuring a third. A man with a huge Swastika tattoo attacked and stabbed six people in Austin last year. It is clear that these people pose an immediate and real dangerous threat. We must seriously prepare to mobilize statewide networks of antifascists that can not only hold their ground in preventing the capitol city from hosting fascists, but can also popularize our struggle. Hundreds of antifascists, Muslims, immigrants and other Texans plan on countering the fascist event on June 10th. We humbly ask that you and your crews join us in giving the fascist scum a welcome they will not soon forget. If you love the people of your community, oppressed people and working people, then it is simple: you cannot tolerate fascists. Please invite your friends, your families, your co-workers, your classmates and everyone you know, car pool to Austin, and take a part in the historical struggle against fascism which is composed of many small battles like this one. 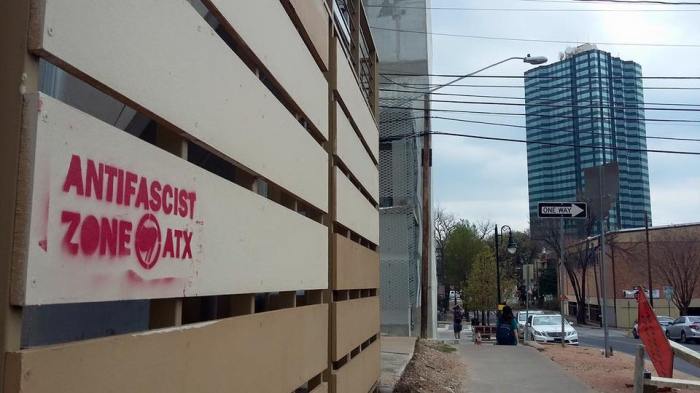 There is a multitude of events happening to confront the fascist activity which provide space for a diversity of tactics; no matter your methods for fighting back, or your level of comfort, you are needed and there will be room for you. No one in this struggle should feel more or less important than the next. We must all understand our personal and collective roles in stopping the spread of fascism. Just as a hand has many fingers, we must have many forces. It is when we come together and make a fist that the fascists can be halted in their tracks.
Our principle task must be to deny them movement, drown out their rhetoric and defend our communities. We must ideologically and physically confront them at every possible turn while emboldening others to do the same.
The fascists wish to blame Islam for the existence of ISIS, but it is leftist antifascist forces which deal the most shaking blows to ISIS fascism. Texas islamophobes have more in common with ISIS than anyone else and are fueled by the same kind of reactionary hatred. Do not let them terrorize the very same community that has suffered great wounds at the hands of ISIS. Do not let them turn tragedy into a rallying cry for fascism. These Trump supporters might be unwilling to accept the reality that their great leader supports Saudi Arabia, a reactionary regime which abuses the people under their dogmatic understanding of “sharia law,” but we do not fail to see the irony. We must make it clear that we stand with the Muslim community against both ISIS and these domestic reactionary bigots.
We call on all antifascists from around the state and region! We ask for your help in shutting these bastards down, defending the Muslim community and striking a blow against fascism. The far right has chosen Austin as a key trench in their war, let’s bury them in that trench under a sea of anti-fascist resistance. Let’s come together with dignity, for victory.
Make Austin the grave of local fascism
¡No Pasarán! 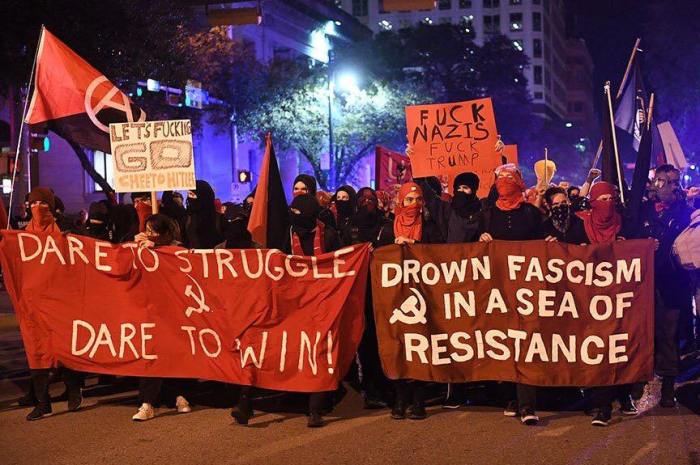 Posted by maoistroad at 8:04 AM