We hereby report on some developments of the revolutionary movement and the class struggle in general in the Nordic Countries during the past weeks.
Norway
Comrades from Serve the People Media have reported on some developments in the anti-fascist movement in Norway. The recent anti-fascist protests have taken place against the fascist organization SIAN ("Stop Islamization of Norway").
In Arendal on the 6th of August, activists reported the participation of more than 200 masses in the anti-fascist demonstration. Among the participants was the Struggle Committee (kampkomiteen.org). A video was published showing the demonstration, in which the police acted as defendants of the fascists, arresting three people and knocking one unconscious.


On the 7th of August in Kristiansand, SIAN likewise attempted to distribute leaflets, but were met by more than 150 counter-demonstrators. The leaflets of the fascists were ripped apart, they were drowned out by chants and eggs were thrown against them. Three people have been banned from the city as a result of the protests. 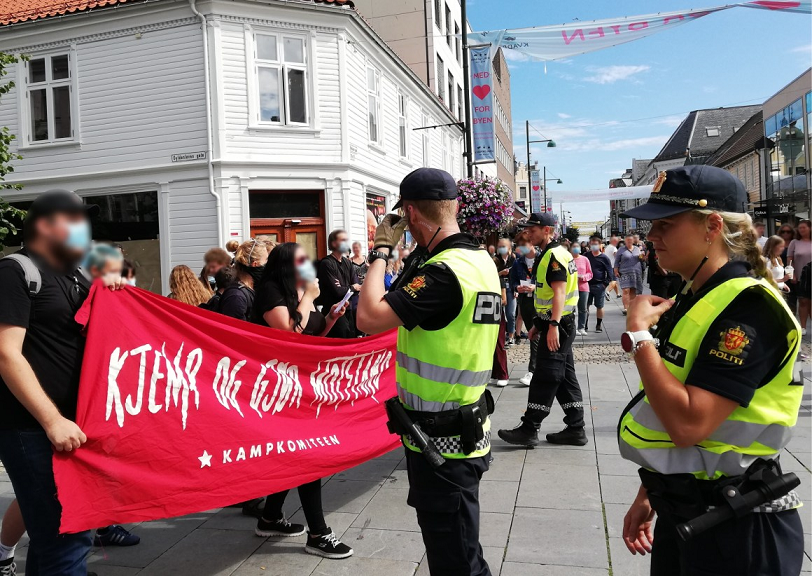 Synthesizing the recent struggles, Serve the People Media states: "2020 has hitherto been a miserable year for fascism and a great year for the struggling masses, who have directed their justified anger at both fascists and police. The increased resistance leads to hard repression and persecution, which is the other aspect of the victories won on the streets".
The Struggle Committee additionally participated in a manifestation on the 7th of August against the repression of Mapuche activists in Chile. Slogans against political repression of various kinds were put forward. Comrades of the Struggle Committee raised the slogan: "Honor and glory to Garett Foster!", honoring the US comrade who was recently martyred in the people's uprising in that country. 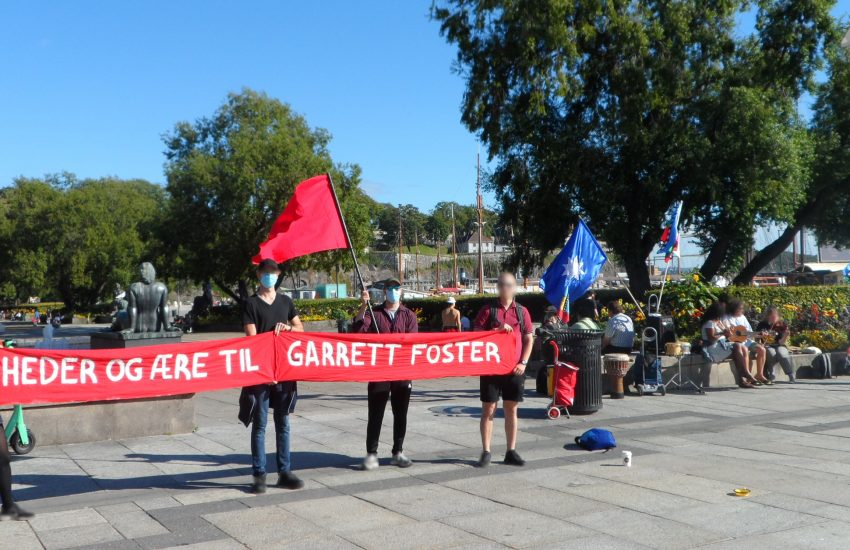 Finland
The Maoist Committee in Finland has published a statement condemning the trial of the communists in Munich, who were charged with membership in the TKP/ML, which leads the People's War in Turkey. The statement is entitled: "Long Live the TKP/ML! Down with the Persecution of Communists!", and can be read here.
Additionally, paintings have been done in various cities in Finland in solidarity with Austin's Targeted Three, that are being persecuted by Yankee reaction for the "crime" of participating in the people's uprising in the USA. 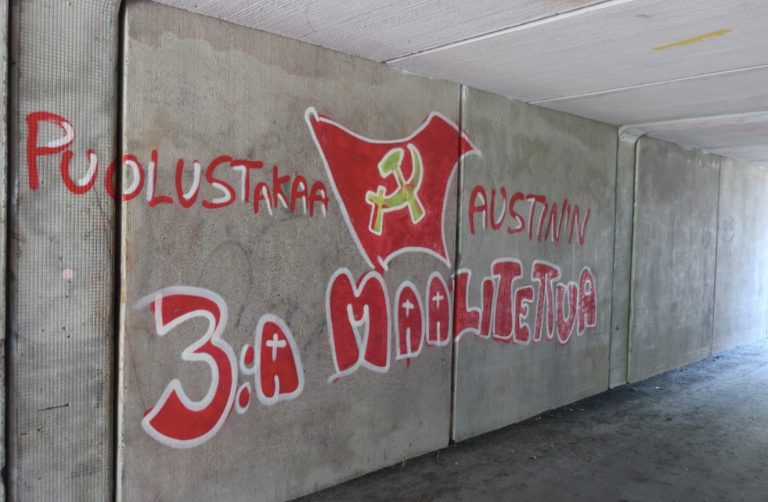 Sweden
In Eskilstuna, activists have put up posters from the Communist League of Sweden, raising the slogans: "Organize for a Socialist Revolution! Construct a Revolutionary Communist Party!" and "For a Class Line in the Women's Movement!". 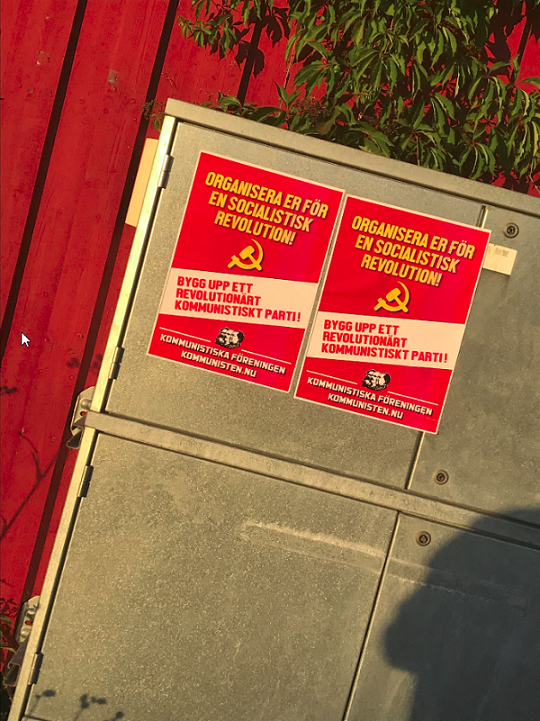 Denmark
Activists from Common Action Copenhagen participated in the recent demonstrations against the visit of Yankee imperialist foreign secretary Mike Pompeo to Denmark. A Yankee flag was burned and the slogan: "Yankee Go Home!" was raised.
An article was published on the blog Socialist Revolution, with an analysis of the collusion and strife of Yankee imperialism and Danish imperialism, especially regarding the Arctic colonies and semi-colonies of Greenland, the Faroe Islands and Iceland, and an analysis of the class character of the protests against Mike Pompeo. 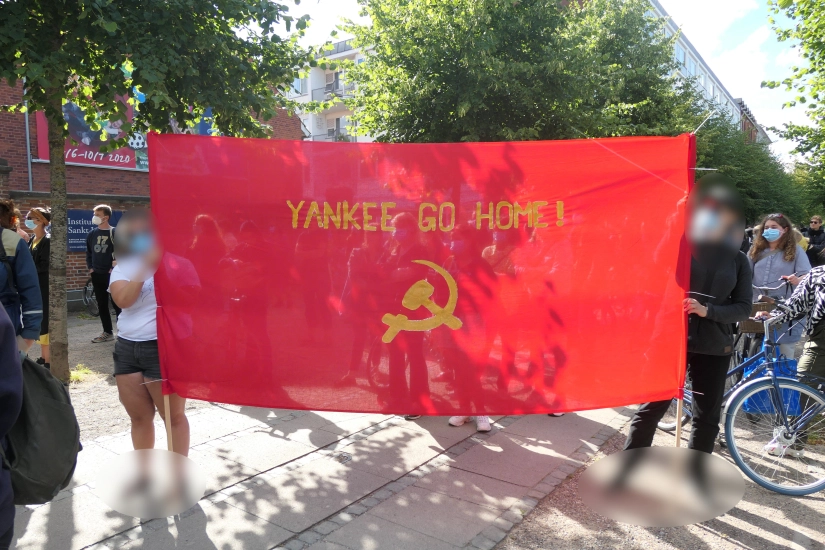 Posted by maoistroad at 9:34 PM No comments:

Germany On the most recent cases of Police Violence in Freiburg 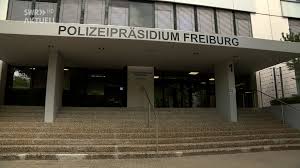 Due to the growing negative public opinion about the cops and encouraged by more and more victims of racist or otherwise motivated police violence coming forth with their stories, we experience in recent times that an increasing number of people speak of their experiences with the cops whenever we are in the proletarian neighborhoods or directly seek our contact. Henceforth, we document some of the most recent assaults in Freiburg:
In early May, Gali, a young black woman, spent the evening outdoors with friends. After about two hours, the police came in a patrol car to check them under the pretext of Corona measures. Two weeks earlier, one of the police officers had made fun of the non-German name of one of the affected. During the inspection he made repeated racist comments, whereupon she confronted him. The cop wanted to carry out a search afterwards, which the young woman resisted because she had not committed a crime. The police then called reinforcements. When a policewoman tried to grab the victim, she backed away. Then everything happened very quickly, Gali was thrown on the floor, her head hit the pavement. One of the cops kneeled on her shoulders and eight police officers pushed her to the ground. They then put her in handcuffs and ankle cuffs to take her to the station, where she was thrown to the floor again and then handcuffed to a chair. She then published her experiences on a social media profile, whereupon the cops tried to silence her with a charge of defamation.
A similar situation arose last Sunday in the square of the Old Synagogue. Hundreds of Freiburg residents meet there every evening to sit together, listen to music and enjoy the evening after work. On August 16, the police picked a single group of teenagers who they accused of listening to music too loudly. After the group willingly turned off the music, the police came back a little later and claimed they were talking too loudly. This claim is completely absurd since, as mentioned earlier, there are hundreds of people every evening and the volume level is always very high. The cops then wanted to check ID cards and were very aggressive. When one of those present asked for the police to speak to her in a normal fashion, they pushed her to the ground, injuring her face and elbow. Then she was handcuffed and taken to the police station.
In addition, we want to report on the following incidents:
dem volk dienen
Posted by maoistroad at 9:31 PM No comments:

Posted by maoistroad at 9:30 PM No comments: