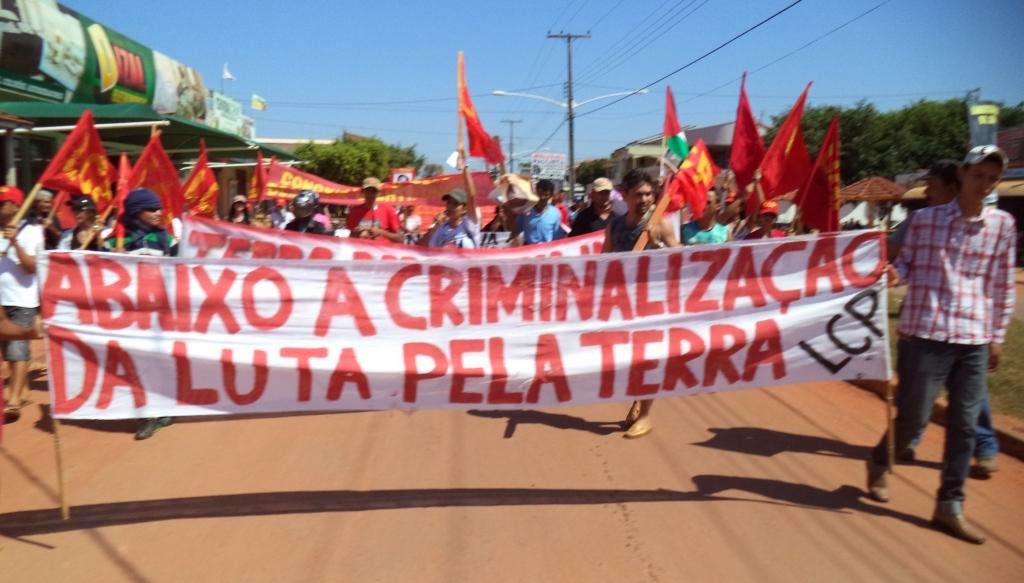 We hereby publish an inofficial and preliminary translation of a very important article on the peasants struggle in Brazil published by A Nova Democracia:
Below, we reproduce an article from the Resistance Peasant portal about the capture of the last lands of Santa Elina that occurred 25 years after the historic Battle of Corumbiara.
In the early hours of August 16, dozens of peasant families led by the League of Poor Peasants of Rondônia and Western Amazonia took the latifundio Nossa Senhora, the last part of the old Santa Elina farm that was still in the hands of landowners. These are lands where the Heroic Peasant Resistance of Corumbiara occurred 25 years ago.


Located in the municipality of Chupinguaia, on the MC01 line, about 675 km from Porto Velho, the Nossa Senhora estate belongs to a third of the old Fazenda Santa Elina and has approximately 6 thousand hectares of land owned by a single family who have been enriched at the expense of illegal use of these public lands for extensive livestock. According to information from the peasants, the title of property and the Contract for the Disposal of Public Lands (CATP) are falsified by the landowner who claims to be the owner of Fazenda Nossa Senhora.
While landowners falsify documents, enrich imperialist countries, destroy our forests, exploit pedestrians, murder peasants and indigenous people, the thousands of small and medium-sized peasants are responsible for more than 70% of the food production that supplies the Brazilian table, according to last census of the Brazilian Institute of Geography and Statistics (IBGE).
With this new take, the lands of Nossa Senhora, previously exploited for the benefit of a few and to serve foreign interests, will now be cut off for hundreds of families to produce food and prosper generating income and moving the economy of the cities of Chupinguaia, Corumbiara, Cherry trees and region.
The takeover takes place exactly one week after the 9th of August, the date on which it celebrated 25 years of the heroism of the peasants who opposed with fierce resistance against the planned attack by the landlords and the old state that became known as “Corumbiara Massacre”.
With the occupation, the peasants in practice demand justice for the crimes of the land thief who has their hands stained with peasant blood.
The families' entry into the Nossa Senhora latifundium was received with great enthusiasm and animation by the peasant masses of the neighboring areas, in addition to the small and medium traders in the region; everyone has expressed active support through food donations. On the first day of the intake, more than 20 liters of milk arrived to help many mothers with their young children.
The profound general crisis of bureaucratic capitalism aggravated by the pandemic and the consequent worsening of people's living conditions with the reduction of the already meager jobs in the cities of Rondônia have thrown thousands of workers into unemployment, causing more and more masses to see land grabs of the latifundium as a way out of the crisis, confirming in practice what the LCP has affirmed in its slogan “Against the crisis, take all the land of the latifundium!”
The new takeover has attracted peasants from several neighboring regions and has led many of the families already living in the surrounding areas to call on family members to conquer them also their piece of land and the right to work.
Every day more and more families arrive to camp and fight for a piece of ground to work and produce.