“The flag of the October Revolution is invincible!”
- Mao Zedong

This year marks the Centenary of the October Revolution. Imperialists, reactionaries, reformists, and all kinds of opportunists are making efforts to delete, obscure, denigrate and sully this event, as they did last year with the 50th anniversary of the Great Proletarian Cultural Revolution.
They do so because they know that the great message coming from these events for the proletarians and the masses is more and more present.
To get rid of imperialism, capitalism, war, exploitation of the proletariat and oppression of peoples we must make the proletarian revolution!
The working class must tear off the political power from the ruling classes, establish its power, its state─the dictatorship of the proletariat─and construct socialism; it must develop and continue the revolution in each country and in the world to get rid of all the chains of imperialism and march towards communism world-wide.

The imperialist system shows to be what Lenin analysed and described in his great work “Imperialism highest stage of capitalism”: a rotten and decadent system.
Imperialism and its governments, at all latitudes, continue crossing a deep economic and financial, political and social crisis, and unload their crisis on the proletarians and the masses internally, and on the oppressed people and nations internationally.
Imperialism is economic war, war of aggression and looting for a new division of the world.
Imperialism is reaction and fascism. Imperialism is the last stage of capitalism and shows every day more the need to overthrow it.
That is why the message of Lenin and the October Revolution is more alive than ever!

In the US, under the strongest imperialism, Trump’s victory reflects the crisis of Yankee imperialism and its attempt to get out of that accentuating the economic war, the military rule, the control on geopolitical strategic regions, redefining the alliances in the different theatres of war in the world.
Trump’s victory shows the barbarity of the so-called “American democracy”: a fascist billionaire in power, waging war against the poor masses internally and the oppressed peoples internationally.
Trump’s victory feeds, in all imperialist countries, the reaction, the police State, militarization, permanent emergency state and internal war against proletarians, women’s rights, against Afro American people, against immigrants with walls and expulsions, against Muslims and Arabs, against any progressive idea in schools, universities, mass medias, culture, art.

The new aggressive phase of US imperialism sharpens the inter-imperialist contradictions, with Russian imperialism, atomic superpower; with China, new social-imperialist power; and with the countries of imperialist Europe, currently under the German hegemony.
The global contest between the imperialist countries for the division of markets and the fight to control the energy resources originates and feeds wars of aggression and reactionary wars, sowing death, massacres and destruction all over the world.

In all the imperialist countries, the states and the governments of the masters of the world develop an internal war against the proletarians and the masses, who are driven by the crisis, oppression and repression to fight and to rebel more and more.

In the countries oppressed by imperialism, proletarians and oppressed people intensify the anti-imperialist and national liberation struggles; in particularly we need to support the Palestinian and Arab people struggle against Zionist state and imperialism, and the people’s wars. From India to Philippines, from Turkey to Peru, the people’s war, guided by Marxist-Leninist-Maoist parties, is the reference for the way to get free from imperialism, the reactionary regimes and to build states of New Democracy, marching towards socialism.
The People’s War in India, today celebrating the 50th Anniversary of “Naxalbari uprising” that has opened this way, fights against massacres, Green Hunt Operation, repression against Maoists, Adivasi people, democratic and revolutionary intellectuals and students, against workers, peasants, women struggles, against national minorities; it shows that nothing can stop the people’s war and the liberation struggle of the people as nothing can stop international support.

The October Revolution and the great Lenin showed that we cannot fight and win against imperialism and its states without fighting revisionism and opportunism.

The objective conditions are favourable for revolution, because it is the principal tendency in the world.
All the forces of social-democracy, the ex “communist” parties became revisionists and reformists; they lose credit among the masses and proved to be useless tools to defend the living and working conditions of the masses, to oppose imperialism, war, fascism and the police state.
Beside the crisis of these forces, we are witnessing the rise of reactionary populist tendencies and fundamentalist reactionary movements that divide the masses to tie them to the car of this or that imperialism and, ultimately, to the most reactionary fractions of imperialism, bourgeoisie and the regimes serving them.
Proletarians and masses must firmly reject the illusions of the parliamentary and peaceful paths, aimed to disarm them, and boldly undertake the revolutionary path.

People’s War is the most advanced form to accomplish the revolution; that is why we must support it in all countries where it already begun and prepare it in all other countries, applying it to the concrete conditions of each country.
It needs to build genuine communist parties that will be the vanguard of the working class and leading core of all the people.
The Communist Parties, based on the revolutionary science of Marxism-Leninism-Maoism are built into the fire of the class struggle in close connection with the masses, for the beginning and development of the people’s war, applied to reality.
The Communist Parties must build the United Front of the exploited masses, of all sections oppressed by imperialism and develop the necessary tactics, according to the form that the political and military domination takes.

In the imperialist countries, the Communist Parties must integrate in their ranks the new migrant proletarians, by playing a vanguard role in their fight against over-exploitation, slavery, racism.
The Communist Parties must gather and organize the rebellion of the youth and the struggle of women as a powerful force for the revolution.
They must fight their own imperialism as the main enemy of the proletariat and the oppressed peoples, taking side resolutely with the masses of the nations attacked. Today in particularly we must fight against the imperialist occupation of Afghanistan, the imperialist aggression on Syria and nuclear menaces against North Korea.
The imperialist war and the reactionary dictatorship of bourgeoisie bring the need for the communist parties to equip themselves for opposing to imperialist war with people’s war and build their fighting force as nucleus of the red army.

The people’s wars, beside the policies of genocide, also face the pitfalls of peace negotiations, which, far from allowing people’s wars to grow in strength and consolidation in the view of the strategic offensive, are aimed to divert, suffocate and split them, to lead them to surrender.

Long Live the 100th Anniversary of the Great October Revolution!
Death to Imperialism! On the way to protracted people’s war in all the world!
Long Live the Struggles of Proletarians and Oppressed Peoples in the World!
Long Live Proletarian Internationalism!
For a Red and Socialist Future, Marching to Communism!

Posted by maoistroad at 11:57 PM No comments: 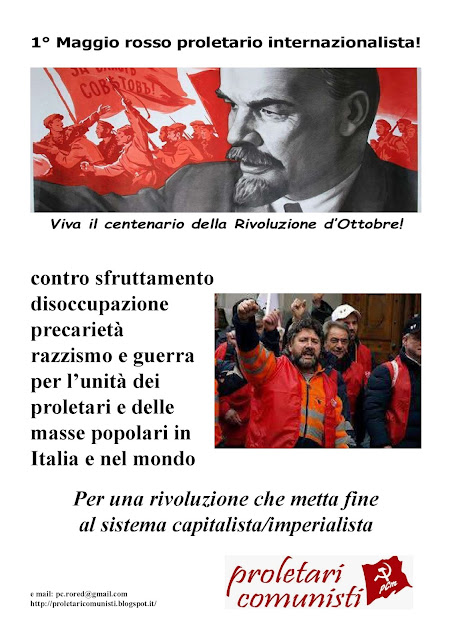 Posted by maoistroad at 9:10 AM No comments: 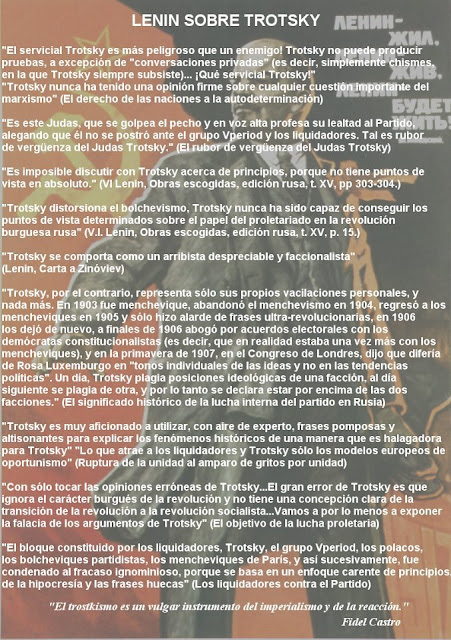 Posted by maoistroad at 8:57 AM No comments:

USA for debate - The Midwest Is Red: May Day message of the Kansas City Revolutionary Collective

part of the text

*
Today we are excited to announce the formation of a new Marxist-Leninist-Maoist collective in the Kansas City metropolitan area: The Kansas City Revolutionary Collective (KCRC). This is no small announcement as Kansas City has been without a Communist movement for some time now, other than Anarchist collectives the KC Left void is filled by the Alphabet soup of NGOs, Non-profits and otherwise “non-partisan” groups. How perfect of a day to announce the formation of our collective than on International Workers Day, the only holiday the proletariat can call it’s own. It is on this day where we walk in a tradition of those came before us; from the day the Red flag flew over Paris to the Red flag over Peking to the day the Red flag will fly over Manila. We are here to serve our role in advancing the world proletarian revolution. KCRC was in formation during the crisis that would come to later dissolve the Liaison Committee for a New Communist Party and has weathered the storm to push forward and cast aside the corpse that is the NCP(LC) to form a collective, small at first, but with the mission to revolutionize, educate and most importantly mobilize the oppressed communities in the Greater Kansas City Metropolitan Area. We seek to form a rival dual power to challenge and overthrow the capitalist and imperialist system that is in place. KCRC seeks to integrate ourselves into and promote mass struggles, while simultaneously providing communist leadership, as well as when necessary create mass organizations to take on the task of building the tools and infrastructure which shall be the vehicle of carrying out the revolutionary tasks of the proletariat. Through the creation of these mass organizations, united under the ideological and political leadership of KCRC, the basis of the unity of the revolutionary masses, on which the construction of dual power depends, can be solidified. As such Kansas City Revolutionary Collective (KCRC) shall be founded on the following basis:
1)       We are Marxist-Leninist-Maoist

The principles of Marxism-Leninism-Maoism (MLM) shall be the guiding force which shall inform the political practice and ideology of the Kansas City Revolutionary Collective. As an independent Maoist collective we recognize Kansas City, albeit more important than others give it credit to (it is a central hub for commerce) cannot exist in isolation, as can no other revolutionary collective in this country. With this in mind we are for the creation of a Maoist Communist Party in the United States and shall organize to create such a Party to lead a proletarian revolution composed of all oppressed peoples in this country as part of the global proletarian revolution. This party shall lead the proletariat in a Socialist Revolution in which the bourgeoisie shall be completely overthrown and the Dictatorship of the Proletariat established with the goal of elimination of all class distinctions and the eventual victory of Communism around the globe. Marxism-Leninism-Maoism represents the summary practice and synthesis of over 150 years of revolutionary class struggle with four focal points: The Paris Commune, The Russian Revolution, the Chinese Revolution and the Great Proletarian Cultural Revolution. Each progressive period marked a continuity and rupture with the pre-existing modes of thinking of the day, in each one, lessons and summations were drawn only after the fact. In classifying the revolutionary ideology of Marxism-Leninism-Maoism we also are drawn to three main components in the realm of philosophy, political economy and scientific socialism.
i) In the realm of philosophy Maoism has developed and stressed the fundamental law of contradiction, the unity and
Read more »
Posted by maoistroad at 8:53 AM No comments: