NEW DELHI: Angry protesters at Jantar Mantar tried to break police barricades as they gathered to mourn the 23-year-old braveheart and demand speedy justice for her.

The protesters clashed with the police, who are present at Jantar Mantar in large numbers, according to TV reports.

Police have imposed prohibitory orders around India Gate and Raisina Hill and barricaded all roads leading to the area, as well as shutting down 10 Metro stations in central Delhi.

"We will continue to protest even if they barricade major stretches of roads and shut all Metro stations... The police can't stop us from raising our voices," Praveen Pandey, a law student at Jamia Millia Islamia University said.

"We want speedy justice in the gang-rape case. We want strict laws. Till then, we will continue our protest," said Deepali Sharma, a student of Amity University, who came to the protest along with friends.

The protesters, including some elderly people, mourned in silence the braveheart who died on Saturday morning in a Singapore hospital.

"We will be protesting silently, but if the police become violent, we will also have no other option but to retaliate. We demand a special session of Parliament to discuss the issue of rising incidence of rapes in India," Rohit Chahal, state secretary of Akhil Bharatiya Vidyarthi Parishad said.

The 23-year-old gang-rape victim was cremated Sunday morning in secrecy after her body was flown in from Singapore, officials said.

The woman was brutally gang-raped on December 16 in a moving bus.

(With inputs from IANS)
Posted by maoistroad at 1:47 AM No comments:

A victorious decade of People's War in Mindanao

Proletarian of all countries, unite!
Celebrate the 119th Anniversary of Chairman Mao’s Birth

December 26th 2012, marks the 119th anniversary of birth of beloved leader of world proletarian revolution, the guarantee of triumph of international Communism, Chairman Mao. Organization of the Workers of Afghanistan (Marxist-Leninist-Maoist, principally Maoist) celebrates this glorious event. Why do we have to celebrate such events? Celebrating such events means to celebrate the qualified leaders of international proletariat. Why do we have to celebrate the international leaders of the proletariat? As history proves, and as comrade Lenin has pointed out, no class in the history has triumphed without having qualified leaders of their own. Celebrating the revolutionary leaders means celebrating the revolutionary efforts of the class, being concreted in leaders’ theoretical and practical contributions. Finally why do we have to celebrate Chairman Mao? Because, he is the one who developed Marxism-Leninism, the international ideology of the proletariat, to a new, higher and third stage, establishing Marxism-Leninism-Maoism.
What is the best celebration of Chairman Mao? It is to wage more people’s wars. It is to understand what Marxism-Leninism-Maoism is. It is to understand that: Today, to be a Marxist means to be a Marxist-Leninist-Maoist, principally Maoist.
International proletariat needs Maoism in order to fight feudalism, bureaucratic capitalism and imperialism. So, it is Maoism that is the guide to world proletarian revolution. All communist parties must uphold, defend and apply Maoism in order to follow the path of world proletarian revolution. There is no revolution without Maoism, and there is no triumph without continuing the revolution under dictatorship of the proletariat, waging more people’s wars until communism.
The revisionists of all kinds, the “new “revisionism, are preaching “Maoism” without application, Maoism without the question of conquering the conquest of power. They have replaced Maoism with armed revisionism (as is the case with” Left” Opportunist Line in Peru), and those in the right wing of “modern” revisionism, have shamelessly revived the path of parliamentarianism and peaceful developments. They have capitulated by bannering “Peace Accords” and are renegades of “Amnesty” and, are internationally, right opportunist Liners! The opportunist line, in both forms, either right or “left”, has one task and that is to serve for imperialism and to smash revolutionary tide. Centrism is nothing than revisionism in a “Maoist” covering, which only plays with words, and indeed, sides with imperialism.
In this glorious momentum of celebrating the anniversary of Chairman Mao’s birth, let us reaffirm ourselves in what chairman Gonzalo has taught us: People’s war until communism!
We believe that: to fight Avakianism, Prachandism and other revisionist and Post-Maoist Lines, it is necessary to study Gonzalo Thought. Let us study the International Line of Communist Party of Peru again. It was Chairman Gonzalo who opposed revisionism! It was he who formulated Maoism. So, to defend Maoism, we have to reaffirm ourselves in Chairman Gonzalo and his all-powerful thought. Internationally, after Chairman Mao’s death, there is only one great authority, capable to be called the greatest Marxist-Leninist-Maoist in the face of earth, and that is Chairman Gonzalo. However Gonzalo thought is the concrete application of Maoism to Peruvian reality, but, it also has some aspects which are applicable internationally. Those aspects are in continuation of Chairman Mao’s contributions to international ideology of proletariat. The thesis of militarization of the communist parties, and forming communist parties of a new type is one of the most valuable contributions of chairman Gonzalo to Maoism. Concentric construction of communist parties, the thesis of Great Leadership, and more than all, understanding Marxism-Leninism-Maoism, principally Maoism, as a synthesis, the question of formation and generating a “guiding thought” are other major contributions of Chairman Gonzalo. At the core of all of contributions of Chairman Gonzalo to Marxism-Leninism-Maoism is the unique message of “uphold, defend, apply Maoism, and for that cause, wage people ‘wars until communism!”
As mentioned above, the best to celebrate Chairman Mao’s anniversary is to wage more people’s war, nationally and internationally. Our organization is in preparatory phase of waging a people’s war. We know that: there will be no new democracy without smashing the old state, and there will be no new state without waging people’s war, leading to establishing base areas, liberated areas, revolutionary committees of masses, and finally establishing the conquest of power in all over our beloved country, Afghanistan. By celebrating Chairman Mao’s Anniversary, once again we reaffirm ourselves in Maoism and People’s war until communism!

Posted by maoistroad at 2:50 AM No comments:

On Mao's Birthday Democracy and Class Struggle have published a number of contributions starting with an article on Mao's' leadership methods written in 1943 which contributed to the deveopment of the mass line within the Chinese Communist Party.

The roots of the mass line go back to Leninism and we have recently published an article which shows Stalin was a exponent of the Mass Line prior to Mao's more fuller development of the concept in theory and practice.

The fierce intellectual Post Modern ideological assault on Marxism , Marxism Leninism Maoism in the late 20th century has burned itself out by this first decade of the 21st century has it has been hit by the reality of capitalist class power and class struggle.

The Leninist concept of the State and Capitalist power over the State reasserts itself in the 21st Century with Global Capitalism in profound Crisis.The basis of class power so vigorously denied has been reaffirmed by reality. Social power is Class power.

Parasitic Imperialism is more transparent than ever as a new era of Land grabs shake the globe aided by NGO's.

Jean Paul Sartre once famously said that Marxism had not been superceded because the conditions that gave rise to it still exist, concerning Maoism in the 21st century it is confirmed that Maoism is not superceded by Post Maoism or Avakianism has the intolerable conditions of global capitalism that gave rise to Marxism Leninism Maoism still exist. See Harsh Thakors Critique of New Synthesis

Henry CK Liu comment on China is relevant not just for China but for the world.

"The full impact of Mao's revolutionary spirit is yet to be released on Chinese society. A century from now, Mao's high-minded principles of mass politics will outshine all his neo-liberal critics".

On Comrade Mao's Birthday we call for defense of Marxism Leninism Maoism and the rejection of Prachanda's Neo Revisionism and Avakian's Post Maoism.

Democracy and Class Struggle
Posted by maoistroad at 2:27 AM No comments:

maoist road for a new year of advancement of international unity of mlm mouvement in the world against imperialism, revisionism and opportunism !

Posted by maoistroad at 9:14 AM No comments: 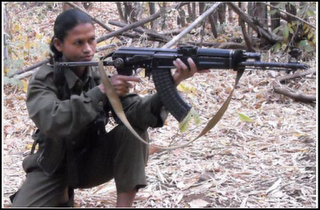 Towards a Seminar and an International Conference for building of a new international mlm organisation, after RIM's collapse 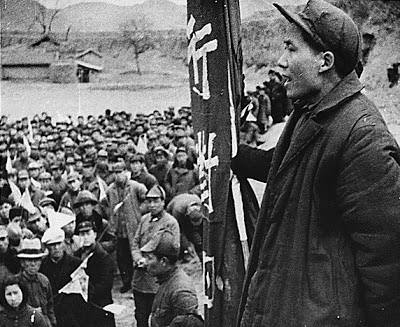 PCm Italy's celebration of 119 anniversary of the birth of Mao tse tung is a date plein of red fresh air for the success of International Conference to support people's war in india in Hambourg 24 november - against imperialism, revisionism and opportunism- also against 'left opportunists pretty bourgeois' - but this date is good for the launch and call for a strong step towards a most advanced task and objective indicated from the two Resolutions passed in the Special  Meeting  of some Marxist-Leninist-Maoist Parties and Organizations of the Revolutionary Internationalist Movement .

All comrades in the world can be sure: also these tasks will be realized !


"The new international organization must unite in its ranks the genuine MLM parties and organizations that exist and operate in the class struggle, that transform the revolutionary theory into revolutionary practice, that are able to be an advanced and integrant part of the proletariat and the oppressed masses, getting rid of all the old and new waste, not only of revisionism but also of the petty bourgeois revolutionaries and the self-referring "virtualism".
To build this new international organization we must break with revisionism in all its aspects and particularly with those that have led to the current crisis and collapse of the RIM, namely the post-MLM 'new synthesis' of Bob Avakian in the Revolutionary Communist Party,US and the revisionist line established by Prachanda/Bhattarai in the UCPN(M).
The new international organization should have an executive centre, whose internal life must correspond to the stage and methods shared by the political parties and forces that give life to this organization, particularly taking lesson from the positive and negative experiences of the CoRim.

from ....2nd Resolution passed by the Special Meeting of the Marxist-Leninist-Maoist Parties and Organizations of the Revolutionary Internationalist Movement for an International Conference of the MLM Parties and Organization of the world – May First 2012
Signed and spread by:
Communist Party of India (M-L) [Naxalbari]
Communist (Maoist) Party of Afghanistan
Maoist Communist Party - Italy.

Posted by maoistroad at 8:46 AM No comments: