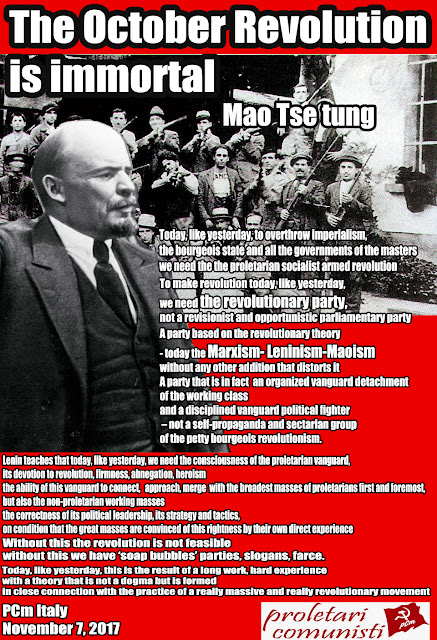 Today, like yesterday, to overthrow imperialism, the bourgeois state and all the governments of the masters we need the the proletarian socialist armed revolution
To make revolution today, like yesterday, we need the revolutionary party, not a revisionist and opportunistic parliamentary party
A party based on the revolutionary theory - today the Marxism- Leninism-Maoism without any other addition that distorts it
A party that is in fact an organized vanguard detachment of the working class and a disciplined vanguard political fighter – not a self-propaganda and sectarian group of the petty bourgeois revolutionism.
Lenin teaches that today, like yesterday, we need
the consciousness of the proletarian vanguard, its devotion to revolution, firmness, abnegation, heroism
the ability of this vanguard to connect, approach, merge with the broadest masses of proletarians first and foremost, but also the non-proletarian working masses
the correctness of its political leadership, its strategy and tactics, on condition that the great masses are convinced of this rightness by their own direct experience
Without this the revolution is not feasible
without this we have ‘soap bubbles’ parties, slogans, farce
Today, like yesterday, this is the result of a long work, hard experience with a theory that is not a dogma but is formed in close connection with the practice of a really massive and really revolutionary movement
PCm Italy

Posted by maoistroad at 9:51 PM