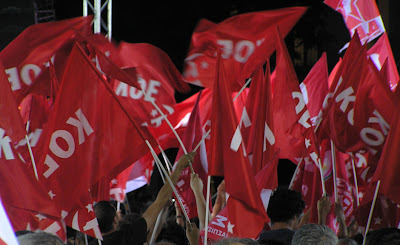 Thanks to Kasama for Translation


Democracy and Class Struggle publishes this statement with our own highlights of the statement to confront some distortions of the KOE's position on the European Union.

1) the Communist Organization of Greece (KOE) currently finds itself at the epicenter of an organized attack. It is an attack intended to strike at SYRIZA, the Coalition of the Radical Left, within which our organization has been such an integral part.

These last days, the political centers of the system (including the main conservative party, New Democracy, and their instruments at the highest levels of the media) have been displaying old posters of the KOE all over the TV and print news.

These posters opposed the European Union – and the reproducing of these posters in the media is declaring, like prosecutors of some monarchy, that it proves that our positions must be condemned by SYRIZA and we should be excluded from “the body politic.”

2) This is a desperate effort launched by the old political system – which seeks to deflect and obscure the core message of the recent May 6 elections in Greece. That message was that those forces in Greece who had supported the brutal agreements with the Troika (European Union, IMF, and European Bank) had lost all political initiative and had been defeated in the electoral arena.

The result is an attempt to spread confusion – at the same time that the reactionary forces are seeking to reestablish and regroup a unified political camp in opposition to the people’s camp.

They have chosen to proclaim a voluntary slavery under the banner of “Europeanism” – which they identify with the Memoranda imposed by the Troika and with those extreme measures demanded of us by powers outside Greece, by the imperialist powers and the “markets.”

They have chosen the tactic of polarization to get over with raw misery.

And they hope to use such means to hide other available social possibilities. However their campaign is very far from being convincing. Why? Because the forces making these charges against the KOE and SYRIZA are those at the head of an electoral list invented by the German Chancellor Merkel for the Greek national elections on June 17. And because it is clear that the purpose of this attack is precisely to reverse the gains made, against the Troika following the popular vote in the May 6 election.

3) As for the question of the disputed poster, which dates back to early 2010: Our poster expressed the long-standing position of the Left in Greece – which is to support the departure of Greece from the Euro zone and from the European Union in order to carry through a social and national liberation.

This is a goal which is, today, becoming more and more clearly within reach.

The first accord was made with the Troika in 2010 totally against the will of the Greek people.

It was signed by a “government” which had already lost all democratic legitimacy , and it introduced a special new kind of regime on Greece: A regime of a colonial type within the European Union, defined by these accords with the Troika and designed to enforce a politics of social extermination, a regime of economic and political occupation which annulled and abrogated the last vestiges of bourgeois democracy and national sovereignty.

In short, precisely since the beginning of 2010 the situation has changed in a dramatic way: Since May 2010 it is the EU Directorate headquartered in Brusselles (Belgium), and especially the German element, that has led Greece toward the exit doors of the Euro zone – in order to threaten the people of Greece, and to control the country politically. And, it is a given that in these scenarios, it is the Directorate (under German control) that prepares itself to control the terms and conditions of that expulsion.

As a result: It is obvious that the KOE has no choice but to resolutely oppose such an “alternative” plan by Germany – which would impose on Greece an extremely devalued “national” currency, precisely the kind Greece experienced during the Nazi occupation of World War 2.

4) At the same time this EU, characterized by an extreme neo-liberal set of policies and by domination under the German boot, is in sharp decline as the result of economic crisis, deepening poverty and rising unemployment – especially since the beginning of this year, 2012. In addition, the EU is bowing to a tide of political reaction – in a manor seemingly unmarked by any minimal observance of democratic legitimacy and marked by a rapid rise of a kind of new-fascism. This Europe must change! Map of the European Union — within which agreements have led to a freer flow of the workforce, reduced border controls, and now brutally extreme demands for cutbacks in certain countries. It is extremely important that today, all across the continent, working people are taking to the streets and making themselves heard in the national capitals and other cities.

That is how the people’s movement in Greece, which is truly without precedent and which had survived through ferocious repression, will be connected to the struggles of people all across Europe. This is how a new battleground is being created against this “Eurocracy.” This is creating the conditions for an effective counterattack against the neo-liberal plague – and this is how truly alternative roads will be created from the various peoples – both on a national and international level.

We have every reason to believe, judging by the recent political developments, that Greece and Europe may be moving on such a trajectory.

5) Based on everything we have just said, it should be clear why the slogan “Out of the Euro Zone!” has not been, for quite a while, one of the immediate demands of the KOE. And it is well known that our main goal and the main focus of our current struggle is, together with the people of Greece themselves, to dump the special regime imposed by the Troika and the political system that serves them.

At the same time we have thrown our weight behind the struggle against a Europe which is neo-liberal, anti-people, politically reactionary, and under German domination.

As expressed in the slogans put forward by our 3rd Congress: We are fighting for a different Greece within a different Europe.

6) The Communist Organization of Greece (KOE) has united its forces together with SYRIZA. As part of that, KOE hopes to contribute to important political insights and social perspectives to the struggle of our people. It is these insights which have given rise to such a panic among the anti-people forces, the imperialists and their “markets” – leading them all to search for savage methods and ridiculous arguments to use in a smear campaign against us.

Those forces, serving the Troika-imposed politics of social extermination and national destruction, will not succeed in landing heavy blows on SYRIZA, nor will they succeed in stopping the growing strength of the people. This faltering political system was severely punished on May 6. Now many things are working toward their total destruction.

On with the struggle!
For the rise of the people!
For a true democracy, national independence, and the creative reconstruction of the country!