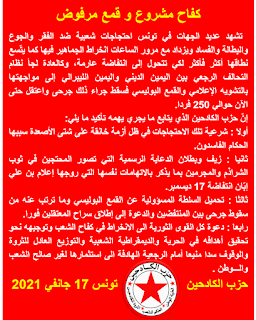 Elkadehines
Reactionary returns to Ben Ali's habit of monitoring hostile websites and deleting the Elkadehines party's statement on popular protests, the participation number reached more than seventy and readers about 3000 in few minutes, and this scared them, so they tried to closed this page, but they did not succeeded, so they used other malicious means to delete the statement and misery of what they did.
Here we repost the statement:
Statement: legitimate struggle and oppression rejected
Many sides in Tunisia are witnessing popular protests against poverty, hunger, unemployment and corruption, and as hours pass, the masses engage in it, as it expands more and more to become a total uprising, and as usual, the reactionary alliance between the religious right and the liberal right.
To confront her with media distortion and police oppression, the wounded and arrested so far about 250 people.
The Elkadehines party make clear and declare the following:
First: The legitimacy of these protests in the light of a strangling crisis at all levels caused by corrupt rulers.
Secondly: Fake and invalidity of the official propaganda that depict protesters in the garment of crimson and criminals, which reminds of the same accusations promoted by Ben's flags on December 17th uprising.
Third: Holding the authority responsible for police repression and the consequent wounded among the rebels and calling for the immediate release of detainees.
Fourth: Call on all revolutionary forces to engage in the struggle of the people and direct them towards achieving their goals in freedom, popular democracy, equitable distribution of wealth and standing in front of the reaction aimed at investing for the poor and the nation.
The party of Elkadehines
Posted by maoistroad at 10:25 AM