A new offensive of the genocidal operation "Green Hunt", under the name "Samadhan", is underway in India. 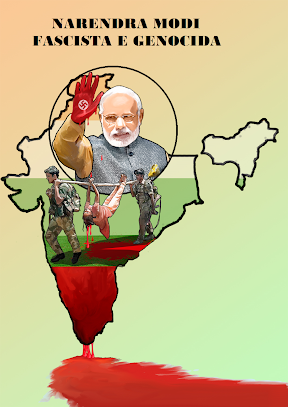 At the beginning of March 2021, the CPI (Maoist) denounced in a public statement the new offensive of the counter-revolutionary operation "Samadhan", a continuation of the genocidal practices of the operation "Green Hunt".

The events that have taken place and are taking place in recent years are clear signs that corroborate the statementsgiven by many human rights organisations, which are denouncing the atrocities being committed by the Hindu-fascist Modi government.

For example, since July 2020, police in the states of Telangana and Andhra Pradesh have increasingly harassed, intimidated,detained, and arrested Dalit and Adivasi activists, teachers, lawyers, and students, in a clear effort to silence the voices fighting for their rights. All those detained and arrested have been accused of being "Maoist sympathisers".

In 2021, the policy of repression and imprisonment was accentuated, being one of the most known and mediatic cases that of Nodeep Kaur and Shiv Kumar, trade unionists who were arrested and tortured after participating in the protest that the peasants have been carrying out since November 26th. On March 9, police arrested human rights activist HidmeMarkam in Chhattisgarh, also accused of being a Maoist.

An extensive harassment operation against organisations and activists in the states of Telangana and Andhra Pradesh was carried out on 1 April. A total of 22 raids were carried out by the National Intelligence Agency and local police. In Hyderabad, the NIA and local police teams raided the houses of Telangana High Court lawyer V Raghunath and Dappu Ramesh, a former member of Jana Nitya Mandali.

The policy of extermination against political prisoners, with torture and subhuman conditions in prisons, such as the cases of Professor GN Saibaba, Sudha Bharadwaj, Father Stan Swamy, Shoma Sen or Varavara Rao (recently released on bail). All these cases have been denounced by human rights organisations such as Amnesty International.

Torture and subsequent killing of political activists under the guise of "encounters". Between September and October 2020 alone in Telangana, 10 "suspected Maoists" were killed in fake encounters. On March 24 and 25 a strike was called by the CPI (Maoist) in protestfor the fake "encounter" on March 16 where four Maoists were killed in cold blood. Since November 2020, more than 150 people, including Maoist leaders and activists, have been killed.

Another case was that of A Velmurugan, a member of the Communist Party of India (Maoist), who was shot dead by the main anti-insurgency force of Kerala (a state ruled by alleged communists), Thunderbolt. The post-mortem report revealed that the Maoist leader was shot several times and had multiple bruises and may have been assaulted even after his death. Following this, human rights activists have alleged that Thunderbolt officials subjected Velmurugan to "inhuman torture after death".

These facts are clear signs that the Hindu-fascist Modi government is preparing a new offensive of the genocidal operation "Green Hunt", now called "Samadhan".

We cannot forget that one of the genocidal practices applied in the framework of this operation is the elimination and detention of social, trade union, student, or political activist leaders. This is inspired by the counter-insurgency strategy "Hearts and Minds" of the British Marshal Gerald Templer, which was later synthesised by Sir Robert Thompson based on the experience gained during the counter-insurgency campaigns carried out in Malaysia and Vietnam.

Part of this strategy is as follows:

"The government must give priority, not to the crushing of the guerrillas, but to the liquidation of the political subversion that gives them cover. By destroying the political infrastructure, the aim is to 'isolate the fish from the water', preventing the population from meeting the clandestine organisation".

Bauman stated that the first objective of genocide is to "decapitate" its leaders and centres of authority, thus eliminating cohesion and the ability to maintain its identity, losing its capacity to defend itself, and its destruction as an autonomous and united entity.

But the signs that the Hindu-fascist government is preparing a new genocidal offensive do not end there. In another part of the "Hearts and Minds" strategy it states:

"The government must not limit itself to restoring law and order through military operations, but must have a political, social, administrative and economic vision of the situation and of the measures to be taken in the military and civil order. It is a question of demonstrating that he governs effectively and efficiently".

To this end, since the beginning of the genocidal operation "Green Hunt" in 2009, a strategy of building roads in the states where the Maoist movement operates, with a network of more than 5,422 km, was drawn up with the clear intention of encircling the bases of support and preparing the ground for the realisation of a genocide. Of these, 54 roads with 1,988 km or almost 27% of the total roads were for the state of Chhattisgarh.

In 2020, the Hindu-fascist government opened 16 police base camps to "facilitate" road construction. In January 2021, they set up a police station at Tarrem on the Bijapur-Sukma border, along with a police camp at Bechapal overlooking the Bailadila hills. A 650-metre bridge over the Indravati river connecting Fundari in Bijapur with Abujhmad is also under construction. A camp of 165 CRPF Battalion was set up there in December 2020.

The Hindu-fascist government has sent five more CRPF battalions to Chhattisgarh, of which three have been deployed in Bijapur and two in Sukma.

This mobilisation of troops under the cloak of "development" is having serious consequences for the people there. Human rights organisations such as CDRO are reporting that in these areas, the military and police are carrying out rape, sexual harassment of minor girls, fake encounters, torture and death in police custody, demolition of houses and destruction of crops.

Notable in all this militarisation is the use of sophisticated weaponry such as drones as well as military cyber-security technology, all supplied by Israel. In 2018 alone India spent $5.84 billion on such weaponry.

But it is not only infrastructure, weapons and military technology that are being invested in, but also Civic Action programmes, with a series of training courses, sports activities, and handouts (handouts).  One example is as described by the military itself:

During this programme blankets were distributed to the needy people by 9 Battalion CRPF. Sh Ravindra Bhagat, Commandant of the same informed the people about the schemes of the government and the benefits of being part of the official line.

This is one of the initiatives of the Central Reserve Police to establish peace and harmony in the society. Officials and personnel of the battalion were present at the event".

In the face of all this evidence, is clear that the Hindu-fascist Modi government and the ruling and exploiting classes of India intend to re-intensify the war against the people under the mantle of the genocidal operation "Green Hunt" now called "Samadhan".

In fact, a plan to carry out massive attacks was decided in August 2020 in a meeting of police officers in Delhi led by Amit Shah. On April 3, 2021, Modi and Amit Shah's fascist police led by Bastar officer IG Sundar Raju launched a massive 'Samadhan-Prahar' attack on villages in Sukma-Bijapur districts with 2,000 men.

The terror caused by the fascist military campaign of the Salva Judum between 2005 and 2009 and later the genocidal operation 'Green Hunt' is well known, but the revolutionary movement faced it with appropriate political, organisational, and military tactics. Besides the resistance of the People's Liberation Guerrilla Army, the people's agitation and the firmness and determination of democratic intellectuals, artists, journalists, students, workers, and peasants from all over the world made it possible to defeat Salva Judum and stop the genocidal operation "Green Hunt", albeit by making countless sacrifices.

It is a historic task to spread agitation and solidarity all over the world to explain and confront the new genocidal offensive of the Hindu-fascist Modi government.