Mfpr Italy for KobaneSHOULDER TO SHOULDER WITH THE KURDISH WOMEN FIGHTERS 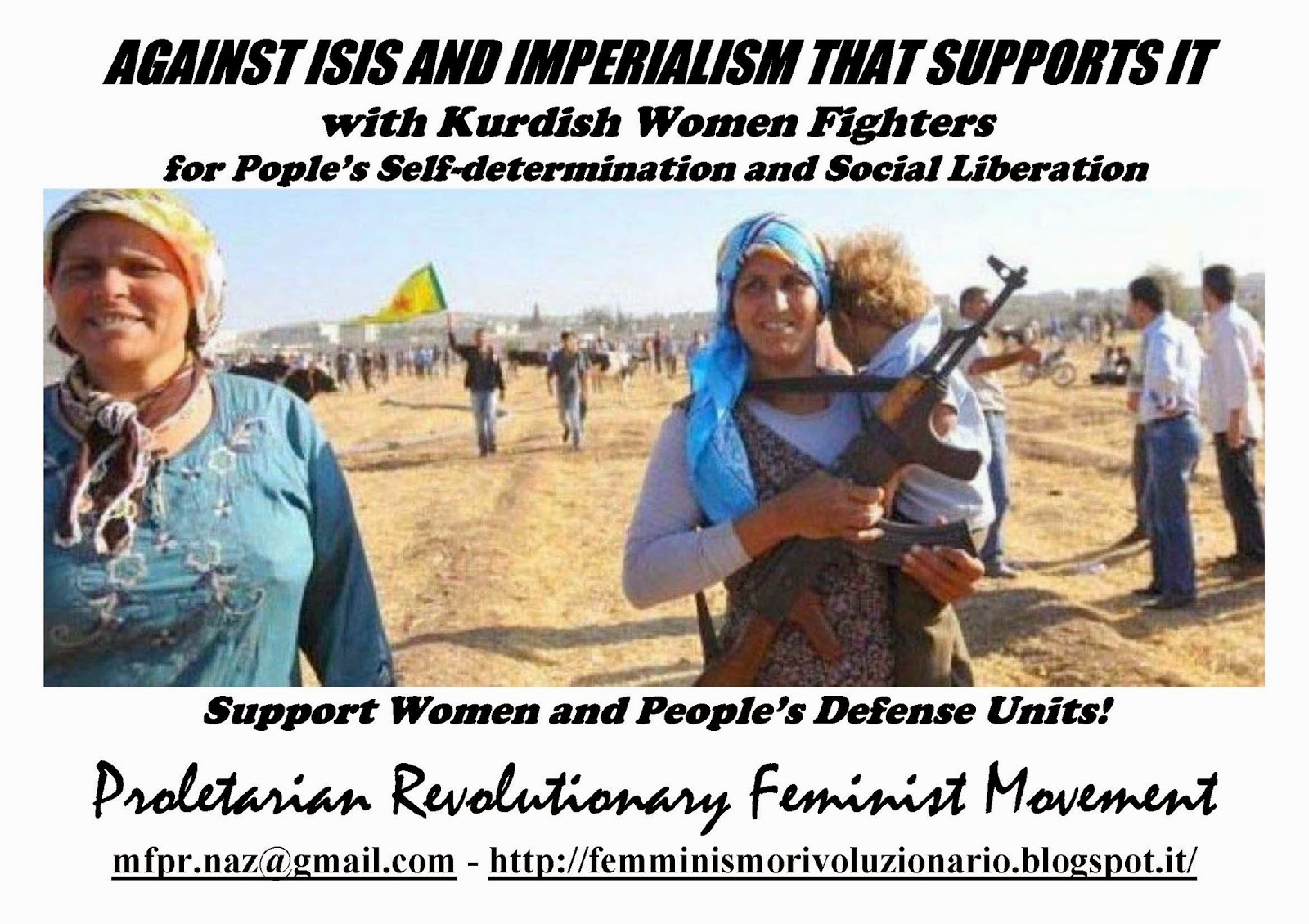 SIT-IN AT THE TURKISH EMBASSY!
Take up the appeal of Kurdish comrades

Let’s Organize, the same day, rallies and initiatives in every city of women in solidarity with the Kurdish women fighters, against Isis and imperialism!
From the interview with Asia, a Kurdish representative attending the meeting on 11 October:
" how can we do here in Europe, in Italy, to bring you our solidarity?"
“…... There are a lot of ways. First, we need more attention: you have to look at this situation as something you can live every day and affects all of us. Everyone of us can do something and makes pressure so that the Turkish government, instead of protecting ISIS, accepts the wounded people in hospitals in Turkey ... the people in Kobane say they need just a gesture, they want to know that the world is aware of this genocide. This is important for their morale.
Here in Italy you can also do something, because we do not see that the Italian government makes efforts to bring peace to that region ... Governments make war on people and women are the first to be colonized and enslaved ... In this society it is as if women do not exist, but women are the hart of people ... if you want to defend the people you must defend first of all the rights and freedom of women …”
From the interview with Pinar Aydinlar, revolutionary singer and communist activist:
“…Compared to other guerrilla and revolutionary struggles for national liberation, the particularity of this struggle is the important role played by the Kurdish revolutionary women.
Women who have refused a passive role, broke family ties, to take up arms and fight … It is an anti-imperialist struggle. Imperialists have always opposed the independence of Kurdish people, especially because they know that this movement is different from other autonomist movements, thanks to the role played by women… the role played by women has a great importance for all revolutionaries, communists, anti-imperialist and, at the same time, appeals all women, revolutionaries, to take the initiative and struggle in the front line to support this anti-imperialist struggle … women and children are the first victims of war and ISIS ideology, but women in Rojawa are not only of the first victims but also the first fighters ... women who leave home to fight not only for the self-determination of their people, but also to free themselves …”
Do not let go unheeded these requests for help and solidarity.
sit-in at the Turkish Embassy in Rome in 22 November
Because ISIS and Imperialism that supports it are our common enemies.
Because the best support that who live in an imperialist country can give to our Kurdish sisters is to struggle against imperialism, including Italy, vanguard of all barbarities.
Because ISIS, supported by Turkey, trained by NATO, sponsored by Western powers is a result of their system and we can and must fight it at its roots, also in our country.

Posted by maoistroad at 4:46 AM