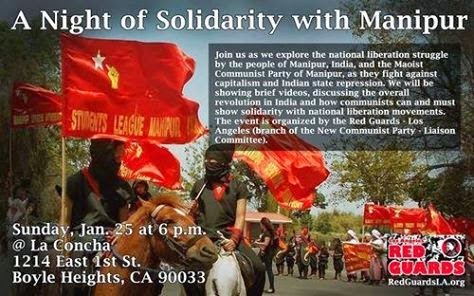 Join us as we explore the national liberation struggle by the people of Manipur, India, and the Maoist Communist Party of Manipur, as they fight against capitalism and Indian state repression. We will be showing brief videos, discussing the overall revolution in India and how communists can and must show solidarity with national liberation movements.
January 26, 2015, marks the 65th anniversary of the independence of India from British colonial rule. Tragically, the Indian nation suffers greatly from capitalist and imperialist plunder, with many oppressed nations/colonies within India, such as Manipur, struggling for liberation. We make our “Night of Solidarity with Manipur” intentional on the eve of Indian independence as a testament to the ambiguity of bourgeois Independence. We support the people of India that seek true independence, that is, communism. We support the people of Manipur that fight alongside them, and we as Marxist-Leninist-Maoist in the U.S. seek to build solidarity with their courageous struggle.
The event is organized by the Red Guards - Los Angeles (branch of the New Communist Party - Liaison Committee) out of La Concha, a community space of the Ovarian Psycos, a East Los Angeles and Boyle Heights-based radical womyn of color bicycling collective.
We will be exploring the role of communists in Manipur, and the larger context of India - studying the role of the Communist Party of India (Maoist) and their ongoing revolution against the state of India.
At La Concha1214 EAst 1st St.Boyle Heights, CA 90033
Posted by maoistroad at 11:22 PM