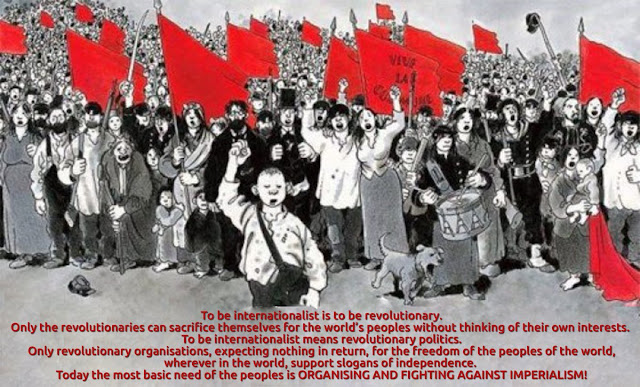 Long live internationalism!
Let us unite in the Anti-Imperialist Front, in the 9th International Eyup Bas Symposium for Unity of the Peoples Against Imperialist Aggression which will be held on 8-9 September in İstanbul - Küçükarmutlu!

Dear comrades,
We had previously made a call for participation to the revolutionary lawyers' trial on September 10 in Istanbul. Recently, the court decided not to bring 15 of the imprisoned lawyers to the court room. The reason was that they were in prisons outside Istanbul. Therefore, only Selçuk Kozağaçlı (who is also the chairman of Progressive Lawyers' Association) and Yaprak Türkmen will be brought to the court room. The other imprisoned lawyers are imposed to attend the trial via SEGBİS (court-to-prison video conferencing) system.
The imprisoned lawyers express this situation as follows; "We often remember Mussolini's words: 'How well I would govern the country if there were no lawyers!' We think that is the reason for this situation..."
The revolutionary lawyers have been in prison for 11 months because of a confessor-slanderer who gave statements with full of lies, on the revolutionaries.
They have been imprisoned, because they are revolutionary lawyers, and also they are the lawyers of the revolutionaries. And this kind of advocacy discomforted AKP government, because the revolutionary lawyers always stood in front of the government on every crime they committed against the people. AKP fascism did not want any single resisting person or a dissident voice, but faced with the revolutionary lawyers after every aggression against the people.
At last, the government "found a solution" by arresting them, while trying to intimidate the revolutionaries and leave them without advocacy. But they also couldn't succeed on this. Neither did the revolutionaries step back even once, nor did the revolutionary lawyers leave them alone even once.
Thus, the revolutionary lawyers will not be brought to the court room in their first trial 1 year after they have been arrested. They are imposed to make their defense under and unlawful, arbitrary system called SEGBİS video conferencing system. SEGBİS video conferencing system is improper for defense, because in this way the communication between the prisoner and the court is hindered. The video connection is oftenly broken, the words of prosecutor and the judge are not clearly understood by the prisoner, and the defense of the prisoner is not clearly understood by the court.
These are the technical aspects. But defense by SEGBİS video conferencing system would still be an unlawful imposition even if there were no such issues. Because the place where the defense is made should be the court room. With SEGBİS system, the imprisoned revolutionary lawyers' right to defend themselves is being seized.
For this reasons, we call you to protest Turkish Ministry of Justice by sending mails & faxes. And we call you to the first trial of the imprisoned revolutionary lawyers in İstanbul Bakırköy Courthouse on September 10, in order not to leave them alone. We may not see 15 of them face to face on the court room that day, nor may they see us. But even if they have been separated to prisons in different cities, their and our hearts will beat together as one that day.
Below is the e-mail and fax information:
Ministry of Justice:
Fax no: +90 312 419 33 70
E-mail: info@adalet.gov.tr
P.S. Attached are two photos. One of them is a SEGBİS court-to-prison video link room in Sincan F-Type prison in Ankara.
The other one is a drawing by a revolutionary prisoner. He is showing how irrational the SEGBİS system is, by drawing a prisoner and in a video link room, and the court on the small screen.
With revolutionary greetings,
Anti-Imperialist Front / Turkey

Posted by maoistroad at 2:29 AM