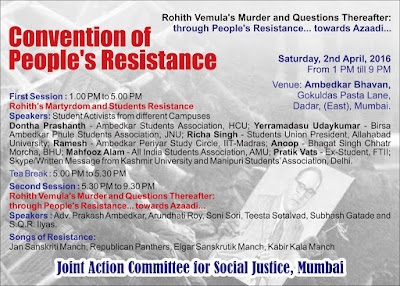 ROHITH VEMULA’S MURDER & QUESTIONS THEREAFTER:
THROUGH PEOPLE’S RESISTANCE…TOWARDS AZADI…
Saturday, 2nd April 2016
1 pm to 9 pm
Ambedkar Bhavan, Gokuldas Pasta Lane, Near Chitra Theater, Dadar (East), Mumbai.
Two months have elapsed since the institutional murder of Rohith Vemula, a Dalit research scholar at University of Hyderabad. Since then the country has witnessed a wave of unprecedented rage demanding justice for Rohith and the punishment of culprits. Instead of democratically responding to the demands for justice, the Brahmanical fascist State, showing its true nature, has taken resource to brutal force and propagation of lies inside and outside the parliament.
This incident is not the first manifestation of the fascist force arising out of Brahmanical and Capitalist nexus. Whenever a question is raised against the alliance of the Hindutva forces with the Capitalists, anyone, individuals or organisations bear similar consequences. Banning of Ambedkar Periyar Study Circle in IIT – Madras, appointment of government puppet as the director of FTII, withdrawal of Non-NET fellowship, killing of Dabholker-Pansare-Kalburgi, harassment of intellectuals and academicians like S.A.R. Gelani, Sandeep Pandey, Vivek Kumar, Saibaba, Arundhati Roy and Dr. Saibal Jana; repressing the militant struggle of Hero Honda- Maruti workers; open attack on Adivasi activist like Soni Sori who have been struggling for their right on Jal, Jangal, Jamin and self-respect are few other known instances of fascist repression. Students and Working class peoples from different places are fighting against casteist-communal-gender-economic discrimination of all kinds imposed by these Brahmanical forces. The momentum built after Rohith’s Martyrdom has given the new directions to these existing struggles.
As to suppress the dissent this fascist state labelled the resistance of Ambedkar Students Association in HCU and Rohith as anti national; they used same label for students of JNU and many others. Some students including Umar Khalid, Anirban, Kanhaiya have been put behind the bars under the charges of sedition which the British used upon those who opposed their exploitative colonial Rule. Today, their native nationalist touts are using the same sedition law to crush the crush the voices of freedom loving folk singers, poets, writers, activists, Dalits, Adivasis, Muslim and now students. But students across universities are challenging the project of so-called Hindu Rashtra through the slogans of Azadi Slogans of freedom from India have reverberated for long in the struggles of North-east and Kashmir and the call for Azad Kashmir has a long history. Even the Adivasis in Dandakaranya have been shouting slogans demanding real azadi. Dalits have been fighting for Azadi against caste system and so called Hindu Rashtra. Women’s movements have been demanding Azadi from the Brahmanical patriarchal system. This very slogan of Azadi is being reiterated by students today and has become part of student movement.
Unless we dig the grave of caste system which prevails here; real freedom cannot be achieved and until then, ideals of equality, fraternity, secularism and justice as mentioned in the preamble of the Indian constitution will be empty and hollow. This caste system is an agent of imperialism. With seventy years of national independence, it is evident that the crucial task of annihilation of caste system cannon be realized with the superficial patches of parliamentary politics. Therefore this task of annihilation of caste will be succeeded only through radical mass movements. Hence the need of the hour calls for a broad alliance by keeping the internal differences aside to annihilate caste.
It is pertinent that we derive our understanding of Azadi from the martyrdom of Rohith and people’s struggle, whose lives have been a struggle for Azadi. And therefore we as Joint Action Committee for Social Justice, Mumbai, are organizing this convention of People’s resistance. let us all come together to fulfil Rohith’s dream and march together as solders in this fight for Equality.
Program Details :
First Session: 1 pm to 5 pm
Rohith’s Martyrdom and Students Resistance
Speakers: Student Activists from Different Campuses
Dontha Prashanth – Ambedkar Students Association, Hyderabad Central University.
Yerramadasu Udaykumar – Birsa Ambedkar Phule Students Association, Jawaharlal Nehru University.
Richa Singh – Students Union President, Allahabad University.
Ramesh – Ambedkar Periyar Study Circle, IIT Madras.
Anoop – Bhagat Singh Chattra Morcha, Banaras Hindu University.
Mahfooz Alam – All India Students Association, Aligarh Muslim University.
Pratik Vats – Ex-Student, Film and Television Institute of Indi, Pune.
Skype/Written Message from Kashmir University.
Written Message from Manipuri Students’s Association, Delhi.
Tea Break : 5 pm to 5.30 pm
Second Session: 5.30 pm to 9 pm
Rohith Vemula’s Murder and Questions Thereafter :Through People’s Resistance…Towards Aazadi..
Speakers:
Adv. Prakash Ambedkar
Arundhati Roy.
Soni Sori
Teesta Setalvad,
Subhash Gatade
SQR Illiyas
Songs of Resistance: Jan Sanskriti Manch, Repulican Panthers, Elgaar Sanskritik Manch
and Kabir Kala Manch.
Saturday, 2nd April 2016
1 pm to 9 pm
Ambedkar Bhavan, Gokuldas Pasta Lane, Near Chitra Theater, Dadar (East), Mumbai.
Joint Action Committee for Social Justice, Mumbai, Maharashtra.