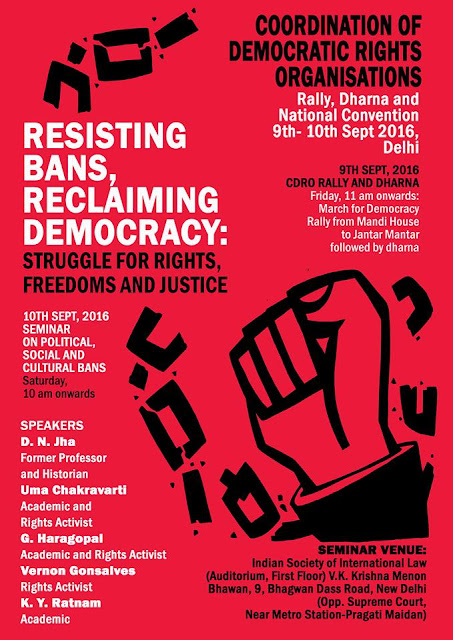 DEMOCRATIC FORCES SHOULD WITHSTAND STATE REPRESSION LIKE A BOULDER RESISTING THE STRONGEST OF GALES.IN THIS DARK HOUR WITH COMMUNAL FASCISM STRENGTHENING IT'S TENTACLES.

TO IT'S HIGHEST LEVEL DEMOCRATIC FORCES SHOULD STRIVE TO BRING RAYS OF LIGHT.

OPPOSE THE UNCONSTITUTIONAL BAN ON ALL DEMOCRATIC ORGANIZATIONS FIGHTING FOR PEOPLE'S RIGHTS AND THE UNJUST ARREST OF THOUSANDS OF POLITICAL PRISONERS LANGUISHING IN JAILS.

EXPOSE STATE TARGETING OF ALL DEMOCRATIC ORGANIZATION SIN THE NAME OF 'EXTREMISM.'

The March for Democracy All India Rally and Dharna

Assemble at Mandi House at 11 am The Coordination of Democratic Rights Organisations (CDRO), a coalition of civil and democratic rights organizations from across India, gives a call for a Rally and Dharna on 9th September, 2016 in Delhi to protest against increasing attacks on people’s rights.

Reclaiming our democratic rights and resisting the culture of banning and curtailment of fundamental freedoms, we demand:

• Stop attacks on freedoms of speech, thought and expression

• Withdraw legal immunity to armed and paramiltary forces, and government officials • Immediate stop to state violence in Kashmir and the North East

• Stop ‘Operation Green Hunt’ and other such offensives

• Stop all forms of social discrimination