Tears well up in Wang Shiji's eyes as he describes the first time he saw Mao Zedong, waving to a crowd of Red Guards in Beijing at the beginning of the Cultural Revolution in 1966 when Mao declared class war.

"It was then I decided to give my life to Chairman Mao," Wang, a former soldier, told Reuters. "I swore to live and die as a Red Guard and that is what I will always be."

For Wang, all of China's current problems, from corruption to a growing rich-poor gap, can be traced to the landmark economic reforms ushered in by Deng Xiaoping in the late 1970s after Mao's death, reforms he terms "revisionism".

"None of these bad effects can be rooted out until this privatization is stopped," he said.

Mao, who died 40 years ago on Friday, has become a potent symbol for leftists within and without the ruling Communist Party who feel three decades of market-based reform have gone too far, creating social inequalities like poverty and graft.

In lauding Mao, they sometimes seek to put pressure on the current leadership and its market-oriented policies.

While Mao is still officially venerated by the ruling Communist Party as the founder of modern China - his face adorns every yuan banknote - some fear the party, in a bid to modernize its image, wants to play down his legacy.

Speculation periodically percolates on far-leftist websites that Mao's tourist-thronged mausoleum in central Beijing's Tiananmen Square will be demolished, or moved elsewhere, though officials have dismissed this.

In January, Mao's supporters were upset when authorities in Henan province dismantled a 36-metre-high gold-colored statue of Mao for failing to be properly registered.

For the Communist Party which brooks no challenge to its rule, such parties are anathema. 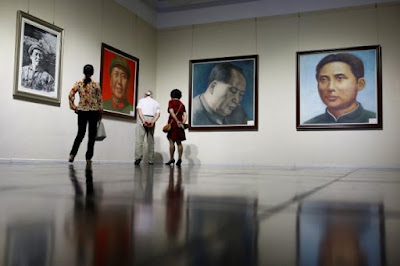 Wang says he believes democracy is something Mao would have wanted. Last week, he told Reuters he would hold the party's first congress, in the gritty northern city of Shijiazhuang, this week, and he expected about 50 people to attend.

In a brief text message on Tuesday, he said the congress had been canceled, without giving a reason. Reuters has not been able to reach him since. Shijiazhuang police declined to comment.

Posted by maoistroad at 7:00 AM