19 May, Hamburg: Freedom for Palestine – Stop the Massacre in Gaza! 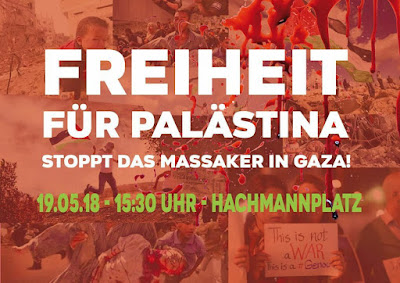 Freedom for Palestine! For an end to the occupation!
In Gaza, tens of thousands of courageous Palestinians demonstrated on March 30, on Land Day, in a mass march. They demand the liberation of Palestine from the Israeli occupation and the right to return of all Palestinian displaced persons. Over 70 percent of the Palestinian population in Gaza are refugees who have been denied the right to return home for 70 years.
The Day of the Land was marked in history in 1976, when Palestinians organized a general strike against Israeli expropriation of land and rights. Their protest was bloodily suppressed by the Israeli occupying forces, six people were killed, more than a hundred were injured and dozens were imprisoned!
Since the anniversary of the Day of the Land in 2018, there have been repeated massacres of the civilian population in the Gaza Strip in recent weeks. Peaceful demonstrators are shot down as they approach the illegitimate border of the Israeli colonial state. This week, countless people died again on Nakba Day because they were participants in a legitimate protest!
60 people dead and hundreds injured, but the German press continues to speak of the defense of Israeli borders. But the Palestinian people are a strong people. They will not stop resisting the occupation and fighting for their freedom.
US imperialism seems to be under even more aggressive support for Israeli foreign policy under Trump, and reactionary regimes such as Saudi Arabia and Turkey under Erdogan support Israel – despite lip service. But this situation will not remain the same. The ongoing attempt to deny Palestinian refugees their rights will be answered with further uprisings and demonstrations. The fight for return continues. As anti-imperialists and internationalists, we stand by the side of the Palestinian people.
Your fight is our fight too! Let us not be silent about our Western governments supporting Israel’s bloody occupation policies. Let’s take to the streets together for the rights of the Palestinians!
Come to the rally on 19.05.18 at 15:30 on the Hachmannplatz at Hamburg Hauptbahnhof!
Posted by maoistroad at 9:47 AM