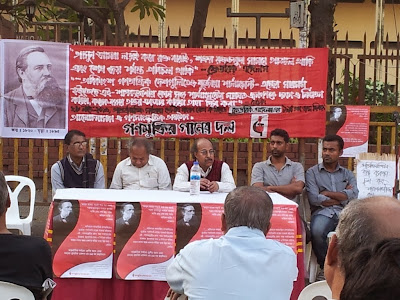 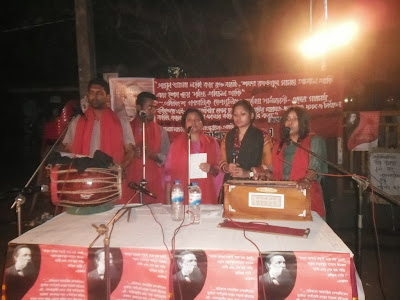 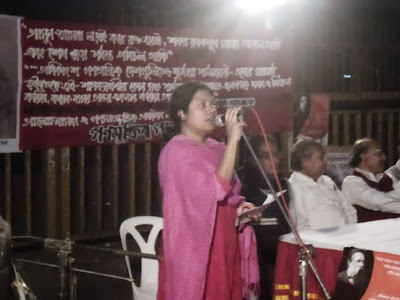 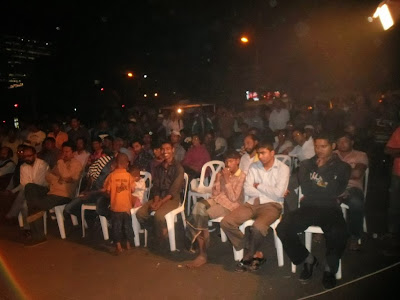 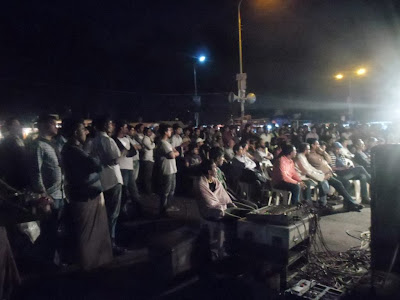 “Let us fight and bleed , stay calm in front of the scaring eyes of the enemy and remain resolute up to the ultimate win.” – Engels.

“……in the most democratic republics too, the real essence of bourgeois parliamentarism is to decide once every few years which members of the ruling class are to repress and crush the people through parliament.”
Lenin.
Comrades
With the slogan above Gonomuktir Ganer Dol has observed  194th  day of birth of the great leader of the international working class comrade Frederick Engels with discussion program and afterwards a mass cultural program on Nov 28, 2013 at 3.30pm in front of the National Museum Gate, Shahbag, Dhaka. Advocate Zahed Karim has presided over the discussion program. Discussants in the program told that every success of this corrupt, peoples’ enemy, exploiter ruling class will bring inevitable sufferings for the general people. The current election campaign is  to ensure that suffering. The only viable call in this circumstances from the platform of the general people is a call to Boycott this election.  But the boycott only can solve nothing. We need to have counter-program from the people,purpose of which will be to establish a free democratic society for the people, what we call “peoples’ democracy” or “new democracy”. The slogan to boycott election does not bear meaning if not followed by revolutionary movement to establish a new democracy, in the same way it is not possible to join in the peoples’ democratic movement if we do not boycott election. And here is the clean difference between the grounds why  a fraction of the reactionaries boycott election and why people boycott election. Election of bourgeois parliament cannot bring freedom for the peasant-labor-working class. In fact bourgeois parliament is a club that preserve the interest of imperialism and expansionism. The only way for the peasant-labor-working class to be free is an armed class struggle that besiege the cities from the villages around and crush this reactionary state to establish a peoples’ democracy. The only of freedom for the people lay on the path shown by comrade Charu Majumder based on the ideology of Marxism-Leninism-Maoism.
Discussants present were Ashish Corraya, Gen. Scretary, Gonomuktir Ganer Dol; Professor M. Nurrunnobi, President, Gonoshangskritik Porishod, Hasibur Rahman, Gen. Secy, Lekhok Shibir, Comrade Jafor Hossain, President, Noyagonotantrik Gonomorcha, and Comrade Prince Ahammad, editor, Lamppost. Cultural organizations participated were Muktir Moncho, and Gonomuktir Ganer Dol.
Red Salute
Ashish Corraya
General Secretary
Gonomuktir Ganer Dol

Posted by maoistroad at 9:52 PM