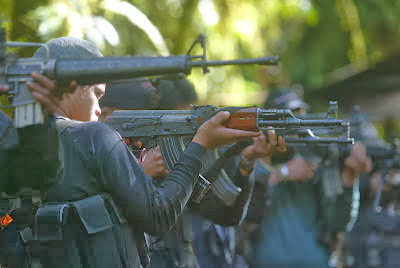 
Red fighters belonging to the New People’s Army Mt. Apo Subregional Command raided the municipal headquarters of the Philippine National Police (PNP) in Kibawe town, Bukidnon province at 4:50 am, 12 December. The tactical offensive lasted for a total of 17 minutes, resulting in the NPA’s seizure of thirteen (13) firearms: seven M-16 Armalite rifles, three .45 caliber pistols, three 9mm pistols, several ammunitions, uniforms and a VHF radio.
Five PNP forces on duty opened fire at the approaching NPA guerrillas who came in aboard six four-wheeled vehicles. The ensuing 10-minute battle killed two PNP forces and wounded three other police elements. The Red fighters then proceeded to confiscate the firearms for seven minutes, before withdrawing from the police station.
Enemy casualties would have not occurred had the police opted to leave the NPA untouched when the latter conducted the raid and disarming of the PNP municipal headquarters.
An undetermined number of reinforcement troops belonging to the PNP Regional Mobile Group and the 8th Infantry Battalion of the Philippine Army were also hit by the NPA’s command-detonated explosives an hour after Red fighters withdrew from the Kibawe police station. The area was immediately cordoned by the enemy.
Thursday’s tactical offensive not only aimed to secure the much-needed firearms that would enable the NPA subregional command  to develop more fighting platoons. The NPA raid in Bukidnon was also meant to punish an abusive police unit and an army unit responsible for the forced recruitment of paramilitary Cafgus and building of Army detachments in several parts of Bukidnon. The masses have successfully struggled against Cafgu conscription in guerrilla base areas and guerrilla zones, as the Army’s Special Operations Teams conduct abusive operations in the province.
As the US-Aquino regime suffers from political isolation and incur the people’s wrath due to corruption, inutility and failure to solve the worsening economic crisis, the revolutionary movement continues to take the political-military initiative in advancing the revolutionary struggle to a higher stage while persevering to build and strengthen the People’s Democratic Government.