Canada - _ On the “World” Social Forum 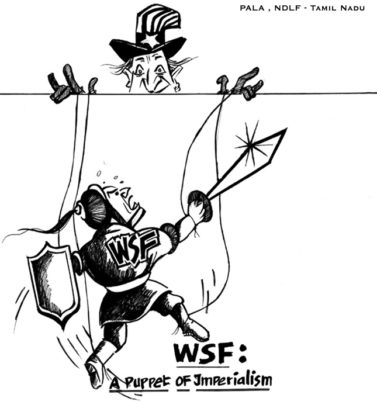 On the eve of the opening of the “World” Social Forum to be held from August 9 to 14 in Montréal, we invite you to read and share the articles published in this special issue from the Aspects of India’s Economy journal. They were published in September 2003, a few months before the holding of the 4th edition of the WSF that happened in Mumbai. They present a sharp critique of the limitations of the WSF and the impasse in which it was—and still is—located, for refusing to support a global, militant and consequent opposition to the world imperialist system. The PCR-RCP has never participated in various social forums that took place in Canada or elsewhere and is not taking part in the 2016 edition. By doing so, we endorse the call for boycotting the WSF recently issued by the comrades of the Revolutionary Democratic Front of India.

Posted by maoistroad at 9:00 AM