The Nato's Summit - Imperialism and war - 3 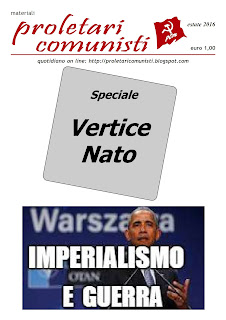 Afghanistan
Afghanistan has been another major topic at the NATO summit. During the whole summit, US has revived and then imposed the continuation of the war of aggression, invasion and military occupation in Afghanistan.
The shameless liar, fake pacifist, Obama, had already denied in recent months the decision to end the mission at the end of 2015, in any case within the term of his office, but at the summit the military occupation of Afghanistan has been protracted until 2020, a purely indicative date.
NATO is fully aligned with him and the Deputy Secretary-General for NATO operations, Patrick Turner, confirmed that the “Resolute Support Mission” aims to train the Afghan armed forces with the funding and direction of NATO until 2020.

It is the clear admission that the invasion and occupation of Afghanistan has not been successful and the puppet regime and its armed forces, in spite of the endless military and financial support, in spite of the farcical elections, do not have a basis in the country and would fall in half a day without the imperialist occupation.

In the Mission in Afghanistan a special and even more war-mongering role is played by Italy, guaranteed by the Renzi government of and the Italian military hierarchies, branches of US and NATO - but we speak of this in a separate article.
The essence is an increase of US troops and, as stated by a press release of the White House: “39 countries, including NATO and other allies are committed to a participation of 11 thousand soldiers ... 4 allies have a leading role, Germany in the North, Italy in the West, Turkey in the capital, US in the East and South of Afghanistan.”
IE, on the one hand Obama raised the American presence, on the other hand. he got a bigger financial and military effort of the whole NATO and some countries in particular.

The NATO Secretary, Stoltenberg, spoke about funding for the Mission in Afghanistan of about 5 billion dollars until 2020. An open-ended effort, but also without a future. Even the Sole 24 Ore comments: “The American presence in Afghanistan drags on without a clear strategic view. Any exit strategy has proved to be a disaster. Nor we understand how they could not stabilize Afghanistan when having 125 thousand troops, while the new Mission relies on a little more than 13 thousands.”

The truth they do not recognize is that imperialism, its aggressions, invasions, with all the burden of terror, massacres of civilians, barbarities as Abu Ghraib, Guantanamo etc., is within a losing spiral. The peoples are those who resist and attack, even when their leadership is not represented by communist, proletarian, revolutionary, genuine anti-imperialist forces. If this condition was realized, the US imperialists and the mercenary soldiers of the allied imperialist troops, including Italians, would be massacred and expelled, we would have had another Vietnam.
That is why all anti-imperialist and progressive individuals can only rejoice for any stalemate that imperialist troops suffer and support the people’s resistance and, in particular, the forces that in Afghanistan follow the strategy of the resistance people’s war.

The decisions of the NATO Summit on Afghanistan are not a demonstration of the strength of imperialism or of a particular malice, but only of a desperate weakness. 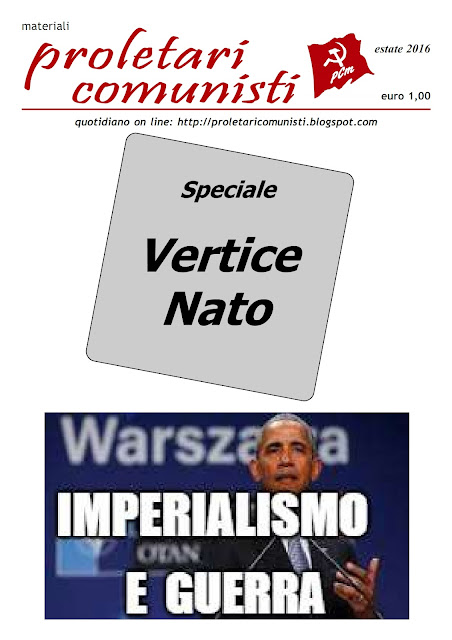 Syria, Middle East ...
The NATO Summit could not omit to deal with another major war scenario, the arc from Syria, Middle East, North Africa.
However, the US-led imperialist aggression against the peoples of the Middle East under the pretext of ISIS was not the focus of this Summit. On this prevailed a tired continuity, the lack of way out and, to a certain extent, the need to maintain the collusion with Russian imperialism and its agents in this region.
The imperialist and NATO offensive is in full swing with bombings and operations on the ground resulting in huge civilian casualties.
The South front of the NATO action, goes through a period of confusion. The goals of US imperialist, Syria first, are clear but the action on the ground has become a shocking twine of treacherous allies, forces which operate on the field each with its own interest and make inextricable any solution, with the only result of endless massacres of populations, that at the same time force a massive wave of migration, along with the "homecoming" of the war, undesired by imperialists.

The important issue at this stage is the fact that while in the development of the imperialist action in the Eastern Europe or Afghanistan US imperialism dominates and rules, things get complicated within NATO itself when it comes to Syria or Iraq. the NATO allies feel their full involvement in the operations in Syria and Iraq be a strategic error and fear more and more the "homecoming" of war. But the spiral they triggered cannot be stopped.
All the imperialist countries, and then the NATO itself, every day make a step ahead, but in most of cases it is done motu proprio and with disordered forms, in a context of unstable alliances, in which the role of Turkey, Iran and Saudi Arabia is increasingly influential.
Indeed, these countries tend, time to time, to establish relationships of cooperation or conflict, not only between themselves but also with Russian imperialism, the forces supporting it, its direct military action.
In all this, US imperialism, in spite of its hegemony and direct intervention, is discredited in terms of the actual ability to play a global leadership. The main contradiction is that on the one hand the ISIS is declared the main common enemy, on the other hand, the US and some of its allies first want to overthrow the Assad regime. To say Assad regime means to say Russia, Iran, Hezbollah and Hamas.
So NATO fails to find on this a common understanding that goes beyond words.

Therefore, the imperialist aggression in Syria and the fight against the ISIS are a weak link of the alleged revival of NATO as global place of the imperialist bloc.
Nor the situation changes a lot if we extend the scene to Libya, where US imperialism is pursuing the direct domain of regimes and occupation of lands, also with military bases, which is not only at the expense of the peoples of the entire region, but feeds also the inter-imperialist conflict with other imperialist countries having the same goal.
On the other hand, the war in Libya, with the fall of Gaddafi, far from stabilizing the imperialist position, has fully proved to have undermined it and pushed Libya in a war of repartition, where the NATO, despite the decisions of intervention, moves according to a subordinate and subsidiary logic, to the direct moves carried out by the imperialist states, each of which has its own secret or official troops on the ground in support to the different factions in contention, not only in Libya but also in the increasingly important Tunisia; and Morocco and Algeria also will be soon part of the conflict.