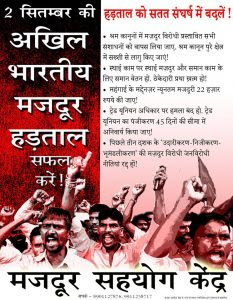 Strike campaign and programs in Gurgaon-Manesar-Dharuhera-Bawal-Bhiwadi-Neemrana industrial belt:
Let us make 2 September All India Workers Strike a success!
Let us transform the strike from a ‘yearly ritual’ to a momentum for co-ordinated militant bottom-up collective action of workers and uncompromising relentless struggle against anti worker neoliberal design!
Modi government is in the process of implementation of a series of anti-worker reforms in the labour law to rob the workers of their rights to form unions, to strike, to have a dignified and secured job, to get wage that can afford critical minimum level of life standard and so on. It is a part of the class war that Modi is executing for the big capitalists. The working masses, in response, will retreat further to despair with some sporadic expressions of anger here and there, or, will fight back with renewed militancy and collective actions, disturbing the pro-coporate ambitions like ‘Make in India’ and the neoliberal design itself.
In this context, after a long period of inaction, last year the Central Trade Unions declared a nation-wide strike on 2 September. The strike became quite successful at the grassroots and saw the initiatives of rank-and-file workers. According to some statistical sources, almost 15 crore workers participated in that strike, which is few times the membership of all trade unions put together. That shows the discontent of the working masses and their eagerness for collective action. Then again after a year of inaction, the Central Trade Unions have declared another All India strike on 2 September this year. Though we are doubtful of their ability and desirability to lead/support a militant fightback of the workers, the event still opens up the possibility of a hightened level of activity of the workers, particularly in those sectors and industrial areas where the workers have shown spontaneity of struggle in recent past.
The workers, particularly of automobile and garment sector in Gurgaon-Manesar-Dharuhera-Bawal-Neemrana-Bhiwadi industrial belt, where we work now, have repeatedly shown militant assertions against the offensive of the capitalists. In the context the joint strike call, we, on behalf of Workers Solidarity Centre (Gurgaon-Bawal), similar to a campaign last year, have started a campaign among the workers in these belts this year too. The struggling permanent, contract and dismissed workers of different plants like Maruti Suzuki (Manesar and Gurgaon plant), Hero MotoCorp, Baxter, Autofit, Nerolac, Asti, Rico, NSK, Daikin etc is taking initiatives in the campaign.
As part of the strike campaign, we are starting with 3000 posters and 25000 pamphlets to distribute at company gates and in workers residential areas and meeting unions across affiliations to explore the possibility of different forms co-ordinated actions. Along with this campaign, a street play named ‘Sultan’ of 20 minutes to depict the life-world and struggle of a contract worker of Haryana named Sultan is being performed in different parts of these industrial belt. The play has been enacted by workers themselves, who have formed an initiative named ‘Pol Khol natak dal’.
Some important markers of this campaign are —
A workers convention on the context of All India strike and the challenges and possibilities for workers struggle, keeping in mind the issues of anti-worker reforms in labour law, minimum wage, contract system, migrant labour etc, followed by the play ‘Sultan’ by ‘Pol Khol Natak Dal’
Date : 31 August, 2016
Place : Maa Santosh Devi Dharmshala, Sohna road, Dharuhera (near Dharuhera bus-stand)
Time : 3 pm-6pm
Workers meetings and the street play ‘Sultan’
Date : 24 August, 2016
Place: SPM Park, IMT Manesar
Time: 3 pm
Date : 25 August, 2016
Place: Behror Industrial belt, Alwar, Rajasthan
Time: 11 am
Date : 25 August, 2016
Place: Neemrana Industrial belt, Rajasthan
Time: 4 pm
Date : 30 August, 2016
Place: Udyog Vihar, Gurgaon
Time: 5 pm
Also, Workers Solidarity Centre, as a constituent of ‘Mazdoor Adhikar Sangharsh Abhiyan’, an initiative to form an All India co-ordination of campaign/struggles of genuinely struggling unions and workers organizations across the country, will have a sustained campaign in this period among the workers for an
All India Workers Convention on 28 August 2016, 10am to 5pm, at Ambedkar Bhavan, Jhandewalan, New Delhi
We invite you to participate in the campaign and the programs according to your convenient dates.
Workers unity and struggle long live!
Posted by maoistroad at 5:08 AM