The Nato's Summit - Imperialism and war - 5 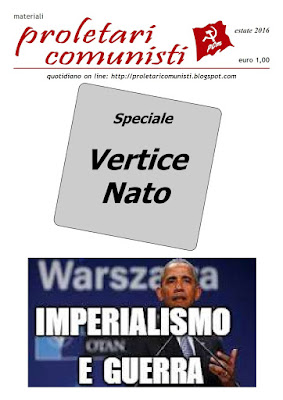 Italian Imperialism at the NATO Summit
Italy was represented by Renzi and his unpresentable ministers, Gentiloni and Pinotti. At certain degree they reflected almost physically the actual weight of Italy on NATO: fleas on elephant backs, characters who pretend to have influence while their only prospect is to be aligned and serve the general interests of imperialism, first and foremost the US, playing their role as junior partner of the EU.
But the situation in the world and in the sensitive regions for NATO leads also supporting actors to be assigned an important role, certainly not for their abilities or influence but because their position in the world contest and their location in the hottest scenarios in the world.
So, they are fleas but somehow indispensable, servants, yes, but necessary for a good performance and the efficiency of the 'common home'.

Reviewing the decisions of the NATO Summit, we see that the Italian imperialism, through Renzi and his Ministers, have adopted very binding and, to some extent, strategic decisions for our country and, which mortgage the present and the future of our country in military and strategic terms.
No need to say that no one has given consent to such decisions, not the parliament, that has been reduced to a sounding board of the government decisions and the plots of its ministers and parties or the depressing show of the 5 stars PMs, pathetic neophytes of the bourgeois democracy, who scream, expose, but on the major economic, political and strategic interests of imperialism do not count at all nor they will count if they go to the government.
Of course, it can be said: “Not in our name”, a slogan of the pacifist movement in the world and in Italy. But it is a slogan that does not save the soul. Unfortunately, the alternative to the imperialist wars and the increasing involvement in it of Italian imperialism is not peace, because without justice there is no peace, and without overthrowing by arms the governments of the armies and war, no aspiration to peace is achievable.
Has the experience in all these years, from 2001 G8 on, taught us something? How many decisions of Italian imperialism have not been implemented thanks the opposition of the pacifist movement, even when it was able to involve several tens of thousands people? Almost no one. What now, “When the going gets tough”? “When the going gets tough, the tough get going” has never been a reality for the opposition movement to the imperialist war in Italy. But now, “the tough must get going” if we really want that the decisions of Italian imperialism at NATO Summit will not only be said “not in our name” but seriously opposed.

We just list some facts.
Italy contributes with 150 soldiers to the rotation assault troops deployed by NATO in Poland, Lithuania, Latvia and Estonia.
Italy is part of the so-called "quintet", along with US, Germany, France and Britain, now including the pro Nazi Ukraine, to put pressure on Russia (in fact, Renzi and especially the Italian bourgeoisie are not so happy of the “no business as usual” with Moscow declared by Obama. It costs a lot. As Dinucci writes: “the abandonment of the South stream gas pipeline Russia-Italy and sanctions on Russia have already made Italy lose billions of euro”.
Italy actively participates in the so-called “war on terrorism” against ISIS with planes and troops in Iraq and Syria, and the “Sea Guardian Mission” in the Mediterranean, that in turn is linked to the Operation “Sophia” of the EU to deal with ‘immigration and terrorism’.
Finally, Italy took up the role of ‘leading country’ (?) along with Germany and Turkey, in the extension of the mission in Afghanistan, with thousand soldier deployed between Herat and Kabul.
Once Renzi said yes to all that, he can also say “Italy is no longer a sick to care for, but an important point of reference.”

However, as regards the new mission in the Libyan sea, Italy is really important, crucial for the mission itself. The drones “Global Hawks” of NATO, produced by Northrop Grumman, are deployed in the base in Sigonella, Sicily, and will take off on 2017.
The Ministry of Defence, led by the maid of the military and the defense industry, Pinotti, insists that the military drones should be armed and that the weapons must be produced in Italy. But Italy can only buy and implement the US technology.

As for Afghanistan, the Italian military are happy. Camporini, former chief of staff, said: “Italy has seen confirmed a leadership role that has been able to achieve with his work on the ground, both in terms of military actions and assistance.”
All these “paper” leadership and medals claimed by Italy serve to justify a new dramatic growth of the military expenditure. At the NATO summit Obama has made clear that: we make plans and decisions but you will give men and the money, since we have already given.
Dinucci, on il Manifesto, wrote: “The official figures published by NATO during the summit reported that military expenditure of Italy was 17 billion and 642 million euro in 2015 and that it is estimated at 19 billion 980 million euro in 2016, i.e. increased by 2.3 billion. Taking into account the extra-budget military spending for International missions, warships, etc, the overall expenditure is actually much higher. According to the NATO stats only, Italy spends an average of 55 million euro per day in 2016.”

The NATO summit has confirmed the ongoing mission at the Mosul dam, Iraq, that is passed as an operation of supervision / protection, when it is a support on the ground to the massive bombings of US and its coalition. But Italy does even more. As minister Pinotti pointed out, 3,000 Iraqi policemen have been trained by about 90 Italian Carabinieri from June 2015. Obviously, they will be used in the military operations to recover the control in the areas occupied by ISIS.

About other missions abroad, it is good to note that what we had said about the parliament and the military actions camouflaged as peace missions, did find a confirmation in recent days. The law on peacekeeping missions has been adopted by parliament with only one ‘NO’ (we do not know by whom); ‘Yes’ were 284, by  government, Forza Italia, Fratelli d’Italia etc.; 94 abstentions, by 5 Stelle, Sinistra Italiana and Lega Nord. It meant Yes to the missions, Yes to the expenditure for the missions and Yes to the an automatic mechanism for their approval.
Add to this another very serious fact, that is the use of the Military Penal Code for these missions. It means green light to war atrocities by our soldiers, with a substantial impunity.
There was also a measure ad hoc for the Italian marines detained in India, that establishes that if a soldier kills civilians and for his misfortune is captured or dispersed, the bonuses and money due while he was operating are still up to him.
There are other norms that would merit discussion, later.
Italy is still a giant military platform for the global action of NATO-US, and this aspect has been strengthened by the decisions of the NATO Summit. It is not a coincidence that the Chief of Staff of the Joint Force Command in Naples is an Italian. And it is this command that plans the support by NATO to countries, i.e. governments, such as Egypt, Tunisia and Jordan.
This review of the Italian commitments could continue, based on further details contained in the final document of the Warsaw Summit. But it is good to wait for the results of the action of imperialism.

What we cannot postpone is the construction of a broad anti-NATO and anti-imperialist front, centered on the struggle against Italian imperialism, which will connect all the active movements, such as No Muos, and what remains of the opposition to the US bases of Dal Molin or Camp Darby.
More than pompous declarations Renzi or the propaganda spread by the maid of generals Pinotti, an acrimonious general, Marco Bertolini, until very recently Chief of Staff for the missions abroad, helps us understand the renewed importance of these battles.
Interviewed by La Stampa, he openly said: “Get ready for war. Do not deceive yourself, the truth is not that of the talk shows, the history has set in motion again. Someone thinks that our armed forces are a useless tool, but we need to invest more if we want to govern a difficult and dramatic future.” Speaking about what occurs in the theaters where Italian soldiers operate, from Afghanistan to Iraq, the Balkans, the Mediterranean Sea, he concludes: “In Italy we persist to believe that we live in the best of all possible worlds. It is not so.”
According to La Stampa, a crowd of generals, admirals, colonels applauded wildly his declarations.
Bertolini reminds his men, but should to remind us too, that imperialism is war, that Italian imperialism is in war in the various theaters and prepares the Italian participation in the broader war outlined by NATO Summit in Warsaw.