Vikalpa, edited by Rishi Raj Baral, is the publication of ‘Revolutionary Intellectuals and Cultural Front’, Nepal. It is published  in Nepali vernacular.  Now we have 2nd issue of Vikalp. This issue has included more political articles concerning the world Communist Movement. It is a special issue named as— Paris Commune to Present. It includes the article by Marx-Angles on  the Paris Commune. Concerning the Paris Commune, we have another article from Peking Review-‘Long Live the Dictatorship of the Proletariat’.  This year oppressed people of the world are celebrating 50 years of the ‘Great Proletarian Cultural Revolution in China’. We have included some articles concerning the the ‘Great Proletarian Cultural Revolution’, including the article of Hongsheng Jiang. We have taken this from ”Paris Commune in Shanghai: the Masses, the State, and Dynamics of ‘Continuous Revolution'”. 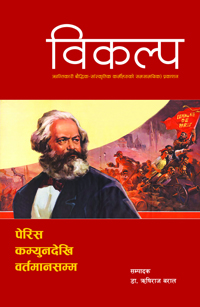 Naxalbadi is not only the name of a village. It was a revolutionary movement of a Great significance. In India, the great Naxalbari peasant revolutionary armed uprising – which is going to complete its fiftieth anniversary – was influenced and inspired by the GPCR. As Com. Ganapathy has mentioned : ”Naxalbari was a path-breaking event under the leadership of comrade Charu Majumdar – one of the two great leaders, teachers and fore-founders of CPI(Maoist) comrades CM and KC – which marked a new beginning in the history of the country’s democratic revolution.” Here we have included the article  published in People’s Daily– ‘Spring Thunder Over India’ and an article by Com. Charu Mazumdar–’The Indian People’s Democratic Revolution’. We have published some chapters from ‘Against Avakiyanism’ by Com. Ajith, who is now imprisoned in the Indian jail. We have included an article by Rishi Raj Baral- ‘The essence of ‘identity politics’ and the Nepalese Maoist Movement. This article explains, how the politics of class struggle is suffering with a big setback in Nepal, and the Nepalese Maoists have been trapped in the cage of ‘identity politics’.
It includes some literary articles also by Chaitanya (literary name of Com. Kiran), Ngugi wa Thiong’o, Eduardo Galeano, Khem Thapaliya and others. Thapaliya has explained : how the university professors, who present themselves as the Maoist critic, are deviated from the revolutionary concept of Marxist literary criticism. This issue also includes the literary interview of Mahasweta Devi, the imminent progressive writer of India, who is known as the writer of Naxalbadi struggle. Now she is passed away.
In editorial, Rishi Raj Baral has mentioned that not only the neo-reactionary group like Prachanda and his allies, others groups also are not grasping MLM with revolutionary dedication.  He has urged to stand firmly on the side of MLM and to move ahead towards the New Democratic Revolution. It is a matter of surprise that even the faction led by Netra Bikram Chand,’Biplav’ also has discarded the revolutionary history of Paris Commune to Mao. Instead of New Democratic Revolution, Biplav faction is pleading the theory of ‘unified revolution’, and recently, in an article published in ‘Janakranti’,  the mouth organ of Biplv faction, Biplav has pleaded the concept of post-imperialism.
But with Great enthusiasm and conviction we announce:
The Principles of the Paris Commune are eternal!
Long live Marxism-Leninism-Maoism!
Let us celebrate the 50 years of GPCR !
Let us support the People’s War in India.
Posted by maoistroad at 9:20 AM