Hamburg, 24th of November: everybody to the International Conference in Support of People's War in India 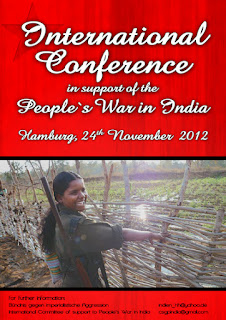 Support the People’s War in India!

The bosses of world imperialist system carry out an offensive against the peoples of the world. Imperialist wars of aggression as those against Iraq, Afghanistan and Libya, mark the beginning of the century. They prepare the next war against Syria, Iran or any other, because one thing is certain, that they are not going to stop voluntarily. At the same time, they impose on people the consequences of the crisis, especially on the peoples in the oppressed nations, but also in the imperialist countries themselves, the working class is constantly trampled and their fundamental rights are quickly stolen away. In this situation, fascism is not a nebulous threat, but an active force. At the same time, the imperialists systematically destroy the planet. All this is well known. This shows that imperialism is reaction all along the line, it shows that imperialism is not consistent with the progress of humanity and, indeed, the survival of an ever larger part of the world population. “The end of history” that the imperialists announced loudly since the nineties, is a hell for the proletariat and peoples of the world. But, more oppression spurs more resistance, and so, from Peru to the Philippines, from the British Islands to China, from Colombia to Kurdistan, from Nigeria to Greece, all around the world, the countries want independence, the nations liberation, and the peoples revolution. This is the basis for a current that will bury imperialism. The problem is, in many cases, that the struggle against imperialism is limited only to the resistance with no prospect but the mere survival. Therefore, in order to develop this resistance as a powerful wave of anti-imperialist and revolutionary struggles, the conscious organized factor is required to be able to lead the consequent struggle to establish the people’s Power. Hence, it is worth the effort to take a look on India.

India, which the ruling classes cynically present as the “Shining India” and a supposed example of that imperialism brings “development”, is a heaven for the rich and hell for the people. While the wealth of the 53 richest people in the country is equal to 31% of GDP, the 77% of the population live with an income of less than 20 rupees (approximately 50 Euro cents) a day. Every day 5,000 children die from starvation and malnutrition, that is almost two million child deaths per year. The percentage of hungry people is greater than in Ethiopia. The agrarian crisis, a direct result of the imperialist policy, causes immense misery to the peasantry and results in a wave of suicides, with hundreds of thousands of desperate peasants who have committed suicide. “The greatest democracy in the world”, is a country in which the big bourgeoisie and landlords do what they please. A country where the caste system is still fully intact. Where different minorities, different nationalities and peoples are forced to live in a “prison-house of nations”. In order to increase the imperialist exploitation, they established Special Economic Zones, where the so-called “transnational” companies can operate without limits. Tens of millions of people are forced to become internal refugees, because they are expelled from the land where their ancestors have since thousands of years, so that Capital can steal the raw materials existing there. We could mention many other examples, this might fill all a book, the question is clear: the anti-imperialistic and anti-feudal revolution is a necessity for the vast majority of the people of India.

This revolution is ongoing. Under the leadership of the Communist Party of India (Maoist) a people’s war develops - described by the most important representatives of the ruling classes as the greatest danger for their system. In the countryside there are thousands of organizations of the genuine people’s power. In the Revolutionary People's Committees, those who for centuries have had nothing have started to construct their own state. They organize with their own forces a society where there is no hunger, where there is education and health, and the land belongs to who tills it. There are no landlords or lackeys of the imperialists. There, the needs of the people are law. There, they live the true democracy, the new democracy of the people. In the cities, the mass organizations are advancing by leaps, in February this year the working class of India has carried out the biggest strike in history of humanity, involving 100 million people, and the ruling classes are terrified by the growing influence of the Maoists. The People's War stirs the deepest foundations of society.

The ruling classes and their imperialist bosses - how could it be otherwise? - are not sitting quiet with folded arms watching the advance of the revolutionary movement. They act as always and everywhere have done; they seek to drown in blood the struggle of the people. “Specialists” in counterinsurgency from U.S. and Israeli Mossad are there to assist on the field the repressive forces. Paramilitary State forces are fighting daily against the guerrillas - the so-called paramilitaries are militarily organized and armed. The Army and Air Force every time more openly takes part in the fighting. The reactionary state has launched barbaric reactionary campaigns such as: Salwa Judum, "Green Hunt", among others, and implemented a policy that is comparable to the Nazi campaign against anti-fascist resistance in World War II. They apply systematic murder, torture and “disappearances” against the revolutionary leaders.

But the people do not summit. The people’s war advances without stopping, with the clear course in direction of seizing Power. This is possible, since the conscious and organized factor, which we have spoken about above, exists and is able to consistently lead the fight to the end. Their struggle is just and it is an internationalist duty to give them our full and unwavering support. The People's War in India has to merge with the struggle of peoples around the world and be a part of the great revolutionary current that will ultimately defeat imperialism. The development of a consistent anti-imperialist movement in a country of 1.2 billion people will change the balance of forces between imperialism and the oppressed nations, and therefore it would be a great boost for the revolutionary forces around the world. To support this movement does not mean only to fulfill an obligation, but to serve the advancement of our movement in all countries.

It is in this sense that we organize an international conference on 24 November this year in Hamburg. We hope that this conference will be a major boost to the international movement of support to the People's War in India. Delegations from different countries will participate in it and through this they will bring their experiences and ideas on how to raise this campaign to a higher level. We want a conference that expresses the initiative, the energy and the anti-imperialist and revolutionary will of proletarians, women, youth, immigrants, progressive artists and intellectuals. We do not want it to be only a formal act, but a living expression of proletarian internationalism, so that it may serve to give concrete progresses to the campaign of support. The conference is open to all forces who share this objective. Therefore:

Everybody to the International Conference in Support of the War in India!

International Committee of support of People's War in India
csgpondia@gmail.com
Posted by maoistroad at 1:30 AM