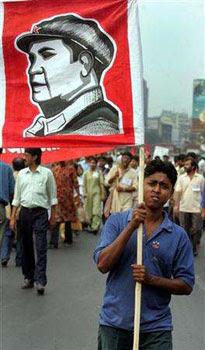 at Maruti Suzuki’s Manesar factory on Wednesday that had resulted in the killing of a senior manager and injuries,
many severe, to 100 others.
A senior police officer said, “So far, 97 workers have been arrested. Investigations are on. We are trying to trace the other
members of the workers’ union.”
Posted by maoistroad at 1:00 AM