Call for the International Women’s Day: “A bridge to women in India” 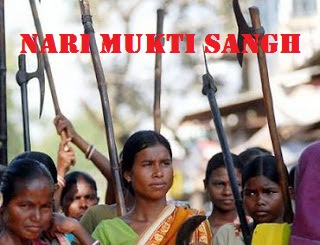 Call for the International Women’s Day: “A bridge to women in India”

This decision is the result, on the one hand, of the proposal put forward in the Hamburg Conference by the women comrades of the PCm Italy, the Revolutionary Proletarian Feminist Movement, to build a "bridge" to the world of women's struggles, looking at the currently most advanced and richest experiences, those of the women fighters of the CPI(M) in the People's War, and, secondly, it responds to the great attention that there has been all over the world on the rapes and the following huge demonstrations of women in India - that the Indian regime claimed have been organized by Maoists, thus confirming itself the strength of the people's war.
That "bridge", the exposure of the low-intensity war against women, in Italy as in India and around the world, made of rapes and murders, of which the comrades of RPFM had spoken in Hamburg, few days after the Conference appeared almost a premonition.

Therefore, the next 8th of March, surely initiatives will take place in Italy, Brazil, France, etc.. We call all the communist and revolutionary women and forces of the International Committee to realize actions in all countries in that day - with women demonstrations in front of Indian Embassies, Consulates, and more.
The larger will be the number of initiatives realized in that day, the stronger will be the echo in many other countries of the battle to unleash the fury of women as a powerful force for the revolution against the capitalist social system, of which the oppression of women is one of the basic pillar, in order to assert in the international communist movement the centrality at the strategic, ideological and political levels for making revolution of the issues and role of women.
Then the “bridge” will not be only virtual but will begin to become real!

P.S.
Please inform us about your joining and the mobilization that will be realized, and send your papers.
Any information or material we receive will be circulated among the forces of the International Committee and all those who want to join the internationalist initiative for the International Women's Day.


(attached the speech by RPFM to the Conference in Hamburg)

As women comrades of the Revolutionary Proletarian Feminist Movement, we salute with joy this conference in support of People's War in India and bring also the warm greetings of women workers, precarious, unemployed, young people that struggle in the Italian cities where we are present.
At the international level, we dedicated the 8 March of this year to the thousands Indian women protagonists in the revolutionary struggle against class, gender, feudal, caste, and religious oppression... women who are the heart of the people's war that advances against a government and a state that calls itself "the largest democracy in the world."
This kind of democracy is made of oppression, even in a capitalist and imperialist country like ours, Italy, that the bourgeoisie in power considered "civil". But the state, the technical/dictatorial Monti government, backed by the Catholic Church, show every day their total incivility declaring war to the proletarian and popular masses and doubly to us women, making violence in all ways, both in the conditions of work and of life and want to take us back to what we call "modern Middle Ages."
State, government and masters are conducting a general worsening downloading on us the cuts of social services, from education to healthcare, increasing cost of living, re-chasing us at home, attacking rights won through years of struggle, like maternity, freedom of abortion, and turning us into “social absorber” (safety nets) in the flesh, in an increasingly subordinate role in the family.
In response to all this we said: "We won't pay the crisis, united we'll break the double chains”!
The more a condition of return-back grows, the more it feeds and spreads a reactionary, chauvinistic, sexist, modern fascist climate/humus that creates the best ground on which grows and increases sexual violence against women up to the killings. In Italy only in 2012, more than 100 women have been killed and most of the killings took place in the family by husbands, boyfriends, fathers, etc, a real war report, a low-intensity war against women. It 'a kind of systemic preventive violence, which feeds on "hate" towards women, as they can think, choose, rebel, fight.
Sexual violence and killings of women have merely continued discrimination and the double exploitation that today goes more and more forward on the ground of the general living and work conditions of women. Hence, it is not this bourgeois state that can defend us women, that can prevent sexual violence. This bourgeois state is the cause, not the solution!
We work to make the fight against the killings and violence against women an important lever to unleash the revolutionary fury of women against this capitalist society, which makes of the oppression of women one of his props/base, so to overthrow it. In this process an important step is our proposal/call to build a women's strike, a class and gender strike for the job and the wages, against the attacks on women's rights, discriminations, double oppression, against the killings and sexual abuses of women; a strike that expresses with force our rebellion, a novelty, an unexpected rupture against masters, the government, the state, and the bourgeois and male chauvinist social system. We are working so to build such a first strike on the 8th March 2013.
Tomorrow is November 25th, the international day against violence on women, and the fact that this conference takes place right at the back of this day of struggle is for us a hope that through it we create a kind of bridge: we want to bring from here, as comrades of RPFM, generated organization of Pcm Italy, to all the Indian women who are engaged in the people's war, our solidarity and support. This means both to acquaint the popular and proletarian women masses in our country the war of the Indian people and the direct protagonism in it of the many women comrades and thousands Indian women, and, on the other side, find the strength and the example to let progress also in our country the revolutionary process in which women will be protagonists, especially the proletarian women.
In these initiatives of struggle we have appealed to women, who are mobilizing in Italy around this day of November 25, to send their greetings and solidarity to the Indian women who are fighting in the nowadays biggest and incisive people's war that gives a liberating response also to the condition of severe sexual violence and oppression that women in India - and in the world - suffer in a so fierce manner. In India many rapes are rapes of war, perpetrated by the military and paramilitary forces to suppress and annihilate the anger and the strength of women. But for many women the suffered violence and rapes have become a lever to rebel and join the peolple's war, becoming fighters in the "front line" of the Maoist Communist Party in the revolutionary struggle for the "revolution within the revolution"; and many women today are in positions of leadership in the war and in the party, and they are a great example for women all over the world.
"Either they win: the imperialism, the state, the governments, the masters... or we win!" So we said in a national assembly of proletarian women held in Palermo on March 8th last year. And of course we must win, whatever the cost, because we are right, because through the "revolution within the revolution" we women must fight for a new society, a socialist society, for a new humanity. And the great struggle of our women comrades and Indian women this says with strenght: it is not only a fight "per se", but it is an overall struggle calling to reckon with what kind of new society we want to build.

From India to the whole world...
let unleash the rebellion of women as a powerful force of the revolution!

Posted by maoistroad at 8:40 AM