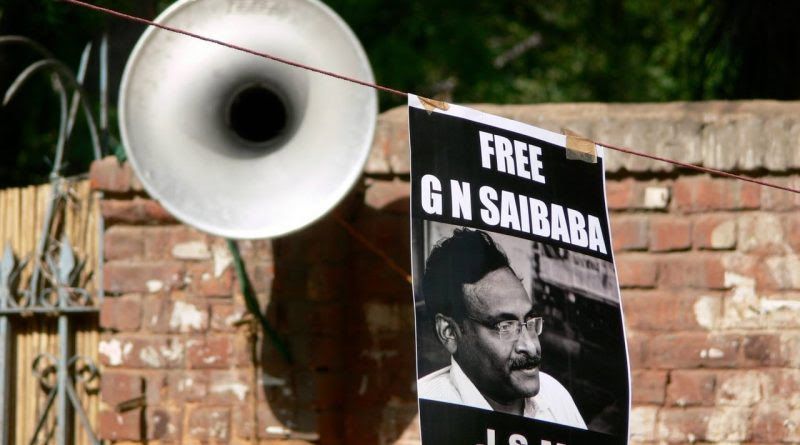 The largest labour group of British Columbia has raised voice for the physically disabled Delhi University Professor being incarcerated in the Indian jail since March this year.
On the International Human Rights Day, the British Columbia Fed issued a statement calling upon the Canadians to sign petition seeking the release of wheelchair-bound Prof. GN Saibaba who was sentenced to life after being branded as the supporter of Maoist insurgents.
The statement that also encourages Canadians to stand up for Rohingya Muslims and the LGBTQ community, described Saibaba as an “indigenous rights activist” who has been raising awareness about the repression of tribal people, Dalits or the so called untouchables and religious minorities in India.
The British Columbia Fed President Irene Lanzinger mentioned in the statement that there are many issues happening both locally and globally that the federation would like to highlight. She acknowledged that the imprisonment of Saibaba has gained attention internationally. The statement provides a link to an online petition for Saibaba.
Saibaba was first arrested in 2014 but was released on bail following an outcry at the world level. In March he was given life sentence and sent back to jail where he continues to face inhuman conditions.
He has been instrumental in mobilising political actions in Delhi against the eviction of tribal people from their traditional lands by the extraction industry with the backing of the Indian state. Due to police high handedness, many indigenous men and women have been forced to join Maoist insurgents who are active in the tribal belt of the country.
BC Fed is the first labour group in British Columbia to come out in support of Saibaba.
Earlier, Federal New Democratic Party leader Jagmeet Singh took to the social media to condemn the mistreatment of Saibaba by the Indian authorities.
In the meantime, Radical Desi held an emergency rally for Saibaba last Saturday on the eve of International Day of Persons with Disabilities in Surrey. Among those who spoke on the occasion included Human Rights activist and a practicing lawyer Amandeep Singh. Singh had drafted a petition launched by Radical Desi asking for the intervention of the Canadian government into the matter. It has received more than 1,000 signatures. Dashmesh Darbar Gurdwara Spokesman Gian Singh Gill who encouraged the temple congregation to sign the petition also spoke on the occasion.
So far two Canadian MPs, Sukh Dhaliwal and Peter Julian have accepted the petition. Responding to Dhaliwal who has already submitted the petition, the Ministry of Foreign Affairs has only acknowledged that it is aware of the case and encourages India to protect human rights.

Posted by maoistroad at 8:31 AM