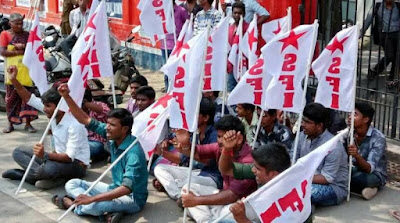 Visakhapatnam District, July 11, 2021: The CPI (Maoist) has extended support to the students and unions protesting against the job calendar, which was recently released by the Andhra Pradesh State government.

Comrade Aruna, Secretary of Visakha East Division Committee of the organization, released an audio tape here on Sunday in which she lashed out at the State government and appealed to people to fight against the policies of the government.

Comrade Aruna said that during his padayatra, Mr. Jagan had promised to provide 2.30 lakh jobs to solve unemployment problem in the State if voted to power. Two years after coming to power on June 17, the State government released a job calendar with just 10,000 jobs, disappointing the unemployed youth, who had high hopes of getting jobs under the new government, she alleged.

Since this is a genuine cause, the CPI (Maoist) is supporting the youth and the unemployed youth associations, Comrade Aruna said. The Maoist leader alleged that in the last three years, there was no recruitment in the State. Moreover with the New Education Policy, about 24,000 primary schools in the State were being shut down, jeopardizing the future of about 37,000 teachers, she alleged.

While notifications had to be issued for filling up of 2,000 posts under Group I and II categories, the State government has released just 36 posts, she said.

Comrade Aruna demanded that the State government release a new job calendar with 2.30 lakh jobs notification as promised. She also demanded that notification be given for about 2,000 posts under Group I and II categories. She said that the State government should fill up about 20,000 vacant posts in the Engineering Department. An additional 740 vacant posts in the Revenue Department should be filled through the Andhra Pradesh Public Service Commission, Comrade Aruna said.