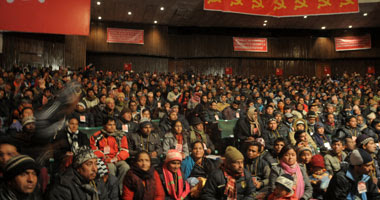 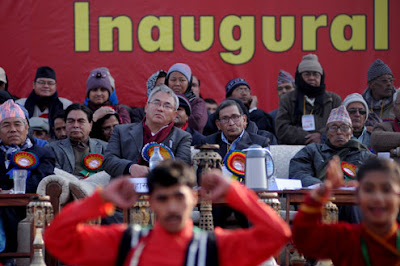 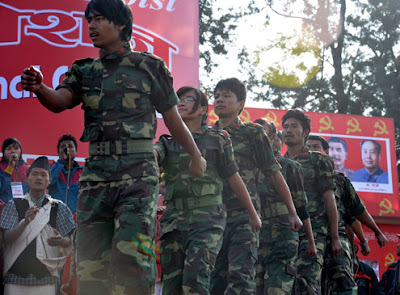 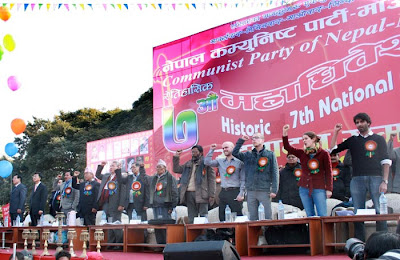 Comrades,
Our red salute to the First Congress of the CPN-M, a salute from Italian proletariat, from the ranks of our Party, from the struggling masses in Italy to our comrades in Nepal, to the proletarian and revolutionary masses!

A step that has given new hopes to the revolutionary aspirations of the people in Nepal and has been matter of joy for all the Maoists and revolutionaries, throughout the world, who have been concerned by and took stand against the Prachanda/Bhattarai attempts to liquidate the Nepalese revolution and enforce capitulation.

As your National Convention pointed out: ”The creation of People's Liberation Army, establishment of base areas and people's government, role played by workers, peasants, women, indigenous nationalities and Dalits; and the awareness developed in this whole process are some of the major achievements we have gained.” and the formation of the CPN-M and this Congress is a ““move forward by standing upon this base.”

Our Party, the Maoist Communist Party of Italy, took always a strong position, first in support to the revolutionary Left in the old Party and then to the formation of the new Party. We wish to back to a “regular” brotherly relationship between our Parties, two brothers parties between which can be “regular” agreement and disagreement.

We look with high interest the attention paid by your Party to the transformation of the leading comrades in their style of life, their role, to abandon comforts and privileges acquired in the previous phase. And in this process the Party is recovering the best energies from the old Party.

What is important for us is the ideological and political basis of the new Party not only in the context of the class struggle in Nepal, but in the international arena and in the struggle to reconstruct a new MLM international organization, after the collapse of the RIM.

The devastations of imperialist globalisation, wars of aggression and the devastating economic crisis of the imperialist system and its impact on proletarians and the broad masses have awakened worldwide a wave of struggles and revolts. In this context a potential new wave of the world proletarian revolution develops and emerges, with the people's wars led by Maoist parties as its reference points and strategic anchor. The realisation of this potential ultimately depends on how successful the Marxist-Leninist-Maoist parties are in fulfilling their revolutionary tasks at national and international level. Unfortunately there has been a lag in this matter. This is severely compounded by the crisis in the Revolutionary Internationalist Movement (RIM), which is now defunct.

In this situation steps need to be taken to work for the building of an effective international MLM organization that can aid the fulfilment of revolutionary tasks and take the collective voice of the Maoists to the proletariat and struggling peoples. Therefore, we should move towards holding a new conference of the Marxist-Leninist-Maoist parties and organizations throughout the world. This conference should take up the task of building an international organization based on Marxism-Leninism-Maoism.

We believe that this task must be jointly taken up with the involvement of the Maoist parties leading people’s wars, and all the Maoist forces, including those outside the RIM, so that the conference will benefit from their views and experiences. In order to achieve this aim a process of ideological, political debate must be carried out. As part of preparation for the conference and serving its aims, we will it necessary to organise a seminar on ‘Summation of Experiences of RIM, ICML, and other International Initiatives.’

Through this whole process the points of unity and differences can be identified and a relatively advanced platform can be arrived at, to become the basis of a new international unity concretised in a new international organisation. In the current circumstances, the execution of this revolutionary responsibility can demonstrate a practical expression of the internationalist communist slogan, “workers and oppressed peoples of the world unite.”

The imperialist system is going through the most severe crisis since the 1930s. The current attempts to address and overcome the crisis only serve to deepen and extend it.
The crisis has its origin in the laws of running of the capitalist system itself. It is the expression of the limits of production for profit, and the contradiction between productive forces and relations of production, including the general and global nature of the production and private appropriation. In the world scene this means an ever growing gap between the wealth of a handful of imperialist countries and the poverty of three quarters of human beings in the countries oppressed by imperialism, between the wealth in the hands of the bourgeoisie and the relative and absolute impoverishment of proletarians and masses in the imperialist countries , between the overflowing richness of a parasitic and comprador bourgeoisie and the living conditions of misery and hunger of the proletariat and broad masses in the countries oppressed by imperialism.

The world is still faced with two possibilities: the exit from capitalism or a painful temporary recovery from this crisis by strengthening, enhancing the mechanisms of capital and thus prolonging the misery of the masses.
The imperialist bourgeoisie all over the world take advantage of the crisis to restructure imperialism on a global scale and save the interests of their class for their profits.
This leads to unloading the vicious weight of the crisis on the workers and masses. In both the oppressed countries and imperialist countries, unemployment, job insecurity and the cost of living increase, exploitation is ratcheted up to modern forms of slavery, workers' rights are reduced, social achievements won through years of struggles are erased, factories are closed with massive layoffs, peasants are ruined and driven to suicide, cuts in social expenditures and privatization of education and healthcare grow, the logic of commodification and profit is extended even to primary goods, such as water, air, sun, etc.

In the countries oppressed by imperialism, the protests, rebellions and liberation struggles have found in the revolts in Arab countries and in the Persian Gulf a new height and a new dawn. Young people, proletarians and the masses and, in some cases, organized sectors of workers, attacked and overthrew dictatorial regimes subservient to imperialism that seemed permanent. This has paved the way for new anti-imperialist, anti-Zionist, anti-feudal, new-democratic revolutions.

In this international situation the formation of your Party and this Congress take an even greater importance for the ICM.
The best contribution that Nepalese communists can give to the ICM is the criticism of prachandism . It requires a dialectical and self-critical of those have termed as “Prachanda path”, “democracy of 21st Century” and the the CPN-M should also assess the responsibilities for the collapse of the RIM

In spite of its positive aspects, RIM could not fulfil the tasks it had taken up and entered a crisis. When revisionism of Bob Avakian’s post-MLM 'new synthesis' variety became dominant in the Revolutionary Communist Party-USA and of the Prachanda-Bhattarai variety became dominant in the United Communist Party of Nepal (Maoist), not only did these parties deviate from the path of revolution and communism, but the destructive and disparaging effects of their counter-revolutionary lines negatively affected the parties and organizations within RIM, specifically the Committee of RIM (CoRIM), in an extensive and profound manner. These are the immediate ideological sources that have led to the current crisis and collapse of the RIM.

Posted by maoistroad at 4:13 AM