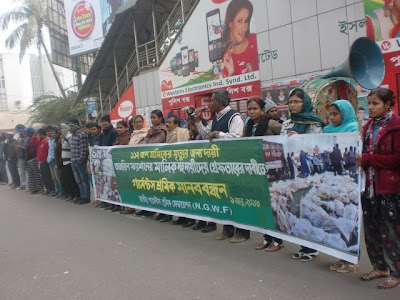 National Garment Workers Federation ( NGWF ) today, January 9, threatened to launch greater agitation program if Tazreen Fashion’s owner were not arrested immediately for his responsibility in killing 112 workers in factory fire on November 24, 2013. The threat was issued from a Garment workers’ human chain that was held today in front of National Press Club in Dhaka city. Over 100 garment workers participated in human chain program that was took place from 12:00 noon to 1:00 pm.

Speakers said, “112 garment workers have lost their lives in Tazreen Fashion fire. Several hundred workers were injured in this incident. The enquiry committee formed by the Home Ministry and Parliamentary Standing Committee on Labour Ministry held Tazreen Fashion’s owner responsible for the death of 112 workers. A case was filed in this connection. But till today, Tazreen Fashion’s owner was not arrested for unknown reason. It is a shame & against justice.”

Speakers demanded to publish real list of dead & injured workers of Tazreen fire, providing necessary medical treatment for the injured workers and payment of minimum Taka 2.5 million to each of the families of the dead workers under the definition of ‘loss of earning’.
Demanding to the factory owners, Government, BGMEA and buyers . They also demanded to make garment sector ‘safe workplace’ and urged for taking initiative immediately so that no garment workers dies in factory fire or accident in the future. For this they urged Factory owners, BGMEA, Government and Buyers ( sourcing from Bangladesh ) should come forward with an joint initiative with trade unions .They also urges all buyers ( sourcing from Bangladesh ) sign the Health Safety MOU immediately .
Stressing the need for accepting trade union rights as a basic right of the Garment workers, the program demanded implementation to this demand immediately.