A strike against the low-intensity war against women, as women, made of femicides and rapes by men who hate women, perpetrated mostly within the “holy family”. The killings of women in Italy are becoming a massacre. Every two days a woman dies murdered – worse than in a real war – and every day big and small sexual violence, stalking – more than one case per day, and often it turns into murder – harassment at the job, abuses on women, increase and become facts of "ordinary" oppression towards women.
But it is also a strike that includes the whole condition of double exploitation and oppression of women by the bosses, the government, the State, the Catholic Church, which are the underlying cause, which create the social and ideological humus of “modern Middle Ages” in which the femicides ripen against women. The "Strike of Women" starts and will center on the jobs places, workers and toiling women, for this we choose the form of “strike”, but it is correct to speak about “total strike of women”, because it concerns and calls all the proletarian, students, unemployed women, housewives in the neighborhoods, women comrades in struggle movements, immigrant women , feminists etc.

A strike of class and gender that wants to expose and fight the whole condition of women's lives!
The “strike of women” is a "historic" event not only for women, but for the entire proletarian class, for the revolutionary movement. The strike will be a spark that will light the path of long-term struggle of the majority of women against the entire condition of exploitation and oppression that this society want to impose and of which femicides, rapes and violence are the most barbaric results. And the 25 November will mark a major milestone of this path, that can only have as goals the revolution, and, as we learn from Maoism, the “revolution within the revolution”.

The “strike of women” is a slogan for which the Revolutionary Proletarian Feminist Movement has been working for some years, and that step by step, especially in recent months and after the national mobilization made by the comrades of the MFPR on 6 July in Rome, has gained consensus and participation.
Its realization is an event of big impact and breaking.
Because the strike of women, as it puts forward the exposure of the entire conditions of the majority of women, puts into question the work and not work, the discrimination in the job, the role of oppression of the family and the family as wanted by the bourgeois society, it challenges the common idea of the women, their role of subordination. That is, it puts into question everything!
That is what it puts and that is why the strike of women scares.
It is not just a matter of some demands. The battle of women is inevitably at 360 degrees. It aims to a totally different society, different social relationships, different personal relationships, to that all the life has to change.
Women, particularly proletarian women, when struggle, bring a force more, bring the need for an overall battle, that they also bring back in their everyday life.

The strike of women is for women. It serves first of all to women, so they find the strength to rebel, not to accept as inevitable a condition of oppression, subordination, their role in the family, to become a reality of struggle that worries and scares the bosses, governments, the State, men who hate women.

But the strike of women, of workers, plays a role also within the working class. It wants to be a battle of rupture, which also requires a transformation within workers, among their workmates.
In this sense, the total strike of women strike puts in facts the need of revolution, in which women will be the most determined force.

10:11:13
WHAT WE DO NOT WANT:
- NO to the increasing presence/control of police forces in the cities, on the streets. We do not want that those who in prisons, in the Centres of expulsion for migrants, use even the rape, harassment, sexual abuse against women, those who beat us during the struggles, become our “defenders”;
- NO to Task-forces, they feed the “security-climate”, the social control, which turns into less freedom and fewer rights for women. YES, rather, to "light up" and make every area of the cities places full of life, promoting the opening 24 hours per day of centers, parks, freely managed by organizations of women;
- NO to the transformation of the trials for rape in indictments and investigation on the “moral” of women;
- NO to counseling centers or confessional centers turned into places of control/suppression of the women's choices;

AND WHAT WE WANT:
- “Houses of women” in every town and the neighborhood of the largest cities, managed by women, of monitoring and struggle, with free services of lawyers, doctors, psychologists, experts chosen by women.
- Immediate action against males charged with violence, stalking, sexual harassment, ill-treatment.
- Immediate removal from jobs and institutional seats of who exercises sexual harassment and violence;
- Prohibition of stay at home for husbands, partners, fathers, brothers and other relatives charged with violence and ill-treatment;
- Emergency procedure in trials for rape and femicide and admission of women's organizations as civil parties, free legal aid for women, classification in the criminal justice system of the crime of rape among the most serious offenses;
- Simplifications and emergency procedures for cases of separation and divorce, legal aid for women;
- Prohibition of the use of the female body in advertising and the sexist use of language;
- Abolition of sexist texts, with discriminatory content, in schools and universities, removal of teachers who propagandize them.

Against discrimination and oppression, basis of sexual violence and femicide
- Lavorare per tutte le donne, reddito minimo garantito per tutte le donne, in modo che la dipendenza economica non è un ostacolo per la rottura di legami familiari;
- Transformation of all temporary job contracts into indefinite. Equal pay for equal work;
- Prohibition to investigate marital status, maternity, sexual orientation, for employing or sacking.
- Right of citizenship and equal rights of employment, wage and regulatory frameworks for immigrant women;
- Reduction of working hours without loss of pay. Lowering of the retirement age of women, as acknowledgment of their double work;
- No persecution of prostitutes, rights to social services for all women;
- Defense and expansion of the right to abortion, abolition of conscientious objection, free operations and facilities, lay counseling centers managed and controlled by women.
- Free access for women to health and social services;
- Socialization/gratuity of basic household services: kindergartens, health care, services for the elderly, etc. 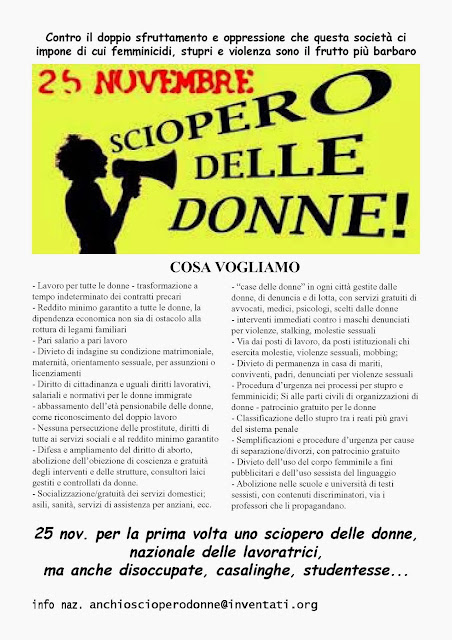 Posted by maoistroad at 8:50 AM