AUSTRIA: Actions on 20 years of PLGA

Below we share images from a report of various activities organized to mark the 20th anniversary of the founding of the Indian People's Liberation Guerrilla Army (PLGA) in Austria. (Source: rotefahne.at)

Shortly before Christmas, on December 22, 2021, activists organized a rally on Vienna's main shopping street under the slogan "Support the Revolution in India." Flyers, a banner and speeches were used to draw attention to an important anniversary of the Indian revolution. In India, a year-long campaign to mark the 20th anniversary of the founding of the People's Liberation Guerrilla Army (PLGA) was held from December 2020 to December 2021. 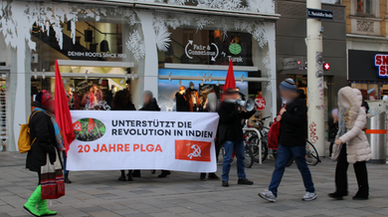 Workers in the industrial city of Steyr showed solidarity because the PLGA has contributed greatly to the liberation of oppressed workers and peasants in India since its founding 20 years ago.

In the midst of the lockdown, a united picture was taken in Linz and agitation was carried out in the streets.

Posted by maoistroad at 2:31 AM