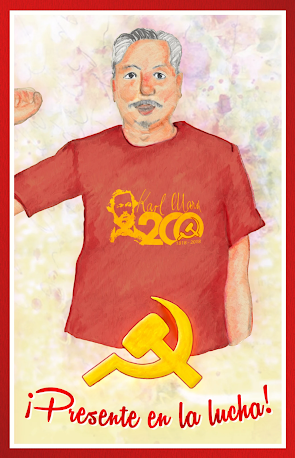 The title is straightforward enough and reflects our genuine concern about the manifestation of a line and a style of work that in the eighties and nineties of the last century did much damage within the communist movement in various countries of Europe and in other parts of the world.

We refer to the black line that prevailed in some organisms generated at the time by the PCP, and in particular the MPP in Europe. This line, whose main executor was the renegade Javier Esparza Márquez – head of the aforementioned organization – was characterized by a strong sectarianism; availing itself of its prestige to give credentials to opportunists like "Víctor Fernández" and his "PCE" in the Spanish State or to label anyone who did not obey its commands as "revisionists" and "opportunists" by shamelessly peddling alleged instructions given by the PCP.

The real face of these individuals showed up in their rapid incorporation, from the end of 1993, into the right opportunist line (ROL) and their pulp documents calling for a "Peace Accord". The renegade Esparza went so far as to claim that he had spoken to Chairman Gonzalo by telephone to justify his capitulation along with relatives of Comrade Norah who were active in the International Emergency Committee.

The same anti-Maoist and harmful style was adopted by those who, denouncing the call for the "Peace Accord", tried to rebuild the work of the generated organisms destroyed by Esparza and other liquidationists. They claimed to want to rebuild but acted with the same right-wing and petty-bourgeois style of those of the ROL. Take "Tomás" in Sweden, for example: an individual coming from Vanguardia Revolucionaria, who practiced this style by trafficking with the People's War and the PCP to surround himself with a retinue of uncritical and obedient supporters. He also gave credentials to sectarian groups like the Canaries of the so-called "PCE" in the Spanish State.
They shouted a lot of "Long live ———!", but their real practice was the destruction of all serious work for the reconstitution of the Maoist communist parties in Europe. We communists in Europe learned it along the way.

It was tough, but we learned not to bow our heads in front of those arrogant ones who wave false credentials or prestige to traffic with Marxism-Leninism-Maoism, principally Maoism, or with the people's wars led by the Maoists, as part of the World Proletarian Revolution.
This is something that was also taught to us by Chairman Mao, when he called to be vigilant against careerists, conspirators and double-dealers so as to prevent them from usurping the leadership at any level.

That is why we view with deep concern the practice of some comrades who seem to lack this knowledge and may reproduce these harmful behaviors, at a historical moment in which the work of the Maoists is beginning to take important steps in many parts of the world.
History teaches us that such profoundly anti-Maoist approach is just the spearhead for an undermining and destruction of both national and international work which is linked to rightist lines posed as ultra-left.

It is therefore necessary to call on our comrades in all countries to practice criticism and self-criticism in a responsible manner, as Chairman Mao taught us. Making it a weapon to advance and to help those comrades or organizations that make mistakes or whose understanding is insufficient, as well as to properly handle and define the contradictions and their nature, treating them correctly. Breaking and  drawing a clear distinction between us and the practice of that black arrogant and rightist style, that masks under the insult and hot air its lack of a proletarian ideological and political analysis.

Such a style was always completely alien to MLM and usually hides evil machinations.