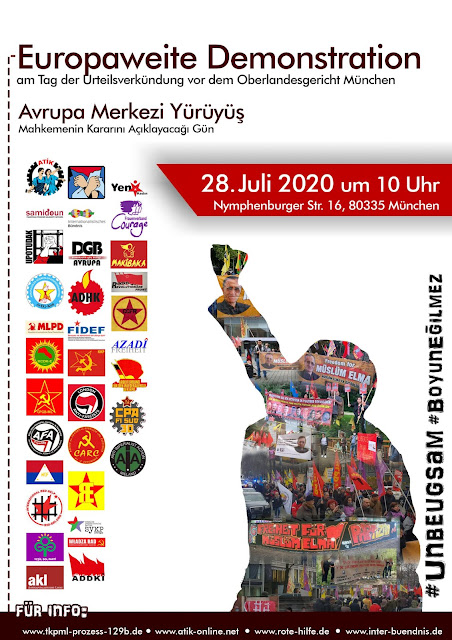 We demand: acquittal for all accused and freedom for Müslüm Elma
In the four-year trial with the constructed accusation of "terrorism" against ten revolutionaries from Turkey in the Higher Regional Court in Munich, the state prosecutor's office demanded draconian punishments.
The accused are not even accused of concrete crimes, but only of membership or "ringleadership" in the TKP / ML, which is not prohibited in Germany. So it's about their revolutionary mindset and organization! The Federal Prosecutor wants this to be punished with prison terms from three years and six months, up to six years and nine months. After nine out of ten defendants were released from custody, they should still go back to prison.
Due to the constructed accusation of the so-called "ringleadership" in such an organization, the main accused Müslüm Elma is the only one who is still being held in custody after five years and almost three months.
In the pleadings and closing statements by the accused, the procedure of the bourgeois judiciary was exposed as an anti-communist maneuver, which is used to provide protection to the fascist Erdoğan regime in its fight against revolutionary forces and the Kurdish liberation movement, but also to criminalize the communist movement Liberty ideology in general.
Müslüm Elma, emphasized in his closing statement before the court on June 29th 2020:
"We come from the tradition of resistance. The accusation of 'terrorism' is one of the greatest lies of the 20th and 21st centuries, which the imperialist robbers and their collaborators have put together to disguise the crimes they committed against the oppressed peoples of the World and defame their legitimate struggle. But all these lies cannot prevent the demise of the imperialists. We are internationalist revolutionaries ... you cannot judge us ..."
These clear words by Müslüm in his closing statement are further evidence of the high morale and indomitable will of all defendants to reject the defamatory and constructed accusation of terrorism and to show the collaboration of German imperialism with the state terrorism of the Turkish state.
But why this state rage of persecution against Turkish opposition figures?
On the one hand, it is a favor of the federal government in collaboration with the Erdogan regime. The Munich court is not interested in the fact that a significant part of the "evidence" was contributed by the Turkish secret service through illegal espionage. Not even that Erdogan has established a fascist regime, invaded Efrin in violation of international law, occupied parts of Rojava and just recently had Kurdish and Yazidi settlements in northern Iraq bombed.
The process - an instrument for expanding right development in Germany.
It is explicitly an anti-communist pilot procedure, which, based on the KPD ban of 1956, is intended to help criminalize revolutionary activity. A model judgment is intended to create further opportunities to accuse trade unionists, strikers, anti-fascists, environmental fighters, leftists and revolutionaries, and - if they are not German citizens - to deport them. As said, it is not specific acts that are being charged here, but the convictions of the accused.
This process is linked to the expansion of the emergency laws passed in 1968: to expand state repression, for example through the new Police Law, and currently to use the corona pandemie to reduce political democratic rights and expand the powers of the police.
What the rulers fear is our union.
The global economic and financial crisis that broke out in 2018 - deepened by the corona crisis - will further exacerbate the social contradictions. They will lead to further mass struggles and political crises. The suitability of the capitalist system has long been counted. The number of people who have a problem with this system in the fight against exploitation and oppression is growing. Against this background, the union of all progressive forces is the order of the day. Only in active cooperation, with the perspective of an anti-fascist and anti-imperialist united front, will happen, what Müslüm Elma aptly formulated: "This process will not be decided in the courtroom, but on the street."
We will not accept a conviction!
● Acquittal for all accused
● Freedom for Müslüm Elma
● Abolition of §129a + b and the end of the "persecution authorization"
● No more cooperation with the Erdogan regime by the federal government
● Long live the International Solidarity

Come to the protest demonstration on 28.07.2020, at 10:00 a.m., the day the judgement is pronounced, at the Higher Regional Court on Nymphenburgerstraße.
Posted by maoistroad at 6:00 AM