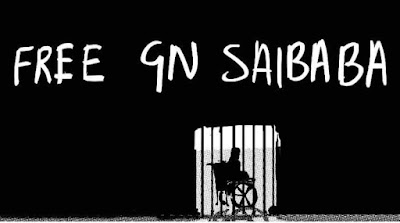 Advocate Aakash Sarode told The Hindu, “I had taken permission from the jail authorities to get him a plastic bottle and only then I had got the bottle. No reason was given to me for refusing the bottle. Sai cannot carry a glass bottle because it is heavy and he has severe pain in shoulders and metal bottles are not allowed inside prison.”

He said Saibaba had been requesting the jail authorities to allow a plastic bottle for the last three weeks as it got very hot inside the ‘anda’ cell and the temperature in Nagpur was about 45 degrees.

Saibaba’s wife, Vasantha Kumari, said: “There is a small pot kept in the cell and Sai keeps requesting his helper, who is also a convict, to give him water. But at night when he feels thirsty he can’t wake his inmate and bother him for water. He has started getting unconscious because of the heat and lack of hydration inside the anda cell.”

As per protocol, when any item is sent to a prisoner, it goes to a two-star jailor. After he approves it, it goes to the senior jailor, who also needs to see the items and approve it. However, as per Mr. Saroda, “Without seeing the bottle, the jailor refused to accept it.”

Despite several calls and messages, Superintendent Anupkumar Kumre did not respond to The Hindu. However, some from his office, requesting anonymity, said, “We had given permission for a plain, transparent plastic bottle for Saibaba only on humanitarian grounds because he is handicapped. But what his lawyer got was a jar. Jars are not accepted in jail. If they send a simple plastic water bottle, we will take it.”

It is reported that Saibaba’s left hand is on the verge of failure and there is acute pain spreading in both his hands. He is plagued by pancreatitis, high blood pressure, cardiomyopathy, chronic back pain, immobility, and sleeplessness.

On March 7, 2017, the Sessions Court at Gadchiroli sentenced him to life imprisonment for alleged links with the Communist Party of India (Maoist) under the Unlawful Activities (Prevention) Act. His appeal against the judgment is pending before the Nagpur bench of the Bombay High Court for the last five years.

Posted by maoistroad at 8:25 AM