Italy: interest and participation also on the part of democrats in the international solidarity campaign and for the release of political prisoners in India 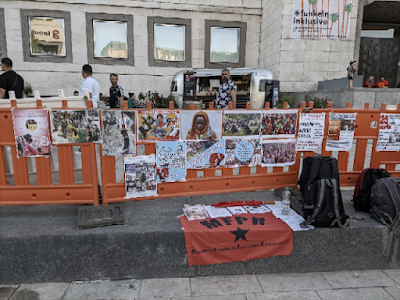 I address you, on. Luigi Di Maio, because you have just been to India and you could speak with the Prime Minister of India, Narendra Damodardas Modi. However, I hope that all the concerned authorities can take an interest in the problem. I recently participated in a conference in Milan which talked about the many women who are political prisoners in India, where a fierce and widespread repression is carried out to impose economic interests at the expense of thr right to life of the Adivasi indigenous peoples and Dalit caste.

In recent years, especially in 2021, the extermination policy of female prisoners and political prisoners intensificated. Repression and imprisonment multiplied, as well as the reports about sexual assaults and violence against female prisoners. A real extermination is taking place in India under the silence of the media and with the complicity of all countries, including Italy.
Big Indian and transnational corporations, supported by the central government, wage war on the Adivasi populations, through military and paramilitary forces, to force them to abandon their homeland and build there devastating mines and factories.
The most affected by this repression are above all women, who fight in the front line against class and caste injustice, against discrimination and sexual violence, against racist laws and ethnic cleansing, against the militarization of villages, privatization and the exploitation of natural resources by multinationals to which the government sells off not only the territory, but also the Adivasi people who live there, forcing them to abandon their ancestral lands.
This repression is particularly raging against women, combining the violence of police and army guns with rapes and sexual torture, used as weapons of war.
In the last decade, 477 women have died in the prison. Today thousands of women are languishing in prisons, suffering in human conditions, framed in false cases, raped and tortured by police officers. Police mounted a huge number of false cases to hit the women who had been active in the movement to defend natural in all the states of the Indian subcontinent. Social activists like Soni Sori and Sudha Bharadwaj, forest rights activists like Sukalo Gond, Rajkumari, Kismatiya, women from Narmada Bachao, Andeolan women in Kudankulam, Adivasi women, cultural activists like Sheetal Sathe are among the many who continue to be persecuted daily by the Indian government because they continue struggling for the survival of the marginalized Adivasis and Dalit caste communities.
In addition to physical and sexual violence, women in prison are systematically discriminated against compared to men in terms of access to education and health care, the food and their specific health and hygiene needs related to the menstrual cycle, pregnancy, nutrition of childern. In fact, many women live in prison with their children, often conceived following the rapes they suffered in custody. (see “Women in Resistance, Women in Prison”. Delhi, 01/18/19: https://cjp.org.in/women-prisoners-recount-jail-horror-stories/).
I am confident that you, Hon. Luigi Di Maio, and all the addressed authorities may intervene in the manner you feel most appropriate and effective.
Best regards
Amalia Navoni, former councilor of zone 8, Milan. 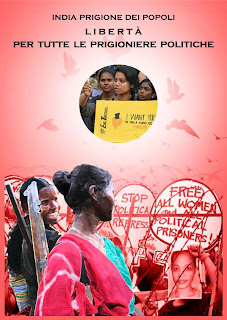 PS: I also got this information from the “India prigione dei popoli, libertà per tutte le prigioniere politiche” https://femminismorivoluzionario.blogspot.com
Posted by fannyhill at 7:09 AM