honour and glory to comrade Kishanji 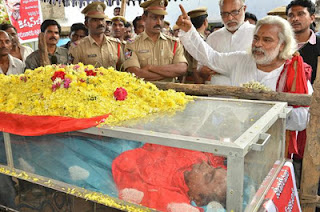 Revolutionaries and oppressed peoples all over the world are mourning the assassination of CPI(Maoist) leader Kishenji. The loss is especia lly difficult for the people of India, even as they gather to celebrate his life and contributions to human liberation.

There is evidence Kishenji killed in what is called a "fake encounter." This is an incident when police or paramilitaries capture a person, kill her/him in detention, and then manufacture evidence to make the killing look like it occurred in combat. It is nothing but cowardly, ruthless, cold-blooded murder. Indian state forces have often engaged in this practice to cover up their ruthless persecution of Maoist and Adivasi (tribal) people
Hundreds pay last respects to Kishenji

Maoist sympathisers, revolutionary writers, singers, representatives of various people's organisations, civil liberties activists and hundreds other on Sunday paid their last respects to slain Maoist leader Kishenji in his hometown Peddapalli in Andhra Pradesh. People in large numbers  turned up at Kishenji's house to pay their tribute and console his family members. With folded hands, the mourners were seen passing by the flower bedecked coffin amid huge police presence.
Maoist sympathisers say it was their last 'red salute' to their comrade who left his house 35 years ago to join the movement and fight for the cause of oppressed people.
The last rites of politburo member of Communist Party of India (Maoist) will be performed after 1 pm.
Led by revolutionary balladeer Gaddar, dozens of artists paid their respects by singing revolutionary songs, eulogizing the slain leader.
Kishenji's body was shifted to the town in Karimnagar district, 200 km from here, by the police late Saturday amid tight security.
Kishenji's mother Madhuramma was inconsolable on seeing the body of her son, who never met her after he went into hiding over three decades ago.
Mallojula Koteswara Rao alias Kishenji, who was number three in Communist Party of India (Maoist), was gunned down by security forces on Thursday in West Bengal's Burishole, 10 km from the border with Jharkhand.
Kishenji's former comrades in the movement, his friends in school and college were among those who paid their last respects.
Police took control of the body as soon as it arrived at Rajiv Gandhi International Airport at Shamshabad, about 25 km from Hyderabad, on Saturday night.
Police foiled the attempts of Maoist sympathisers to take the body into the city and keep it at Tank Bund to enable people to pay their last respects.
Kishenji's niece Deepa Rao and Maoist sympathiser Varvara Rao, who accompanied the body from Kolkata, lodged their strong protest against the police attitude.
"They not only killed him in cold blood but are also denying us the right to pay our last respects and perform his last rites the way we want to do it," said Rao.
*************************************************

Posted by maoistroad at 5:46 AM