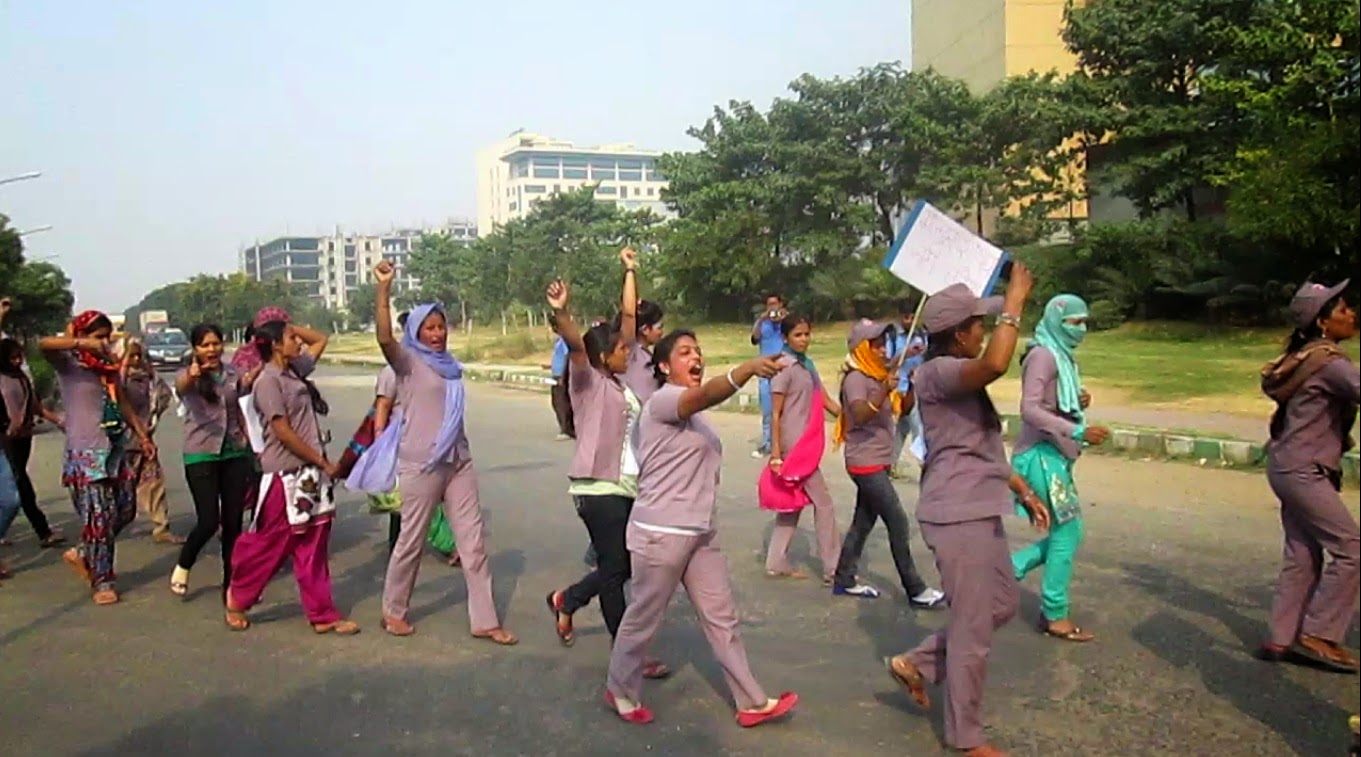 Occupation strike at 3 plants of Omax Auto in

together.
For last many months, discontent was brewing inside the Omax Auto factory, while the settlement process with the Union was on. The contract workers’ discontent is particularly noticeable here, in conversation with but also not completely

subsumed within this ’settlement processes’.
Meanwhile yesterday, 19th November, the striking workers at IMT Manesar, 2km apart, at Munjal Kiriu (Munjal Kiriu Employees Union) for last two months, and in ASTI Electronics led by ASTI Theka Mazdoor Sangharsh Samiti, came together in a joint demonstration at the gate of the ASTI factory, where the Haryana police and the management’s agents tried to stop

them.
Workers and Union members from Maruti Manesar, Hi-Lex Manesar, Endurance Manesar, Autofit Dharuhera and so on participated in the spirited gate meeting. Workers organisations

of ASTI factory, Manesar, in Haryana are fighting back with their courageous struggle. All 310 contract workers of this auto parts factory were illegally terminated

and they are on strike since 1st November. These workers are raising important question on contractualization in the organized sector which even central Trade Unions have constantly avoided. Over 250 of them are women

workers whose militancy is redefining the overall struggle and changing

the gender relations within the workers movement. On 17th Nov, workers of ASTI were joined by workers from other factories in a spirited rally in the Manesar industrial area.
ASTI Electronics India Ltd is a subsidiary of Asti Corp, Japan which produces wiring harness, switches, controllers, and other automotive and electronics parts. It supplies to auto companies like Suzuki Motorcycles, Maruti Suzuki, Yamaha Motors, Omron Automotive etc. It has branches in Japan, China, Vietnam and India. In harnessing unit production

at Manesar, there are two modes of production; one is manual and the other is automatic. Production takes place in three shifts. The manual section produces three thousand units per shift with 50 employees, of which only 17 are permanent. The Automatic section produces 12000 units per shift employing 25 workers, of which only 3 are permanent. There are two layers of production process used in this company; sub assembly line where each table

is occupied by one worker and later the processed material goes on the conveyor belt assembly line. Most of the workers work as operators. Contract workers earn between 5000 and 7000 per month.
On 1st November 2014, Company officials, without any prior notice, announced that all contract workers are terminated with immediate effect. The decision is not actually as abrupt as it looks and has its root to workers’ demand of forming union, earlier this year. On 18th February 2014, workers demanded to form union which was followed by one day strike in the factory.  February strike resulted in registration of the union affiliated with HMS. Contract and permanent workers contributed 1500 to 5000 rupees respectively for this cause. The union successfully negotiated with factory management for wage settlement and permanent job for the contract workers. However the management had other ideas and they sacked contract workers as a ploy to deny them permanent positions.
Since 3rd November, all 310 terminated contract workers including 250 female workers are sitting outside the factory premises against the termination. Two meetings with labour inspectors have already taken place without any effect. Workers held a rally in Manesar on 13th November from Munjal Kiriu to ASTI in solidarity with the workers of protesting against the suspension in Munjal Kiriu. Workers from several factories like Maruti, Baxter, Munjal Kiriu, Auto fit took part. This rally ended in front of ASTI gate.
Terminated ASTI workers, mainly lead by women comrades, are going to hold another gate meeting on 19th November at 2:30 PM. They have given call to all progressive alliances to participate in this meeting. Kindly join in solidarity with their just demand against termination.
Labour Solidarity Forum
[For more details, contact Santosh (8860322089) and Amit (9873057637)] 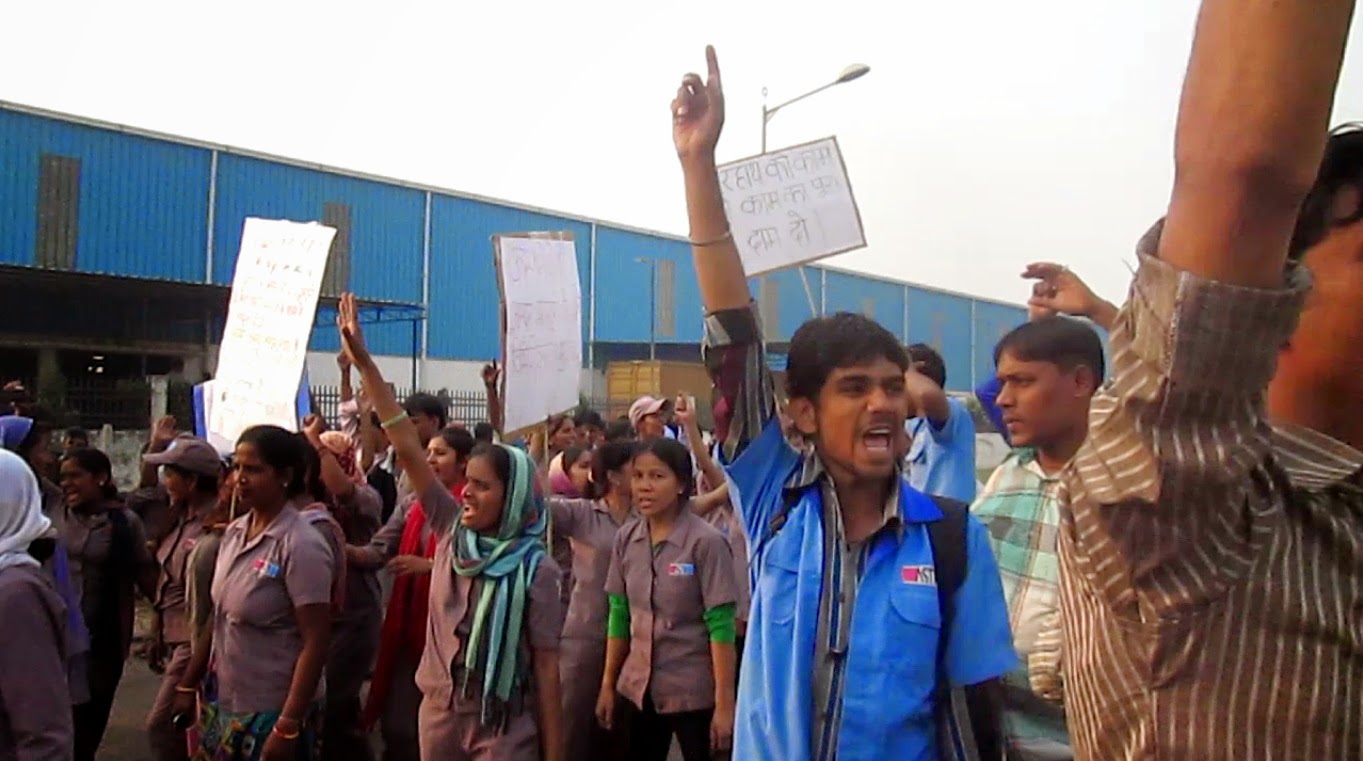 Posted by maoistroad at 9:12 AM