Tunisia - boykott polls and repression against maoist! -info from Italy 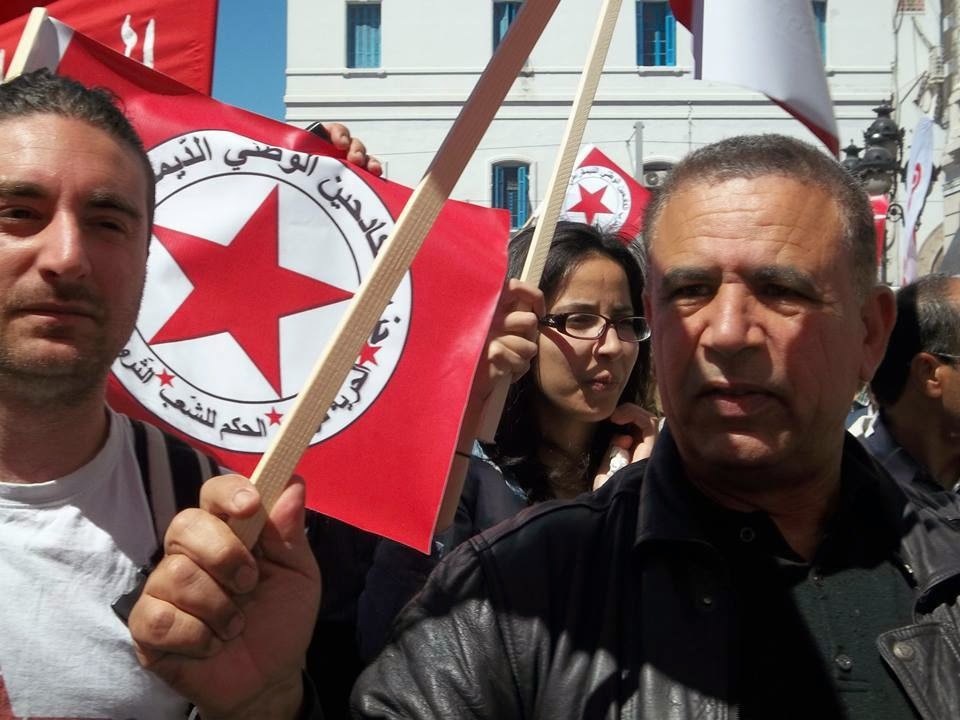 Today the presidential elections in Tunisia are taking place, the media from all over the world are presenting the event as the crowning achievement of democracy in the country and the final act of the "transition period" that will lead to the formation of the new government and the "stability politics "in the country.
This is the propaganda of the bourgeoisie that as a block at an international level is supporting  all the tendencies of his class in the North African country.
In Tunisia, the atmosphere of unity among the bourgeois forces of various nature is no different, all the parliamentary forces from Ennahda (Islamists) to Nidaa Tounes (laic connected with the former regime), the Popular Front (Social Democrats call themselves Marxists) are participating in the electoral process which in fact is restoring the old power of Ben Ali without Ben Ali (Nidaa Tounes has already obtained a relative majority in the legislative elections and its leader Essebsi is among the two favorites as future president among 27 candidates).

The only real strength of popular opposition is represented by the left-class Marxist-Leninist-Maoist. Different parties and Maoist organizations in early October have joined forces, creating a Committee of Electoral Boycott already targeted by reactionary forces and tunisian state of police.

Yesterday, on the eve of the presidential election repression hit the general secretary of the National Democratic Party of workers (more laborious in Tunisian ed). In a climate of "fighting terrorism" (domestic one) specified by the Government in the Salafist group Ansar al-Sharia, the police state looks Tunisian brush up "old" methods to silence even the actual popular opposition and class with real roots among the masses and workers, it is unacceptable but they call it democracy!

This is further confirmation of how the active electoral boycott  represents the main enemy for all Tunisian parliamentary forces.

We express our greatest solidarity to comrade Farid and all  Tunisians comrade hit by the repression, we also invite all anti-imperialist forces of our country to spread this news and to express militant solidarity with the tunisian revolutionaries.

Below is the unofficial translation of the comrades' statement:

"The state police is caming back in Tunisia ...
Just an hour after the press release about  the boycott of the presidential elections appeared this morning, 30 police officers, some of them covered ub by ski masks, they arrested comrade Farid El Alibi general secretary of the National Democratic Party of workers (more laborious in Tunisian ndt ), all this while comrade was in his car on the road Sfax-Mahdia, they searched inside his car in order to incriminate him but did not find anything illegal, some citizens have approached the car and the comrade denounced for a while about 'police abuses. Then the police transferred the general secretary to  the police station of El Bosten B where he was held for two hours. "

the new issue of proletarian communist organ of the Communist Party maoista- Italy reports an extensive article about the elections and the political situation in Tunisia.
Soon we will publish two pamphlets about tunisian  political and social situation, one of them is an extensive report.

Posted by maoistroad at 4:07 AM