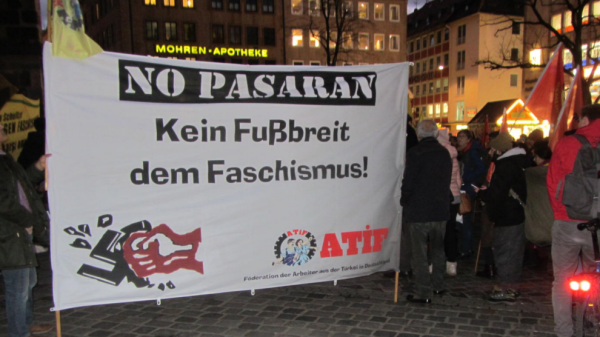 Tens of thousands of people took to the streets across Germany on Thursday evening to protest against the fascist attack in Hanau and to express their sadness and anger. 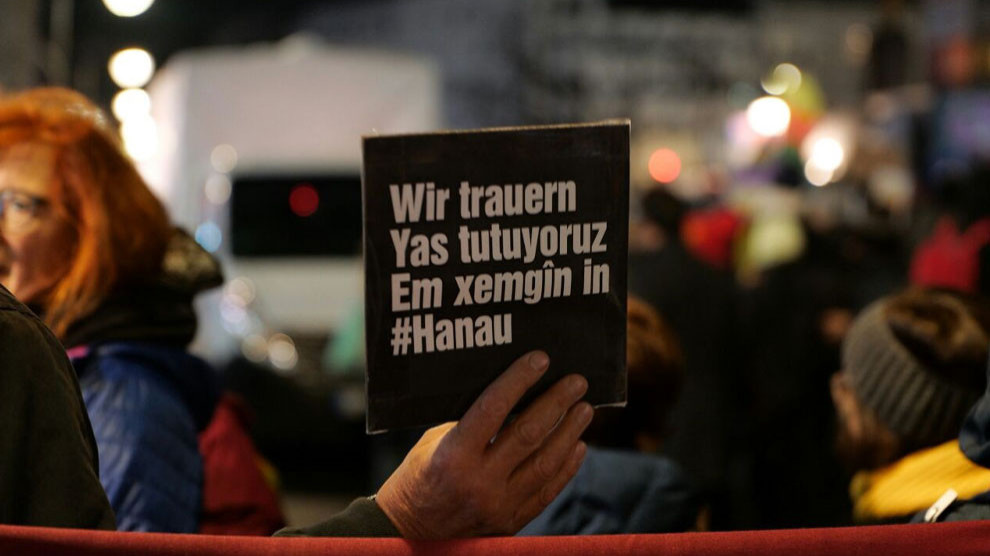 A right-wing extremist killed nine people in a terrorist attack in Hanau city of the Hessen state, Germany on Wednesday before shooting his own mother and himself afterwards. Among the dead and injured are also several victims of Kurdish origin. The names of eight of the nine victims are Ferhat Ünvar, Gökhan Gültekin, Mercedes (last name unknown), Hamza Kutovic, Said Nessar El Hashemi, Can Gülcü, Bilal Gökçe and Sedat Gürbüz.
Nationwide demonstrations, rallies and vigils took place on Thursday evening in more than 70 cities to commemorate the dead and to set an example against fascism.
Hanau
In Hanau, a public memorial service for the victims of the racist attack was held from 6 pm on. The people came in their thousands, vacillating between tears, anger and grief. Among the speakers were President Frank-Walter Steinmeier and Minister President Volker Bouffier. His speech was interrupted by angry and loud interjections of "NSU" and "Release the NSU files". The interventionist Left (iL) commented on Twitter: "The political representatives neither let the victims have their say, nor do they call a spade a spade: Racism. There is only disrespect for the dignity of the relatives. It's unbelievable what's happening here again."

Celle
In Celle, after an appeal of the local campaign #Riseup4Rojava under the motto "Solidarity and protest - Together against fascism", about 90 people spontaneously gathered on the runway at 6 pm. The participants emphasized that this attack is not an isolated incident, but is connected with other attacks, countless attacks and the ever -ncreasing presence of racism and right-wing ideas.
The solidarity with those affected and the grief was expressed by a minute's silence.
It was pointed out in speeches that fascism was a major problem everywhere. One speaker said: "And again it happened and again only consternation..." and referred thereby to the sad tradition, which racism and fascism have also in the region Celle. For example, the Nazi farm in Eschede, which was bought by the NPD last year, has existed for many years. Also migrants in Celle but also elsewhere are again and again at the mercy of racist hostilities and there are more and more arson attacks and murders. 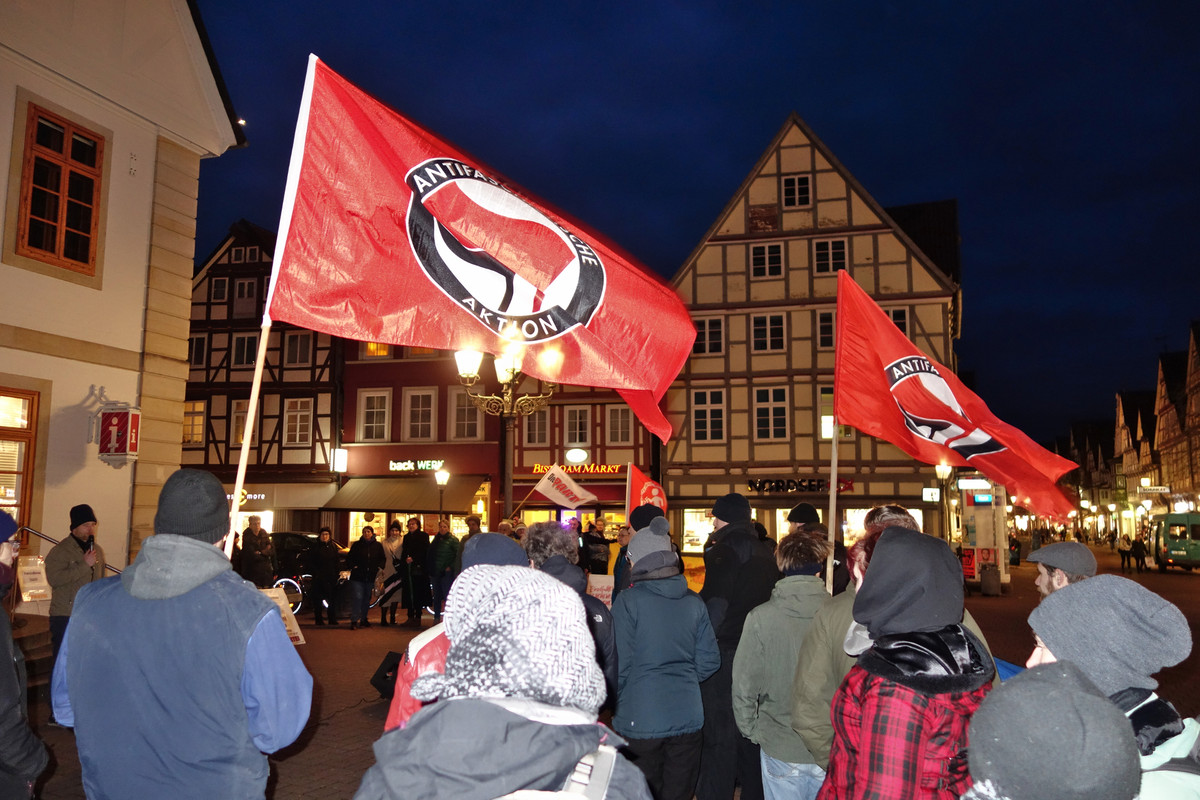 "Sadly, here in Celle there is also always open reference to fascist ideology. Two and a half weeks ago, a banner of Gerüstbau Niewerth hung on the Thaersplatz, on which the writing "Blood & Honor" could be read openly. This clearly refers to the forbidden and fascist group 'Blood & Honour', in whose idea and methods attacks like the one in Hanau fit", one participant said angrily.
"It must be clear that racist and inhuman ideas are more and more becoming the explanation for poverty, destruction and problems of any kind. Therefore, a party like the AfD can establish itself, but also majority parties make racism and exclusion socially acceptable. We can see this in foreign policy and racist media power, which distorts social conditions and often conceals the true background. There is too little talk about what the real problems are. For example, greed for profit and egoism are causes that lead to poverty or flight. Something must change about this," said one activist.
Among the participants were also some Kurds, because the victims of the attack included some members of the Kurdish association in Hanau. One of the protesters said: "We as Kurds are confronted with fascism and death everywhere. In our homeland there is a war against us and here in Europe we have to fight for our rights, we are criminalized and at the same time we are victims of racist attacks and murders, like yesterday in Hanau.”
For the participants of the rally it was clear: Hanau is not an isolated case. #Riseup4Rojava Celle said: "It is necessary that people become aware of this reality, oppose agitation and don't give space to racism and fascism".
Hamburg
In Hamburg, 4,000 people commemorated the victims of Hanau. The demonstration started with a rally at the square in front of the AfD office. The slogan of the protest was: "All together against fascism!"
Nuremberg
More than 800 people from numerous organizations, parties, but also individuals gathered in Nuremberg for a spontaneously convened antifascist rally against right-wing terror. After a minute's silence for the victims of the attack in Hanau, several speeches were held. Besides the sympathy and compassion for the bereaved, the political message was clear: the second largest right-wing attack in the history of the Federal Republic of Germany did not come out of nowhere. Fascist ideas are penetrating society more and more, right-wing radicals see themselves as the military arm of a popular movement, call for violence, they arm themselves and they strike. They feel encouraged by the AfD and the right-wing populist and racist rhetoric from the "bourgeois middle", which is supported by people like Minister of the Interior Seehofer or FDP leader Christian Lindner.
In response to the Turkish Foreign Minister Mevlüt Çavuşoğlu, who today described the murdered people of Hanau as "his citizens", a representative of the Medya People’s House said: "The victims are the children of those who had to flee from Turkey because they are Kurds, democrats and leftists. The instrumentalisation of the victims of Hanau by a state which itself exercises a terror regime, is outrageous.”
The rally was followed by a spontaneous demonstration march through Nuremberg's city centre under the repeatedly chanted slogan: "All against fascism".
Also in the neighbouring town of Fürth, about 300 people gave an overwhelming sign of solidarity. A speaker from the Left said: "We have to make sure that the vulnerable groups of our society, which are in the deadly focus of the Nazis, get protection in order to be able to live safely and without fear in this country".

Giessen
In Giessen almost 500 people joined a vigil at the church square. Among the participants were the Kurdish community, grannies against the right, representatives of the church and the DGB. After a minute's silence, the brass musicians from the municipal theatre played. Mayor Dietlind Grabe-Bolz said: "Hanau is everywhere. And it can happen anywhere." 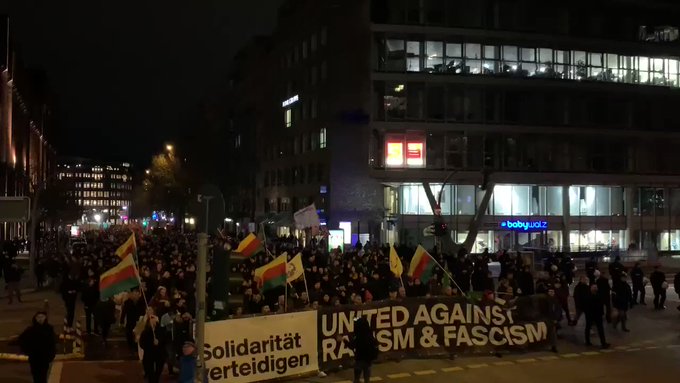 
In Bielefeld, around 500 people took part in a demonstration against right-wing terror.
Munich
In Munich, 2,000 people took part in a vigil at Odeonsplat
In Stuttgart, too, numerous people gathered in the evening to protest against terror from the right at a rally at the Schlossplatz in the city centre. Many participants held posters with inscriptions like "#Hanau. Shoulder to shoulder against fascism" in their hands. The alliance "Stuttgart against Right" had called for the rally.

Dresden
In Dresden, more than 400 people gathered for a rally at the Neumarkt.
Berlin
In Berlin, more than 5,000 people showed their colours at a demonstration at Hermannplatz. At a closing rally, activist Ario Mirzaie said: "Do not only complain about breaches in a dam but build new dams against racism and Nazis!”
Mannheim
In Mannheim, a rally took place at the market square, in which several hundred people took part.Stuttgart

Posted by maoistroad at 2:56 PM