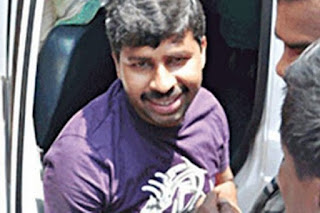 Accepting the request of ADG (Jail) Arun Ray, Azad called off his fast which was going on for the last 21 days. Azad’s associates Kamalakant Sethi and Asutosh Soren also ended their fast, said sources.
Azad and his six fellow inmates had been hospitalised in the Capital Hospital on April 6 after the condition of them turned serious as they have been on a hunger strike for the past few days. Later, under deteriorating health condition Azad and few others were shifted to SCB Cuttack.

Notably, Azad was lodged in the Jharpada Circle Jail here from 2011 and it was his fourth fast inside the jail in the past five years demanding fulfillment of the five point charter of demands which includes speedy trial, status of a political prisoner, regular court production for trial of the cases filed against him.

He alleged that the State Police intentionally booked him in old cases.

Posted by maoistroad at 9:54 AM