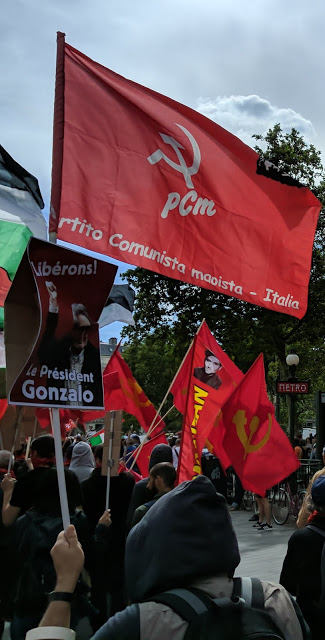 Revolution in our lifetime! 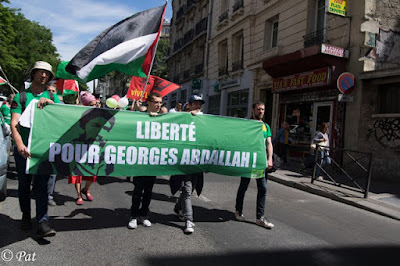 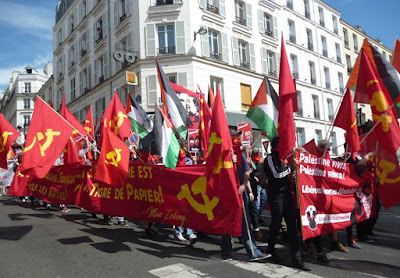 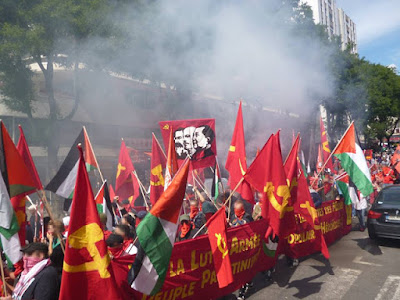 FROM ITALIAN COMRADES AT PROTEST

Important International Demonstration in Paris for the release of Georges Ibrahim Abdallah
About 300 comrades took to the streets for a long and popular march across Paris to shout loud and clear: “Freedom for Georges Ibrahim Abdallah! Palestine will win”.
The demonstration was convened as part of the long unified campaign ongoing for years in France and in many other countries of the world, which has made Georges a recognized comrade supported by many anti-imperialist and revolutionary realities organizations in Europe, the Arab world and many other countries.34 years in of unjust detention have not bent G.I. Abdallah, nor stopped the campaign in support of him.34 years during which US and French imperialism tried to silence his revolutionary voice in support of Palestine and the Arab masses.
The campaign has had different moments and different aspects, with every form, now avant-garde now mass, of manifestation during these years. And always G.I. Abdallah has taken side with the oppressed masses in revolt and arms, as well as his voice has never failed to support the revolutionary political prisoners in the world. The demonstration in Paris was a strong signal that this campaign will not stop until victory: the release of Georges Ibrahim Abdallah.
Along with the usual features of the campaign, this event has brought important new ones that can and must influence the development of this campaign.
Together with the forces that have always supported the campaign and led the demonstration in a solidarity united framework, this time there was a strong contingent, a red Maoist bloc, opened by the banner of the Jeunesse Communist Revolutionnaire, which brought to the battle for Georges in a solid and determined way, in defense of the armed struggle of the Palestinian masses, and gathered in its ranks comrades from French, Germany, Austria, Norway and other countries and a large Italian delegation, the most numerous of the delegations, formed by comrades, workers, proletarian women, engaged in the mass organizations such as the Proletarian Red Relief (SRP), the Proletarian Revolutionary Feminist Movement (MFPR), of the Slai Cobas for the Classist Union, led by the representatives of proletari comunisti-PCm Italia.  This strong presence has brought in the demonstration the battle to defend all the communist and revolutionary political prisoners in the world, carrying portraits of chairman Gonzalo, Ajith, a banner in support of the Italian political prisoner Nadia Lioce, for whom a strong campaign with the Mfpr in the front row is ongoing in Italy, and, for the first time in a demonstration of this kind, a banner for revolutionary political prisoners in India, Saibaba and others, carried by comrades of the International Committee in Supporting the People's War in India (ICSPWI).
The contingent launched slogans in support the People's War and Long Live Marx-Lenin-Mao.
This novelty in this demonstration considerably strengthens, expands, enriches and puts the campaign it in the global confrontation between imperialism and the liberation struggles of the oppressed peoples, in the contention between revolution and counter-revolution.
In that also are the grounds for the stubborn persecution against Georges Ibrahim Abdallah. And the battle for his liberation represents a battle for all the oppressed peoples developing armed struggle and people's war; and at the same time, today more than ever, the fate of revolutionary political prisoners is linked to the advancement of the people’s masses and the proletarian revolution.
Report by the Italian  delegation
Posted by maoistroad at 9:58 PM