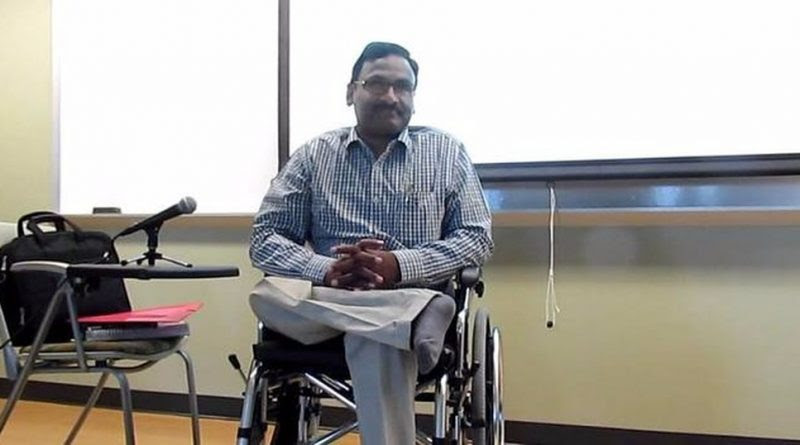 In 1980, Justice Krishna Iyer declared that prisons were “part of the Indian earth” and that the Indian Constitution could not “be held at bay by jail officials dressed in a little, brief authority”. The judge’s words found their way into a committee report written in the context of a proceeding taken up by the Gujarat High Court in 2004. The report revealed the many existing provisions through which prisoners can secure medical care in India, and the vision of justice propelling the doctors, lawyers and judges who formed a part of the committee.
Despite several such provisions, the condition of the wheelchair-bound English professor GN Saibaba, serving a life sentence in Maharashtra’s Nagpur jail, has edged to the point where he cannot withstand some of the painful ailments from which he suffers.
The non-fulfillment of his rights as a prisoner and as a person suffering disability – which he has detailed in numerous representations – suggest that the influence of such judicial recommendations over some sections of the prison system is slight. Since May 9, 2014, when Saibaba was first arrested, until his conviction in March 2017 for links with Maoist organisations, Saibaba has been in and out of prison at irregular intervals. Each stretch spent outside prison on bail was a race against time to save him from his ailments.
However, ever since Saibaba was sentenced to life imprisonment last year by a sessions court in Maharashtra’s Gadchiroli, his access to medical care has been even more restricted than it was when he was yet to be convicted, and the possibility of his dying in prison seems increasingly likely with each passing month.

Over the last few months, Saibaba, who suffers 90% disability from a post-polio paralytic condition,
has written missives from his cell in Nagpur Central Jail, detailing his failing health. During his first stint in jail, he was diagnosed with gall bladder stones, the risk of infection in the pancreas, a prior heart condition and breathlessness. He also needed therapy to salvage the use of his arm and spine. His condition is now substantially worse. He suffers from at least 19 ailments, many of which are life-threatening, and an undiagnosed lump is growing in his side. He suffers sharp pain while urinating, and has fallen unconscious from time to time in jail.
On April 2 and April 3, Saibaba was taken to Nagpur Medical College Hospital for diagnostic tests following an order from the Bombay High Court asking for his health reports. He was not allowed to meet his wife either on the way there or on the way back though she had applied for official permission to assist him. He has suffered permanent injury as a result of being mishandled by people who are unable to assist him appropriately when he has to be lifted from his wheelchair, for instance, to access the toilet when there is no wheelchair-friendly toilet available.

One would imagine that any relief for Saibaba after his conviction was entirely reliant on humanitarian intervention or goodwill, but there is a continuous history of legal provisions applicable to any prisoner in India that would suffice if these recommendations and judgments were actually implemented. The All India Jail Reforms Committee (1980-’83), or the Justice Mulla Commission Report on Prison Reforms (1982-’83) provided the most exhaustive list of recommendations and prescriptions to date for the treatment of prisoners. Aside from the physical well-being of prisoners, it asks that prison authorities be appreciative of the perceptions, thinking and emotions of condemned prisoners.
However, Saibaba’s account of being denied access to a toilet he can use during his imprisonment without compromising his dignity or personal hygiene, contravene the Mulla Commission’s recommendations on the need for hygienic conditions in prisons. Chapter 29 of the report in particular has been repeatedly cited in judgments that uphold its recommendations on medical care in prison.
Some of the provisions for prisoners hail from the colonial period. For instance, the medical officer, appointed under the Prisons Act of 1894, has powers to transfer a prisoner whose health is in danger to wherever medical care is available. The officer also has the power to order a change in a prisoner’s diet if needed for medical reasons. Section 39 of the Prison Act and paragraph 547 of the Bombay Jail Manual prescribe the creation of a jail hospital. Recommendations from several committees have also suggested that specialised medical care be made available in jail hospitals. Section 3 of the Gujarat (Removal of Prisoners) Order of 1976 allows for the medical officer to recommend that a prisoner be accommodated outside the prison if their health is endangered.


The right to life

Article 21 of the Constitution, which upholds the right to life and liberty, is the foundation of various judgments since 1964 that have held that damage to any limb or faculty of a prisoner, including the faculties of thinking and feeling, were a contravention of the right to life. In 2005, the Gujarat High Court cited the Sunil Batra case, particularly the apex court judgment of 1981, which stated that the lives of prisoners could not be reduced to mere animal existence.
In 1996, a bench comprising Justices Kuldip Singh, BL Hansaria, and SB Majmudar detailed judgments that had responded to challenges to prison conditions. Of particular relevance to Saibaba’s case is the opinion of the court disallowing the segregation of prisoners, or solitary confinement of a Naxalite, as a means to curb unfavourable political beliefs in Bhuvan Mohan Pattnaik v State of Andhra Pradesh.
In 2015, when Saibaba was granted bail, the Bombay High Court, with a division bench of Chief Justice Mohit Shah and Justice SB Shukre observed, “We are satisfied that if Mr Saibaba is not released on temporary bail for medical treatment and supportive care, there is a risk to his life and health. After having considered his medical condition, this court would be failing in its duty to protect his fundamental right.” Thus there has been no dearth of interventions by the judiciary to ensure Saibaba his rights.
As a person with disability, Saibaba should have been able to call on another set of rights, for instance, those under the United Nations Convention on the Rights of the Persons with Disabilities, which India has ratified. The United Nations Standard Minimum Rules for the Treatment of Prisoners also urges prisons to ensure prompt medical access in urgent cases.
In March, the Supreme Court of India upheld the right of human beings to die with dignity. The right of people with disability to live, even when they are convicted prisoners, also deserves to be safeguarded.
Posted by maoistroad at 1:50 PM