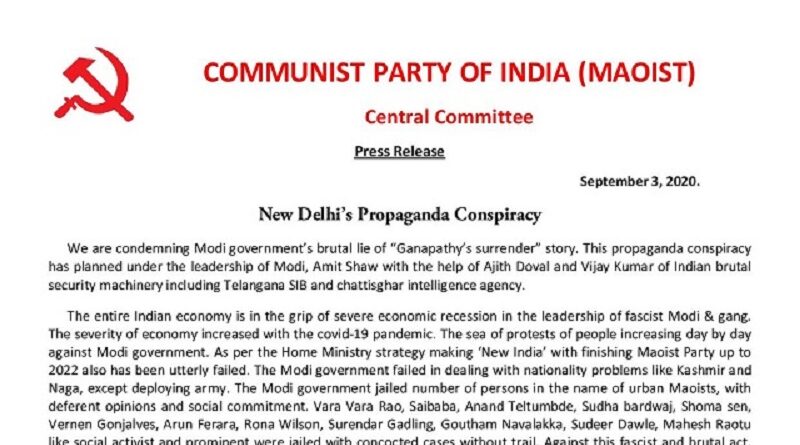 Press release
September 3, 2020
New Delhiʹs Propaganda Conspiracy
We are condemning Modi governmentʹs brutal lie of “Ganapathyʹs surrender” story. This propaganda conspiracy has planned under the leadership of Modi, Amit Shaw with the help of Ajith Doval and Vijay Kumar of Indian brutal security machinery including Telangana SIB and chattisghar intelligence agency.
The entire Indian economy is in the grip of severe economic recession in the leadership of fascist Modi & gang. The severity of economy increased with the covid-19 pandemic. The sea of protests of people increasing day by day against Modi government. As per the Home Ministry strategy making New Indiaʹ with finishing Maoist Party up to 2022 also has been utterly failed. The Modi government failed in dealing with nationality problems like Kashmir and Naga, except deploying army. The Modi government jailed number of persons in the name of urban Maoists, with deferent opinions and social commitment. Vara Vara Rao, Saibaba, Anand Teltumbde, Sudha bardwaj, Shoma sen, Vernen Gonjalves, Arun Ferara, Rona Wilson, Surendar Gadling, Goutham Navalakka, Sudeer Dawle, Mahesh Raotu like social activist and prominent were jailed with concocted cases without trail. Against this fascist and brutal act, the Modi government facing the wrath of the people domestically and internationally. The warmonger and frenzied Modi & saffron gangs utterly failed in dealing with neighboring countries. Modi government utterly failed in solving the recent tussle in Galvan valley with China, which defamed the government at home and abroad. The government is in a desperate condition. The government doing malicious propaganda with concocted lies, along with fascist ʹSAMADHANʹ repression on our party and people. Despite all these things, our party and movement has been strengthening in some states like Telangana and elsewhere.
Comrade Ganapathy had voluntarily took the decision to quit the partyʹs General Secretary responsibility two years ago due to age and common ailments. It is a common thing in everybodyʹs life. It has no relation with this brutal lie. To deceive the people and sidetrack the entire population, Modi government maliciously propagating the com Ganapathi ʹsurrender storyʹ.
In brief, the fascist Modi government which has saffron ideology been failed internally and externally in all fronts. To build confidence in the corporate forces and foil confidence of people upon our party, these traitors prepared this “high-tension surrender story”. We are appealing the people to throw away these traitors from this Indian soil. The government is trying to defame our partyʹs leadership internationally. Our central committee has committed to the peoplesʹ cause and strong with lot of ideological and political experience. We are appealing working class, peasants, petty bourgeoisie, all democrats, prominent persons, progressive people, patriates, anti- imperialist forces to condemn the paid corporate mediaʹs cruel propaganda.
Once again, we condemning Modi governmentʹs brutal lie of surrender story. We are declaring that, we shall continue the fight against the ruling classes, under the leadership of our central committee with strong determination until the success of the revolution.
With revolutionary greetings 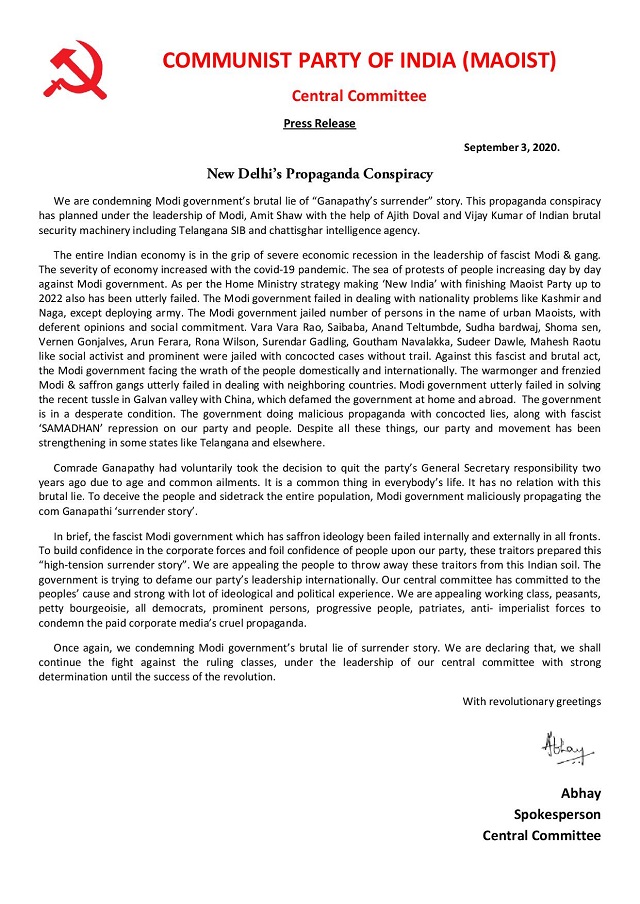