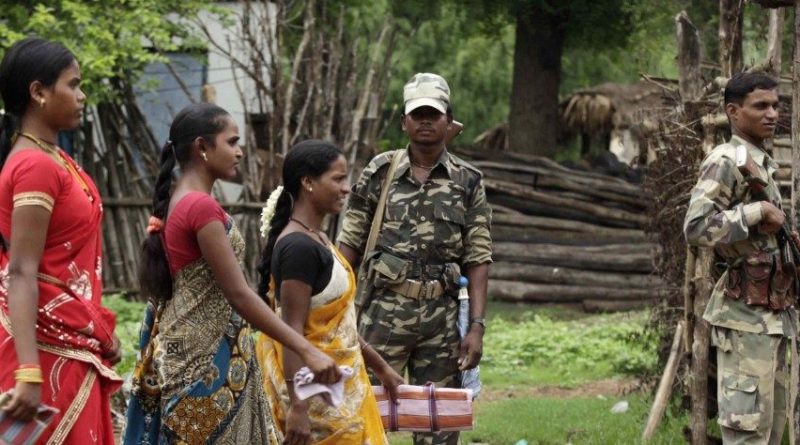 In Bastar, instances of state violence have been normalised over a decade. In the run-up to the Lok Sabha elections, they are virtually non-issues.
This is the first article in a two-part series on the February encounters in Bastar.
There are things we do every day but there is no knowing when it will be the last time we do them. This applies to anyone anywhere, but more so to those in conflict zones where “war” intrudes lives without a warning in unforeseen ways.
Podiyam Sukki, Naxal, Bastar attack, Maoist security forces
It was something like that for Podiyam Sukki that early morning on February 2, 2019, when she left her four sleeping children, picked up her axe, and joined two other women from her hamlet, Kalmu Deve and Podiyam Hungi. They started for the forests at some distance from their village Godelguda in Sukma’s Konta tehsil, to collect firewood.
They crossed the village pond and were walking on an open stretch interspersed with a few trees and tendu bushes – not more than half-a-kilometre from the village – when they noticed security forces coming from the opposite direction. They had just turned around out of fear when they heard a gunshot. Alarmed, they lifted their arms and axes shouting that they were outside just to cut wood. But before they knew it, Sukki and Deve had been hit while a bullet missed Hungi only because of her short stature.
By the time we reached Godelguda, it was nightfall. In the headlights of the motorcycles, we could identify the outlines of the houses and courtyards that we passed. We stopped in an open space close to a house where a few women were sitting on the mud-caked floor. A beautiful and healthy infant lay asleep on a colourful cotton cloth. The child all of three months was the youngest of Sukki’s four children.
Some of us sat on the small string cots that were brought out for us when Deve and Hungi arrived followed by Deva, Sukki’s husband, along with his other three children in tow; the oldest was six-year-old Joga. Deve and Hungi were young women in their twenties. Deve’s face was full of consternation as she recounted what had happened that morning. “Sukki was hit in the stomach,” she said. Pointing at her upper left thigh she added, “I was hit here and became unconscious; only Hungi was left who could help us.”
Hungi, a slender woman, still distraught, said, “I managed to somehow drag Deve to the village. Sukki was calling out to her mother and asking for water when we left her.”
Adivasi leader Soni Sori, who had gone to the village soon after the incident with a team including Aam Aadmi Party members and Adivasi activists, said, “Upon learning what had happened, a few village women went to the spot with water for Sukki and saw security forces slipping a Maoist uniform over her. When they protested, the forces wrapped her in a polythene sheet instead, even though she was still alive and asking for water.”
Deva said that his family members informed him about the incident over the phone. He was in a Telangana village where he had gone to work in the fields as a casual labourer only ten days earlier. He said that the security forces took his wife, who was around twenty-seven years old, with them to the CRPF camp in Puswada, saying that there was a field hospital there.
By the time his mother and others of the village reached the camp, Sukki had died. Her dead body was returned late night that day, after his relatives were kept waiting for several hours. The forces had also brought undue pressure on the family to cremate the body quickly without completing the customary rites.

Killed in an encounter, crossfire or just killed?
Local newspapers reporting the incident soon after it occurred quoted the then superintendent of police of Sukma district, Jitendra Shukla. The SP first claimed that CRPF forces from the Puswada camp and district police personnel had gone to Rangaiguda forests on an area domination exercise, and were returning from there when there was an encounter with Maoists close to Godelguda in which a Naxali woman was killed and another Naxali woman was injured and apprehended.
In the face of allegations of a fake encounter, the SP modified his statement slightly, accepting that the women were civilians (“they were not in Maoist uniforms”) and claimed that they were killed in crossfire d uring an encounter with the Maoists.
However, the SP’s encounter and crossfire stories are at odds with what Deve, Hungi, and other villagers have maintained – that there were no Maoists around that day and there was no exchange of fire. The secretary of the Konta Area Committee of the CPI(Maoist) also reiterated in a press release (dated 5 February 2019) that there was no Maoist movement in the area that day.
Local journalists who went to the spot found fallen axes but curiously, an absence of blood-stained soil or grass, suggesting an attempt at tampering evidence by the forces. They also discovered that the site of the “encounter” was not a forest as is usually the case but open land with sparse tree cover.
From the available facts, it is clear that three bullets were fired – deliberately – at the only three persons who were out on that stretch of open field that morning. Three young women were killed on a fleeting suspicion of being Maoists.
Compensation as justice?
Kawasi Lakhma, the Congress MLA of Konta constituency – in which Godelguda falls – and a minister in the state cabinet, has also maintained that the encounter was fake, that the victims were village women, and that no weapons were found on them. In a letter to the chief minister on February 8, 2019, he said that such incidents “erode people’s confidence in the government.” Indeed, angered by the killings, Adivasi organisations like the Sarv Adivasi Samaj called for a Sukma bandh.
The family of the deceased and the injured have since received monetary compensation from Kawasi Lakhma (Rs 5 lakh to the family of the deceased and Rs 1 lakh to the injured) and from the district administration (Rs 25,000 and Rs 20,000 respectively). SP Jitendra Shukla informed the press three days after the incident that an FIR had been lodged in the Polampalli thana against “unknown persons for murder” and a judicial enquiry had been initiated (Patrika, 6 February 2019). However, more than two months after the event, there is no news of any development related to the enquiry.
Faith in enquiries has understandably shrunk in Bastar. The widespread feeling is one of mistrust, as voiced by Adivasi activist and journalist Lingaram Kodopi. After investigating the present incident, he observed, “What use are such enquiries that are conducted by the police into police excesses [especially] when what occurred is known from the start? They are mere eyewashes and are soon put in cold storage.”
He added, “When the forces go to the jungle on a Maoist operation, perhaps they go thinking they are going on a shikar (hunting). That is why along with his gun, a jawan also carries a polythene sheet and rope. After the shikar, dead bodies of Adivasis are wrapped in these polythene sheets, tied with a rope, and paraded in front of the media and public as Maoists.”
If the rule of law prevailed in Bastar, CRPF jawans who fired the three shots would have been booked under IPC sections 302 (murder) and 307 (attempt to murder), arrested and tried like anyone else who is so charged. But the rule of law does not prevail in Bastar.
Bela Bhatia is an independent researcher, reporter and human-rights lawyer based in Bastar, south Chhattisgarh.
Posted by maoistroad at 3:57 AM