in support of the People’s War in India and against the “prahar military campaign” waged by the fascist Modi government! (CI-IC.ORG) 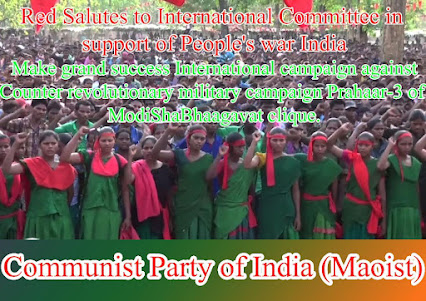 November 22, 2021
Editorial: We call upon the international proletariat and the peoples of the world to make a successful International Day of Action on November 24 in support of the People’s War in India and against the “prahar military campaign” waged by the fascist Modi government!


We from this tribune of the international proletariat greet this call of the Committees with deep emotion and high revolutionary optimism and call for support to make the International Day of Action a resounding success as a great and timely initiative with a just and correct content and condemn, brand the Modi government and the fascist government of Modi who leads the old Indian state in the service of imperialism, the native big bourgeoisie and the landlords.


This brilliant initiative of the Committees of Galicia and Italy has the full support and recognition of the Communist Party of India as we read in the communiqué that we have published in the past days and that today together with the call and the posters allusive to the campaign we publish in this same editorial section to highlight its importance and significance.


As the Galizia and Italy Committees write in their call: “In India a process of liberation of the oppressed classes is developing”. This is based on the peasantry and with the proletariat as the leading class, therefore, as the comrades write it is “very hopeful for the proletariat and the oppressed of the world, a revolution of new democracy through the People’s War led by the Communist Party of India (Maoist) and where the popular masses exercise the popular government through the so called “Janatana Sarkar” (Revolutionary People’s Committees)”. (Revolutionary People’s Committees) in thousands of villages in the liberated areas in many states of India, mainly in the central and north-eastern regions, with the backing of the people’s militia and the People’s Liberation Guerrilla Army”.


We repeat, the call is a great initiative of the Committees of Support to the People’s War in India of Galicia and Italy, which we salute and from the first moment we have been supporting with the publication of its call by these committees, with the publication of the press release of the CPI (M) : “Make the International Day of Action a success” on November 24 against the “prahar military campaign” carried out by the fascist government of Modi, 16. November 2021 and the posters it has issued for this campaign and international day.


Now, once again, we take a firm stand for the International Campaign in Support of the People’s War in India and for the International Day of Action and call upon all parties and organisations of the international communist movement, all revolutionary, progressive organisations and men and women of the peoples of the world to make the international day of action of this campaign on September 24 a great success, for which it is required to deploy all possible initiative with immense class optimism and all necessary revolutionary energy; developing in the different countries, in the countryside as well as in the cities, all kinds of actions and mobilisations to serve to smash the plans and genocidal campaign of the fascist Modi government and to win a new great international victory for the CPI(M), the people’s war in India and the proletariat, peasantry and other revolutionary classes who are carrying forward the new democratic revolution with people’s war in that immense country, which has an immense population, a vast peasantry that fights led by the proletariat and its Marxist-Leninist-Maoist Party with weapons in hand to conquer the land, to put an end to the domination of imperialism, bureaucratic capitalism and semi-feudalism as part of and in the service of the world proletarian revolution. With our international action we are inflicting a new defeat on imperialism, reaction and revisionism in this new period of revolutions.

We stress the importance of the people’s war in India for Maoism, its importance for the defence of Maoism against the new rotten revisionism, which denies the democratic revolution, denies the peasants’ struggle for land as the basis of the struggle against imperialism, in a word denies the world proletarian revolution by denying the main mass basis of the democratic revolution. Without leading the peasants’ struggle for land, any call to “fight against imperialism” is fallacious, pure demagogy to surprise the unwary.
Lenin pointed out that in the revolutionary movement there were two great forces: the international proletarian movement and the national liberation movement: the former is the movement of the proletariat throughout the world and the latter is the movement of the oppressed nations. Lenin said that it was a movement of great perspective and that it would make great contributions that could not be imagined at that time.
The international day of action has a great significance for the revolution in India because: In 2009, the Indian ruling classes framed operation Greenhunt (war against the people) with the aim of eradicating the revolutionary movement in the leadership of the imperialists. Countless international proletarian organisations, left organisations, democratic organisations and revolutionary organisations demonstrated and opposed this operation.


November 24, 2021 is the 10th anniversary of the cowardly assassination of comrade Kishenji by the old Indian state.


Moreover, as stated in the CPI(M) communiqué, it recognises the role of the convening committees as follows: in 2011, after the martyrdom of comrade Kisanji (member of the political bureau), in Milan, Italy, many proletarian organisations, other Maoist organisations and parties unanimously formed an International Committee for the Support of the People’s War in India (ICSPWI). For the last 10 years it has been supporting the People’s War in India with an international proletarian class perspective.


To conclude our call for full and unconditional adherence to the international Day of Action, we reproduce the final part of the CPI(M) communiqué:


We call upon the masses to intensify the mass uprising for the victory of the Indian new democratic revolution. Let us fight to the end and achieve the final victory.


Hold rallies and demonstrations in the villages against the prahar on November 24!


Conduct a large-scale propaganda campaign and denounce the myth of the good performance of the Hindutva forces and the prahar plan!


Burn the effigies of Modi-Amitshaw-Bhagavath and expose their repressive plan and send reports to international human rights organisations, including ICSPWI!

The slogans of the International Day of Action and the new campaign are:
STOP PRAHAAR-3!
DEATH TO THE FASCIST AND GENOCIDAL MODI REGIME!
LONG LIVE THE PCI(MAOIST)!
LONG LIVE PEOPLE’S WAR IN INDIA!


The editorial staff of ci-ic.org
Posted by maoistroad at 7:10 AM