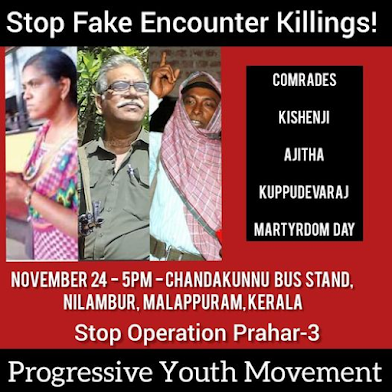 24 November 2021 marks the 5th martyrdom of Comrade Ajitha and Kuppudevaraj who were murdered by Thunderbolt commandos of Pinarayi Vijayan's CPI(M) led LDF government.
24 November 2021 also marks the 10th Martyrdom of Comrade Kishenji who was a Polit Buro member and Military leader of CPI Maoist. Kishenji was killed in a fake encounter by Trinamool Congress Government led by Mamta Banerjee.
Both revisionist and Reactionary CPI(M) and TMC are together with the fascist, RSS in the war against Maoists.
Progressive Youth Movement will remem
Posted by maoistroad at 10:00 PM