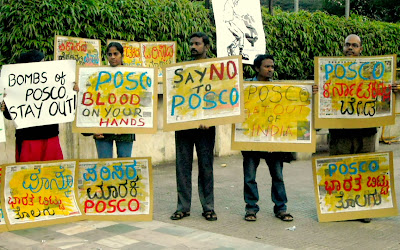 New Delhi, January 15: A protest was organised by 14 groups under the banner of Delhi Solidarity Group at Paryavaran Bhavan today to protest the Environmental Clearance given to POSCO project in Odisha in violation of the Honorable National Green Tribunal’s decision and the Meena Gupta Committee findings. The groups demanded cancellation of the clearance until recommendations of the NGT and Meena Gupta Committee are fulfilled as well as a complete halt on forceful land acquisition and destruction of forest and beetel vines. The action was organised in solidarity with POSCO Pratirodh Sangram Samiti (PPSS) as part of observing January 15th as National Protest Day against POSCO.
In the ongoing case the NGT had decided to stay the earlier clearance given to the project even while the question of forest clearance has not been settled. Despite this, the MoEF has cleared the project just before the arrival of the South Korean President, Ms. Park Geun Hye. On 30th March, 2012, in the matter of Prafulla Samantra v/s Union of India, the National Green Tribunal suspended the clearance given to the project by the ministry untill a full review by a committee consisted of judicial and expert members of the committee. The tribunal in its order even reduced the total capacity of the project from 12 MTP to 4 MTP. But the ministry has again given clearance to the project without following these conditions and more specifically without an MoU of the Project proponent i.e. POSCO with the state of Odisha. To note, the MoU had lapsed in June, 2010.
The Meena Gupta Committee in 2010 too reported the Environmental Clearance and the Forest Clearance as illegal and it recommended for additional study and due compliance of all the conditions. But, the Environment Ministry which is incharge of ensuring environment policy for the country overlooked all the conditions, violations by the project proponent, state and more importantly the ongoing struggle against the project by the people for their right to life and livelihood for last seven years now. 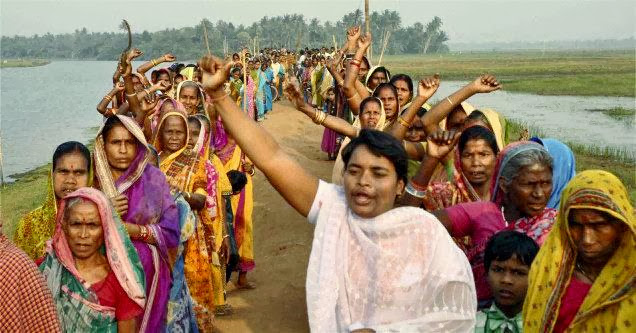 Delinking of Port Project is not enough, the clearance should ensure of no mining which is already proposed as the project will include iron ore mining for over 30 years (total 600 million tones) at captive mines located in Keonjhar and Sundergarh district of Odisha, destroying the beautiful Khandadhar mountain and disturbing the tribal culture of the area.
When none of these conditions were looked into and recommendations ignored then how can the Ministry go ahead and clear the controversial POSCO Project at the cost of life and livelihood of such a large population?
Delhi Solidarity Groups demanded:
1.      The Environmental and Forest Clearance should be canceled until the recommendations of the NGT and Meena Gupta Committee are fulfilled
2.      Forceful land acquisition and destruction of forest and beetel vines should be stopped
3.      Construction of boundary walls for the project should be stopped immediately, since there is no MoU and any construction is completely illegal